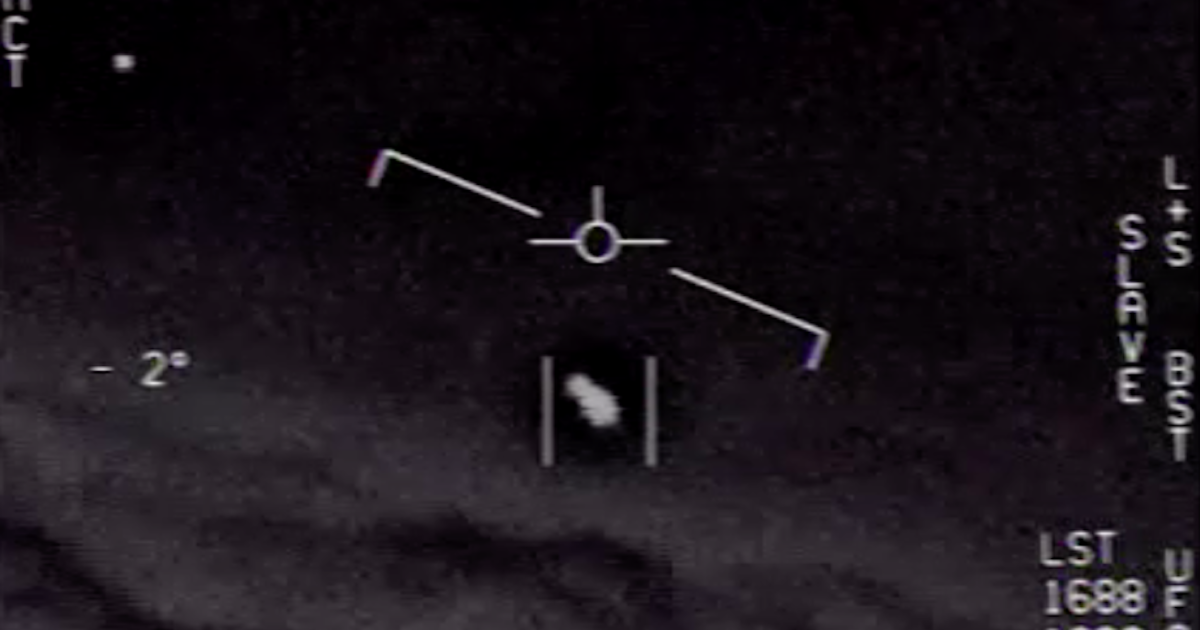 Ahead of a June deadline for an intelligence report on UFOs, the mystery over what the U.S. government calls “unidentified aerial phenomena” was featured on 60 Minutes for the first time. Navy pilot witnesses and former government officials argued this is a serious issue.

The declassified report on UFOs scheduled to be handed over next month was mandated thanks to the $2.3 trillion bill that former President Donald Trump signed into law in December, which contained a “committee comment” from the Senate Intelligence Committee, calling upon the Office of the Director of National Intelligence and the Pentagon to provide what they know.

Navy pilots such as Cmdr. Dave Fravor, Lt. Cmdr. Alex Dietrich, and former Lt. Ryan Graves, the former head of the U.S. government’s Advanced Aerospace Threat Identification Program, Luis Elizondo, and a former deputy assistant secretary of defense for intelligence, Christopher Mellon, all weighed in on Sunday to say that UFOs are real, though what, exactly, they are remains a mystery.

Fravor, the commander of an F/A-18F squadron on the USS Nimitz at the time of a November 2004 encounter with a UFO, and Dietrich, who had never spoken publicly about it until Sunday, spoke about what they saw when the ship asked them to investigate while separately piloting naval aircraft roughly 100 miles off the coast of San Diego, describing their bizarre encounter with a white “Tic Tac”-like UFO, the existence of which was also caught on camera and radar by the Navy, which they said they spotted hovering above a patch of whitewater in an otherwise calm ocean. They said that they and their respective co-pilots watched for about five minutes.

“So, as we’re looking at this, her backseater says, ‘Hey skipper, do you —‘ And about that got out, I said, ‘Dude, do you see that thing down there?’ And we saw this little white Tic Tac-looking object, and it’s just kinda moving above the whitewater area,” Fravor said, adding that its movements were “just like a ping pong ball — very, very random.”

Dietrich described its movements as looking like what happens if you drop your phone and it bounces around. Fravor said he spiraled down to get a closer look while Dietrich’s plane circled above.

“The Tic Tac is still pointing north-south — it goes ‘pop’ and just turns abruptly and starts mirroring me — so, as I’m coming down, it’s coming up … It was aware we were there,” Fravor said. “I want to see how close I can get, so, I go like this, and it’s climbing still, and when it gets right in front of me, it just disappears … Disappears, like, gone … When it turned and started coming up, it was like, ‘OK!’ Because we have nothing that goes that fast and just starts climbing at will.

“I felt the vulnerability of not having anything to defend ourselves, to not having any rounds, anything on the rails. If this was in fact a hostile threat, and we were engaged … I felt vulnerable, and then, I felt confused when it disappeared.”

The duo said the UFO appeared on the USS Princeton’s radar 60 miles away a few seconds later, and the “Tic Tac” was also caught on infrared video by another flight crew before it accelerated away. Fravor and Dietrich said they reported it right away and that the reaction on the ship was mostly to laugh about it, with Fravor saying that the crew “started giving us a lot of grief,” while Dietrich said they were met with “ridicule” as crew members proceeded to play Men In Black, Independence Day, and Signs on the ship’s TV.

Fravor said he believed the admiral staff made some phone calls but didn't take it too seriously.

“I’m not a UFO guy,” Fravor said. “Oh there's definitely something that — I don't know who's building it, who's got the technology, who's got the brains. But there's something out there that was better than our airplane.”

Last year, videos from the Navy were released through the Freedom of Information Act that showed UFOs moving at incredible speeds and performing impressive aerial maneuvers. One of the videos was shot in November 2004, featuring the so-called Nimitz encounter, while the other two were shot in January 2015. The three videos were code-named “FLIR1,” “Gimbal,” and “GoFast.” In the 2015 videos, Navy pilots can be heard expressing disbelief. All three UFO videos were captured by Navy F/A-18 Super Hornets.

The videos were made public and published in part through efforts by To The Stars Academy, which was founded by Tom DeLonge, a founder and vocalist for the rock band Blink-182. Elizondo worked to declassify the videos, and Mellon told 60 Minutes he then leaked them to the New York Times. These videos are said to have been a part of the Advanced Aerospace Threat Identification Program, which was founded in 2007 at the insistence of then-Democratic Senate Majority Leader Harry Reid but that the Pentagon said ended in 2012.

The Defense Department announced in August that it had approved the creation of an Unidentified Aerial Phenomena Task Force and that the group will be led by the Navy under the “cognizance” of the Office of the Undersecretary of Defense for Intelligence and Security.

Mellon, who had worked at the Pentagon under Presidents Bill Clinton and George W. Bush, said, “In the case of the Nimitz, these vehicles seem to have unlimited loiter time, which we don’t have. We’re limited in terms of altitude. It’s hard to design something that functions well at ground level that can go to 60,000 or 80,000 feet … and then drop down to the deck or drop to 20,000 feet, and it’s like a straight vertical line … in seconds. … I’ve talked to some of the radar operators who’ve observed that. Then, the acceleration is far beyond anything we’re capable of … There’s nothing we can build that would be strong enough to endure that amount of force and acceleration.”

Elizondo, who spent a couple decades helping run military intelligence operations before joining the AATIP, said in his interview, “Imagine a technology that can do 6 to 700 G-forces, that can fly at 13,000 miles an hour, that can evade radar, and that can fly through air and water and possibly space, and oh, by the way, has no obvious signs of propulsion, no wings, no control surfaces, and yet still can defy the natural effects of Earth's gravity. That's precisely what we're seeing.”

Graves said that in 2014, his own F/A-18F flight crew repeatedly detected UFOs in restricted airspace close to Virginia Beach, saying that this occurred “every day for at least a couple years.” He speculated it was a “threat observation program” potentially of Russian or Chinese origin and said he was worried because “if these were tactical jets from another country that were hanging out up there, it would be a massive issue, but because it looks slightly different, we're not willing to actually look at the problem in the face. We're happy to just ignore the fact that these are out there, watching us every day.”

The Pentagon has recently begun confirming the authenticity of leaked UFO videos and photos, though it has not said what conclusions it has reached about them. The Biden administration may miss the deadline to release its UFO report, according to Sen. Marco Rubio, who was chairman of the Senate Intelligence Committee when it wrote up a 180-day directive for such a disclosure. The deadline is June, and a spokesperson for Director of National Intelligence Avril Haines would tell the Washington Examiner only that the intelligence community is “aware of the requirement and will respond accordingly.”

Rubio told 60 Minutes: “There's a stigma on Capitol Hill. I mean, some of my colleagues are very interested in this topic and some kinda, you know, giggle when you bring it up, but I don't think we can allow the stigma to keep us from having an answer to a very fundamental question.”