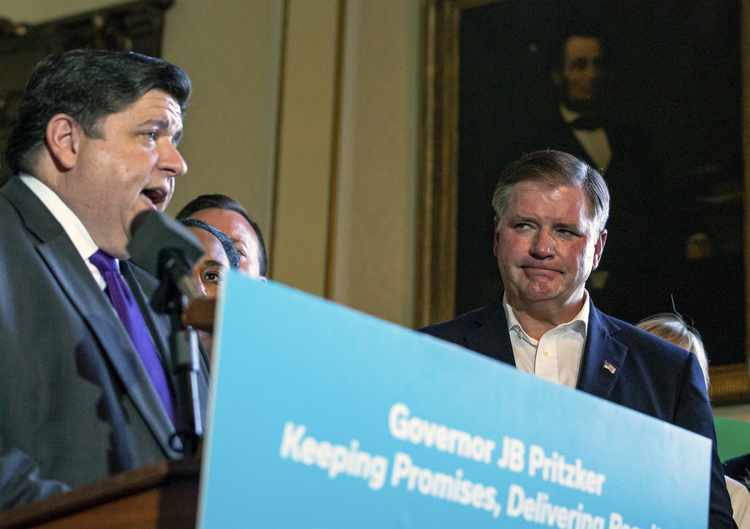 Among all the bad policy coming out of Springfield, Ill., let’s celebrate the occasional glimmer of good sense.

But first, some background:

Illinois’s legislature passed legislation on policing and related matters last week in the dead of night. The 764-page bill passed the state Senate at 4:49 a.m. after being introduced and distributed to the members at 3:04 a.m. Only a few legislative insiders could have possibly known what was in the bill before voting; the rest of the legislature, first seeing the measure upon its introduction, voted blind.

Only after the Democrat majority passed the bill are we learning what’s in it — and there’s little that’s good.

The legislation has been assailed as radical and anti-police for good reason. Consider, for example, this nugget from page 50: Under current law, a complaint filed against a police officer is required to be supported by a sworn affidavit from the person filing the complaint and provides that anyone filing false information shall be referred for prosecution. The bill eliminates both the requirement for the sworn affidavit and referral for prosecution for false complaints.

This and other provisions declare open season on law enforcement. Weakening law enforcement further in a state already riven by soaring crime rates unleashed by lax prosecution of basic criminal laws will make Illinois a more dangerous and less attractive place to live.

But, one provision in this bill reflects an idea that needs to be constantly reinforced: Government should help its citizens, not hurt them.

I have argued elsewhere that Illinois government has become predatory — that it focuses on raising money to serve the people in government instead of focusing on serving the general public. A predatory government weighs heaviest on those who earn the least. Examples of predatory policies include the myriad fees, fines, rules and gotchas imposed — and the absurd penalties applied for minor infractions of this web of rules.

A young friend of mine, a high school graduate working his way into a skilled trade, would drive to visit his girlfriend. He earned about $13 an hour. Sometimes, he didn’t have money in his pocket for tolls and he didn’t have credit to get the transponder that would cut his toll costs in half.

Back to my story: My friend did not pay about $30 in tolls. Shame on him — but note that the tolls that are small for many were more than he could afford on a daily basis. His minor infraction, which he ignored because he didn’t have the money anyway, turned into $2,500 in fines, as well as a suspended license — which led to the loss of his job — before I got involved.

While the Illinois Tollway authority has since then significantly reduced some of its penalties, government for people with low to moderate incomes is often Kafkaesque: a small mistake in dealing with government or error in judgment leads to cascading consequences that bear no proportion to the original mistake.

While not unique to Illinois, this is particularly true there because of the state’s financial crisis. Making government work for ordinary citizens is a secondary concern for leaders obsessed with finding money to fund the over-promised, under-funded public pensions.

The folks running our government, who campaign on imposing a $15 minimum wage on small businesses, have legislated a system of taxes, tolls, fees and fines that lower income residents can’t afford. And, as in the case of my friend and others, our government routinely forces people into debt and out of jobs in its search for revenue.

Is “safety” a reason or just a rationale for red light camera tickets? Are high highway tolls and gas taxes fair to those who make less? These and other petty revenue collection devices that then require enforcement hammer the less well-off. A bankrupt state that forces its own citizens into bankruptcy is a predatory state.

The good news in this bad bill is that motorists would no longer lose their licenses as a consequence of unpaid red light and speed camera tickets. That’s a small but important win for the people of Illinois, but what of the tickets themselves and the exorbitant penalties and fees that accompany this policy?  Why not abolish these as well?

We need a thorough rethinking of all aspects of our government. We need leaders looking for ways to help people rise instead of holding them down or shaking them down.

PS: The young friend of mine I mentioned above recently moved to Texas. Why? He aspires to start his own business some day and he believes it’s easier to do that in Texas than in Illinois.

Richard Porter is a lawyer in Chicago and Illinois’s national committeeman to the Republican National Committee.