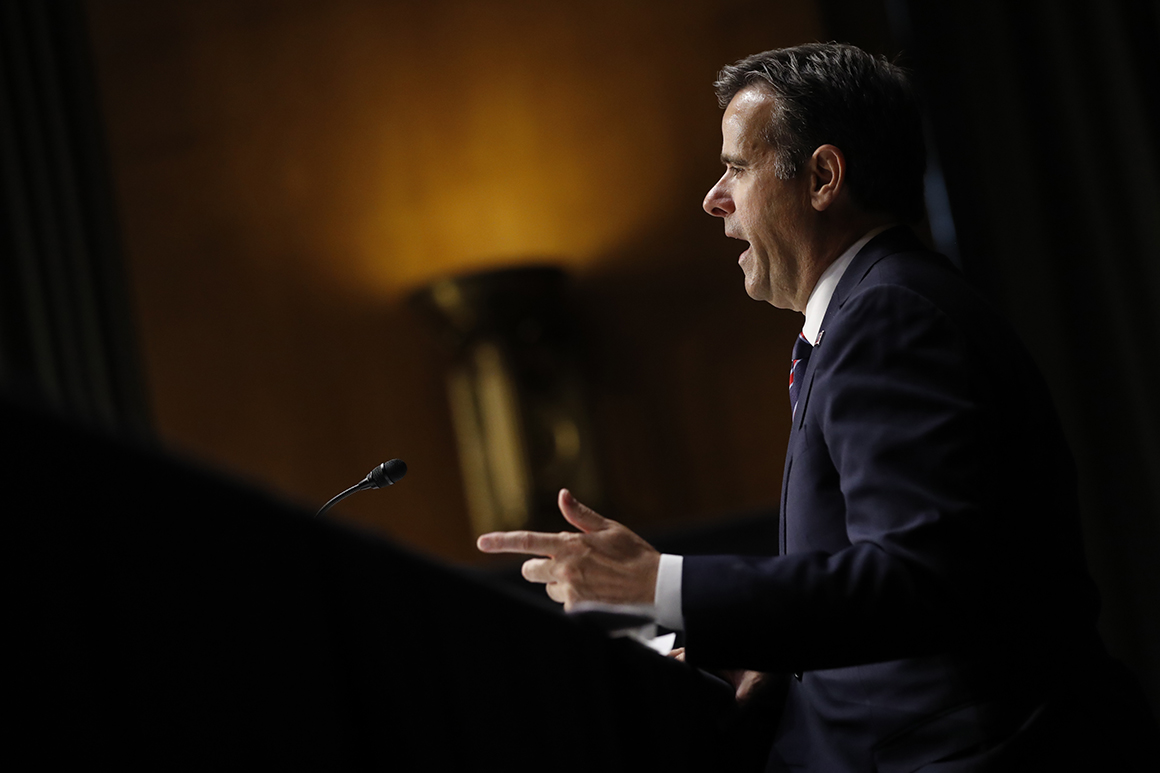 The press conference centered around menacing emails that had been sent to Democratic voters warning them to vote for Trump “or we will come after you.”

Ratcliffe attributed the emails to Iran but said they were “designed to intimidate voters, incite social unrest, and damage President Trump,” raising immediate questions about how threatening Democrats to vote for Trump could be aimed at damaging the president’s re-election bid — and how the intelligence community had made that determination within 24 hours of the messages.

Ractliffe also contrasted Iran’s actions with those of Russia, adding, “although we have not seen the same actions from Russia, we are aware that they have obtained some voter information just as they did in 2016.”

Ratcliffe, who has come under fire from Democrats since his confirmation in May, had decided on his own earlier on in the day to hold the press conference about the spoofed emails, the officials said. The FBI and CISA joined in on the briefing so that the warning about Iranian and Russian interference in the presidential election would be seen as independent and apolitical.

Journalists were given a roughly 30-minute warning about a forthcoming “election security” announcement. The seven-minute briefing, during which the officials didn’t take any questions, was hastily arranged and rushed, officials said, to avoid conflicting with a rally Trump was scheduled to give that night.

The unusual announcement prompted days of leaks and counterleaks over whether Iran or Russia represented the greater election threat, and set off a fresh round of criticism from Democratic lawmakers.

It wasn’t the first time Ratcliffe has raised hackles on Capitol Hill: He received bipartisan criticism last month when he declassified a Russian intelligence assessment that was previously rejected by Democrats and Republicans on the Senate Intelligence Committee as being potential Russian disinformation. He also scaled back election security briefings to lawmakers over the summer because of leaks, prompting outrage from Democrats. And earlier this month he appeared to reveal that the FBI was investigating a matter related to Joe Biden’s son Hunter in remarks that some law enforcement veterans deemed inappropriate.

Last week’s briefing about Iran and Russia was meant to be a kind of victory lap — government analysts and private sector investigators had been able to attribute the influence operation to Iranian hackers within a matter of hours, whereas it usually takes months for investigators to confidently determine the origins of a foreign cyberattack. The attribution was aided by a series of clumsy mistakes the hackers made, Krebs told reporters in a separate briefing last week.

In their intimidating emails, the Iranian hackers had posed as the Proud Boys, a far-right group that gained national notoriety at last month’s first presidential debate when Trump, asked to denounce white supremacists, instead told the Proud Boys to “stand down and stand by.”

That is another area where Ratcliffe went off script, the officials said: He omitted any references to the Proud Boys during last week’s briefing, even though the group was named in his prepared remarks.

A senior intelligence official said that Ratcliffe’s remarks were being edited “until mere moments before he went on stage” and that “the broad strokes were shared with agencies who had equities in the press conference to make sure everyone was on the same page.”

Officials at the FBI and CISA referred questions to ODNI. DHS did not immediately respond to a request for comment.

“Literally no one is disputing the 100 percent factual accuracy of the DNI’s remarks,” said Amanda Schoch, the assistant DNI for strategic communications. “The rest of this is just pointless process noise, most of which is inaccurate or taken out of context.”

Schoch noted an Aug. 7 statement by Bill Evanina, the director of the National Counterintelligence and Security Center.

Evanina said the intelligence community had assessed that Iran “seeks to undermine U.S. democratic institutions, President Trump, and to divide the country in advance of the 2020 elections.”

“What the DNI made clear last week is that Iran is executing activities to influence the U.S. election,” Schoch said. “The [intelligence community] has not changed our assessment on Iran’s intent.”

US Cybersecurity and Infrastructure Security Agency gets a meager increase in...

Have we arrived at the “let’s troll high-school classmates” phase of...