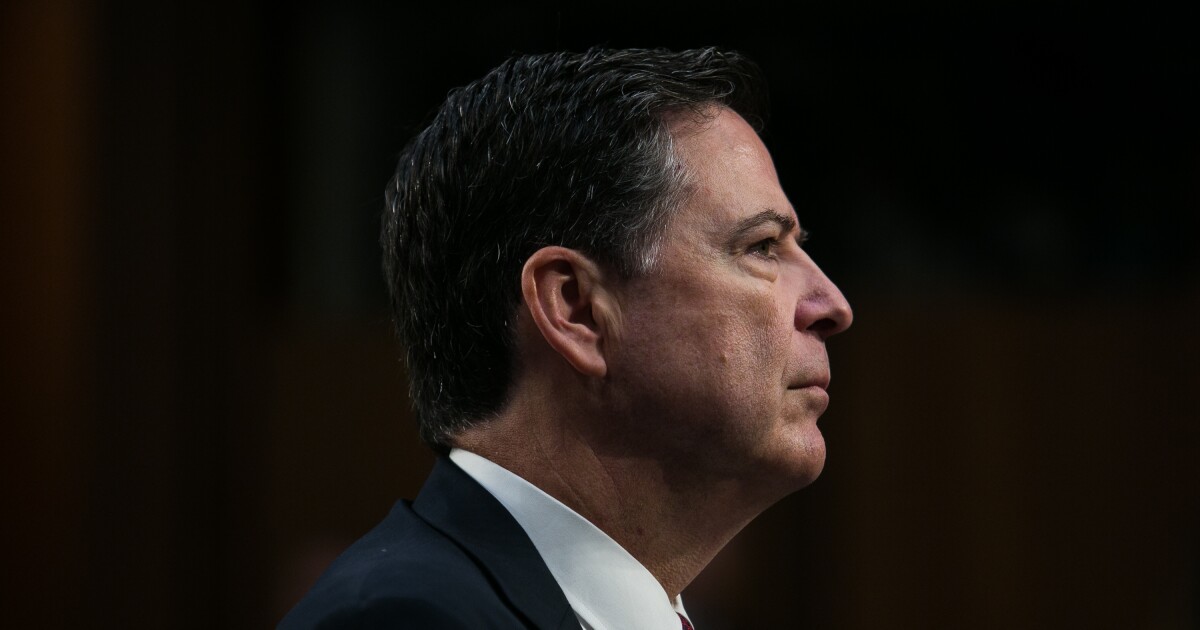 Former FBI Director James Comey said the Justice Department under President-elect Joe Biden’s attorney general should not open a criminal investigation into President Trump when he leaves office in a couple weeks.

Excerpts from the book, Saving Justice: Truth, Transparency, and Trust, were released Wednesday morning, shortly before reports emerged that Merrick Garland, a judge on the U.S. Court of Appeals for the District of Columbia Circuit, will be Biden's pick to lead the Justice Department when he takes office later this month.

It is Comey's second memoir since getting removed from the FBI director role by Trump in May 2017. The leaking of his memos to the press in the wake of his firing helped spur the appointment of Mueller as special counsel to investigate the Trump 2016 campaign's ties to Russia.

Trump is likely to face a number of criminal investigations when he leaves office. Manhattan District Attorney Cyrus Vance has been locked in a lengthy legal battle with Trump that went to the Supreme Court as he seeks a host of financial documents and tax records from Trump as part of its investigation into the Trump Organization and how it handled hush-money payments made to women who said they had sex with Trump. New York Attorney General Letitia James is investigating Trump Organization properties and transactions, and New York County State Supreme Court Judge Arthur Engoron ruled last month that her office should be given access to at least some of the Trump Organization’s information.

MacMillan Publishers touted that Comey’s book “is gracefully written and honestly told, a clarion call for a return to fairness and equity in the law” and claims the fired FBI director “knows better than most just what a force for good the U.S. justice system can be, and how far afield it has strayed during the Trump Presidency.”

Comey is noncommittal on whether Trump should be pardoned by Biden like how President Gerald Ford pardoned Richard Nixon following his resignation in the wake of the Watergate scandal.

“By pardoning a resigned president, Ford had held [Nixon] accountable in a way that Trump would not be, even were he to be pardoned after losing re-election. That might not be enough accountability in Trump’s case. Or it may be, especially if local prosecutors in New York charge Trump for a legacy of financial fraud,” Comey wrote. He also said that the “traditional blindfold on Lady Justice” has been “replaced with a MAGA hat.” Comey added: “Whether or not our next president pardons Donald Trump, and whether or not the Department of Justice pursues him, the American people should be told why.”

Trump tweeted in 2018, in the midst of the Mueller inquiry, that “as has been stated by numerous legal scholars, I have the absolute right to PARDON myself, but why would I do that when I have done nothing wrong?” A Justice Department legal opinion written in 1974 concluded that “under the fundamental rule that no one may be a judge in his own case, the President cannot pardon himself.” Such a pardon would not protect him from state charges.

William Barr, who left his post as attorney general before Christmas and was succeeded by Jeffrey Rosen in an acting capacity, was a harsh critic of the Trump-Russia investigations, but he rejected calls to appoint special counsels to investigate either Hunter Biden or allegations of voter fraud, saying the DOJ had not unearthed widespread fraud that could change the outcome of the presidential race.

Mueller’s special counsel report, released in April 2019, said the Russians interfered in 2016 in a “sweeping and systematic fashion” but “did not establish that members of the Trump campaign conspired or coordinated with the Russian government.”

Comey said that “he was right — I was wrong” when Horowitz’s report came out, showing Comey had pushed to include allegations from Steele’s dossier in the 2017 intelligence community assessment, and the dossier was summarized in a classified appendix to the Russia interference assessment. Comey testified last year that if he knew then what he knows now that he would not have signed off on the FISA applications without a “much fuller” discussion. Horowitz condemned Comey for leaking memos to spark a special counsel.

Biden was asked by NBC’s Lester Holt in late November about the possibility of investigating Trump after he leaves office, and the former vice president suggested he wouldn’t direct his attorney general to do so. “I will not do what this president does and use the Justice Department as my vehicle to insist that something happen,” Biden said. “There are a number of investigations that I’ve read about that are at a state level — there’s nothing at all I can or cannot do about that.”