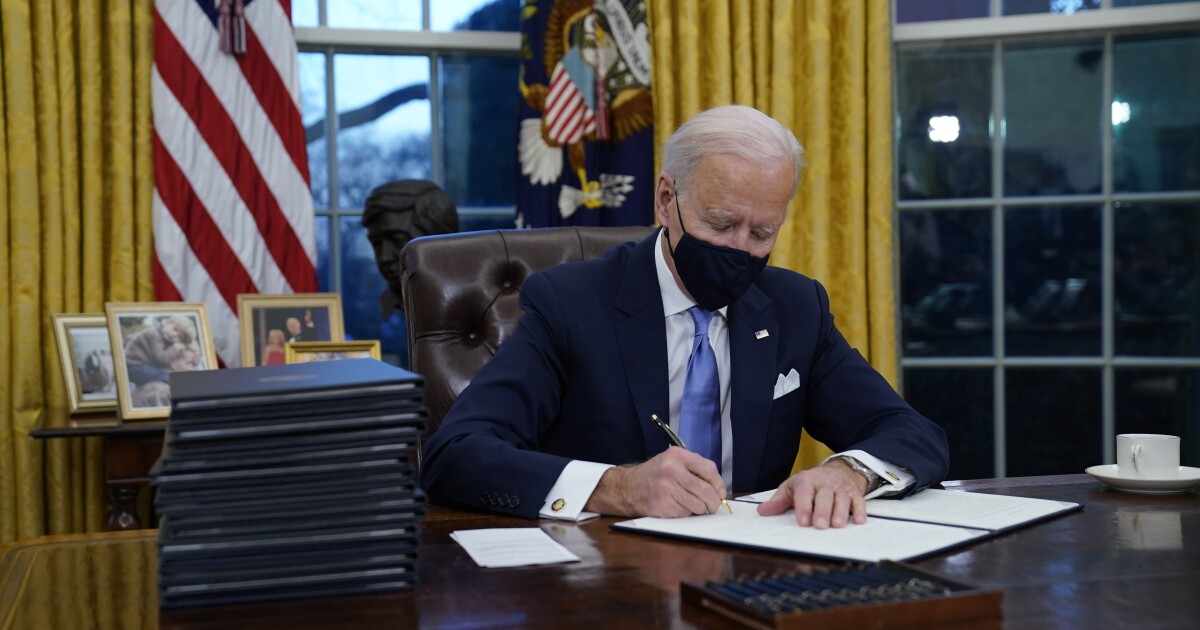 President Biden’s team said he will be instructing his attorney general to review a Trump policy prohibiting the Justice Department from using tens of millions of dollars in bank settlement payments that Republicans criticize as a “slush fund” to leftist groups.

The Biden transition team released this week a “non-exclusive list of agency actions that heads of the relevant agencies will review” in accordance with an executive order on “Protecting Public Health and the Environment and Restoring Science to Tackle the Climate Crisis” signed Wednesday. The Biden team list said the Justice Department, which may soon be led by Judge Merrick Garland, Biden’s attorney general nominee, would be instructed to scrutinize one specific Trump-era rule.

Former Attorney General Jeff Sessions issued a directive in June 2017 titled the “Prohibition on Settlement Payments to Non-Governmental Third Parties.” The policy was made part of the Justice Department’s manual by early 2018, and a final version of the rule was entered into the Federal Register in December 2020.

The Biden executive order appears to be designed to review and possibly change it.

Sessions said settlements “are a useful tool for Department attorneys to achieve the ends of justice” but that “it has come to my attention that certain previous settlement agreements involving the Department included payments to various non-governmental, third-party organizations as a condition of settlement with the United States.” The former attorney general said “these third-party organizations were neither victims nor parties to the lawsuits” and the Justice Department “will no longer engage in this practice.”

The Justice Department reached a multibillion-dollar plea agreement in 2014 with Citigroup and Bank of America for their role in the 2008 global financial crisis. As part of the deal, the banks were instructed to donate tens of millions to housing-related charities and other nonprofit groups, some of which had a left-wing bent, though some of the groups were not victims themselves.

The eligible charities were determined based on a list from the Housing and Urban Development Department. While groups such as Habitat for Humanity and Catholic Charities received money, so did leftist groups such as the National Urban League and the National Council of La Raza. The banks could receive two dollars in credit toward what they owned for every dollar they donated, and the funds ultimately totaled in the hundreds of millions.

“This kind of relief could not have been ordered by a court, even if the government had prevailed at trial,” Deputy Assistant Attorney General Geoffrey Graber told the House Judiciary Committee in 2015.

The U.S. Constitution states that “no money shall be drawn from the Treasury, but in consequence of appropriations made by law.” Critics of the Obama Justice Department set-up said the so-called “slush fund” violated the separation of powers, and a reversal by Biden could reopen an Obama-era battle between Republicans and Democrats in Congress.

During a Republican-led Financial Services Committee hearing in 2016, Georgetown law professor Nicholas Quinn Rosenkranz testified that “these settlement provisions do not violate the literal terms of the Appropriations Clause, but they clearly circumvent its text and subvert its function.” Paul Larkin, a senior legal research fellow at the Heritage Foundation, contended “that clearly is the sort of sham transaction that the Justice Department would prosecute as fraud if private parties engaged in this.”

Then-House Judiciary Chairman Bob Goodlatte, a former Republican congressman from Virginia, introduced the “Stop Settlement Slush Funds Act of 2016.” His committee held hearings in February and May 2015 in which they grilled Obama DOJ officials on the issue and sent letters to the Justice Department pushing for details.

A report from the GOP-led House committee found in 2016 that “the DOJ is pushing and even requiring settling defendants to donate money to non-victim third-parties” and “DOJ has funneled third-party groups as much as $880 million dollars in just the last 2 years.” The report lamented “these payments occur entirely outside of the Congressional appropriations and grant oversight process.”

Democrats released a dissenting report, arguing that Goodlatte’s proposed bill would “undermine the ability of agencies to hold unlawful conduct accountable and provide complete restitution for violations of the law, or tailor remedies to address systemic or diffuse harms to unidentifiable victims, the public health, or the environment.”

Goodlatte announced he had unearthed a “smoking gun” in Justice Department documents he obtained in October 2017.

Those records show a deputy for former Associate Attorney General Tony West, currently the chief legal officer at Uber, appearing to insert himself into the settlement discussions.

“Can you explain to Tony the best way to allocate some money to an organization of our choosing?” one 2013 email from the deputy said.

A redacted senior official also sent an email in 2014 saying a donation provision had been revised with the goal of “not allowing Citi to pick a statewide intermediary like the Pacific Legal Foundation,” which “does conservative property-rights free legal services.”

“We have found that the Department of Justice was systematically subverting Congress’s spending power by requiring settling parties to donate money to activist groups,” Goodlatte said in 2017. “The practice is wrong no matter which party is in power. Attorney General Session’s integrity stands in stark contrast to the behavior of Obama Administration officials who used their position to funnel billions of settlement dollars to their political allies.”

WHO hasn’t ruled out lab leak and Washington Post calls for...