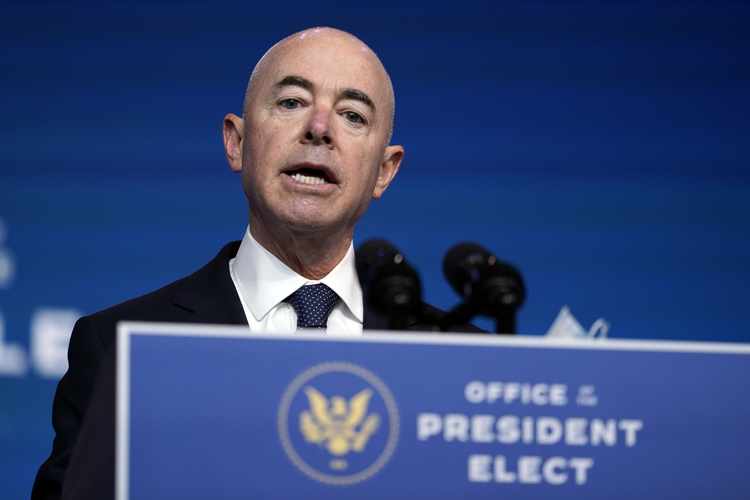 A sprawling series of barbed-wire barricades surround the U.S. Capitol, and so many members of the National Guard are camped out inside they’re sleeping on floors.

While bracing for the possibility of more violence in Washington and beyond, Democrats are urging swift confirmation of President-elect Joe Biden’s national security team.

There’s one obvious problem, however: Before the storming of the Capitol that left five dead and a nation aghast and on edge, Alejandro Mayorkas, Biden’s choice to lead the Department of Homeland Security, was facing one of the toughest confirmation fights of any Biden nominee. And concerns about him among Republicans have not dissipated along with the tear gas.

Democrats want to fast-track both confirmations, stressing the need to fill a leadership vacuum at key national security agencies. Former acting DHS Secretary Chad Wolf was one of several Trump administration officials who resigned in the wake of the Jan. 6 riot on Capitol Hill by Trump supporters. Pete Gaynor, the former administrator of the Federal Emergency Management Agency and a Trump appointee who is well-liked across the aisle, is now in charge at DHS, but Biden is eager to have his own team in place.

With the nation still coming to grips with the violence inside the Capitol and the GOP divided over Trump’s subsequent impeachment, it’s unclear whether Senate Republicans have the stomach to battle controversial Cabinet nominations.

It won’t take long to find out. Sens. Gary Peters, a Michigan Democrat who will chair the Homeland Security and Government Affairs Committee in the new Congress, along with Sen. Rob Portman, an Ohio Republican who will serve as the panel’s ranking member, set Mayorkas’ confirmation hearing for Tuesday, one day before Biden’s inauguration.

“We need to move quickly to get the right people in these agencies, and to make sure we’re keeping this country safe, and that we’re ready for whatever threats might come,” Klain said during a Washington Post interview Friday that was live-streamed.

Mayorkas’ track records indicates that he has both the pedigree and the desire to lead a reversal of Trump’s immigration policies, which Biden has promised. A Cuban-born naturalized citizen, Mayorkas knows the agency well, having served as deputy DHS secretary and the director of U.S. Citizenship and Immigration Services during the Obama administration.

In that post, he developed the Deferred Action for Childhood Arrivals program, or DACA, which protected immigrants brought to the U.S. illegally as children from being deported and allowed them to work legally.

“We must bring to an immediate end the inhuman and unjust treatment of immigrants,” Mayorkas said in recent remarks to the American Business Immigration Coalition. “There is no more powerful and heartbreaking example of that inhumanity than the separation of children from their parents.”

Mayorkas’ background seems perfectly aligned with Biden’s promise of a major immigration reset, but his previous tenure at DHS is both a blessing and a curse.

In 2013, every Republican, including several centrists who have regularly broken with Trump, voted against Mayorkas’ nomination to be deputy DHS secretary. Those Republicans include Sens. Lisa Murkowski of Alaska, Susan Collins of Maine, and Portman, who will serve as the top Republican on the Homeland Security panel.

Among the entities that received special treatment to obtain the visas, according to the IG report, were investors in a hotel and casino project in Las Vegas being pushed by Reid, and an investor proposal to fund electric car manufacturing, which involved a company whose board chairman was McAuliffe. The IG investigation also implicated Anthony Rodham, Hillary Clinton’s brother, because he ran an investment firm that directed funds to the electric car manufacturing effort.

Mayorkas was only able to win confirmation to the DHS post in 2013 because a month earlier Reid changed Senate rules to allow a simple majority to end debate on nominations, not the 60-vote threshold confirmations previously had to overcome.

The final IG investigation into the allegations found that Mayorkas created an appearance of favoritism and special access at the UCIS when he was director there from 2009 to 2013, and it noted that investigators were surprised by the number of whistleblowers who came forward to complain about him. In addition, officials and staff also cited his unprofessional management style.

“During the course of our review, we found that a number of staff members described Mr. Mayorkas’ communication and management style as very aggressive. … One staff member said Mr. Mayorkas was ‘full of emotion, impulsive, volatile, and tenacious,’” the IG report stated. “Another high-ranking USCIS official told us that employees were afraid to speak up in the meetings because if they had a different view, Mr. Mayorkas would ‘cut them up, take them apart, or put them in their place.’”

A source familiar with the complaints told RealClearPolitics that several officials at DHS were stunned by Biden’s decision to nominate Mayorkas considering the IG’s findings and also because he was known for yelling at staff and berating those who disagreed with him. This source also voiced concern that some whistleblowers who filed complaints against Mayorkas remain at DHS and could face retribution from him.

“For years, including during Mr. Mayorkas’ tenure at DHS, the EB-5 program was susceptible to fraud and abuse. But rather than fixing those issues, the IG found that Mr. Mayorkas gave preferential treatment to some visa applicants over others,” Grassley told RCP in a statement. “The IG noted that this favoritism prompted an unusually broad array of whistleblower complaints.

“That brand of leadership isn’t good for agency culture or the security of our nation.”

Other Republicans have been even harsher. In November, Arkansas Sen. Tom Cotton accused Mayorkas of “selling green cards to Chinese nationals on behalf of rich Democratic donors.”

“Think about that,” Cotton said on “Fox & Friends.” “… That is disqualifying to lead the Department of Homeland Security.”

The visa scandal isn’t the only baggage in Mayorkas’ background that Republicans are expected to bring up during Tuesday’s hearing. The nominee, along with California Attorney General Xavier Becerra, Biden’s choice for Health and Human Services secretary, were key figures in a scandal involving President Bill Clinton’s early release of a convicted cocaine trafficker in 2001.

Becerra and Mayorkas were among several prominent Democratic figures in Los Angeles at the time who reached out to the Clinton White House about commuting the sentence of Carlos Vignali Jr., whose father, Horatio, was a wealthy entrepreneur and major Democratic door.

Vignali Jr. was convicted in 1994 of involvement in a drug ring that shipped hundreds of pounds of cocaine from Los Angeles to Minnesota, where it was converted to crack and sold on the streets. Media reports at the time characterized the prosecution as the largest drug case in Minnesota state history.

Clinton commuted Vignali’s sentence on his last day in office. The move drew intense scrutiny and prompted a 2002 investigation by the GOP-led House Committee on Oversight and Reform because the commutation was provided over objections from the Justice Department’s pardon office, and Vignali was freed while several of his black co-defendants remained in jail.

A group of well-connected Democrats had close ties to Vignali’s father, including Becerra, then a U.S. congressman, and Mayorkas, then the U.S. attorney in Los Angeles. Vignali’s father also paid $200,000 to Hillary Clinton’s other brother, Hugh Rodham, to help obtain Vignali’s release. The Clintons said they didn’t realize Hugh Rodham had been paid for his role until press reports uncovered it; they then called on him to return the money.

Mayorkas reiterated that regret during sworn testimony before the Senate in 2009 when he was nominated by Obama to lead UCIS. At the time, Mayorkas overcame his role in the scandal to be confirmed in a unanimous vote, but that was before the IG’s findings in the EB-5 scandal.