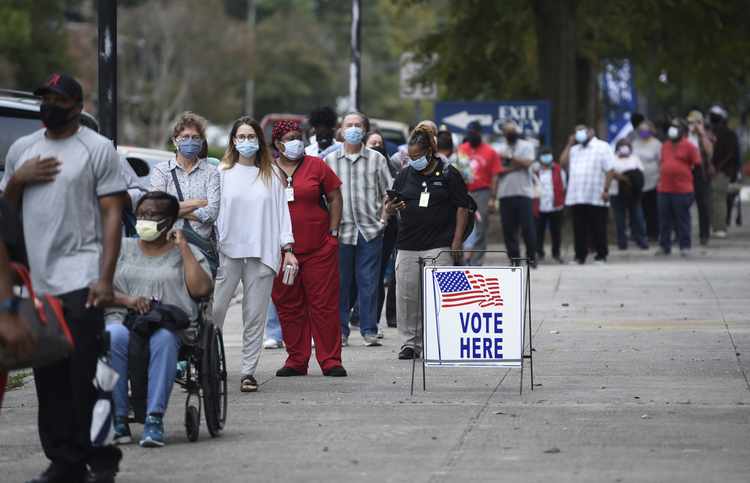 In the classic movie “The Godfather,” Michael Corleone travels to a small restaurant in the Bronx to meet with a rival Mafia boss. At the table the boss tells a corrupt policeman who is there to serve as a third-party witness that he is going to “speak to Michael in Italian.” In the movie they switch languages to keep the policeman in the dark.

So I’m going to speak “Georgian,” not to keep anyone out, but to hopefully add context to two situations that the media has been conflating.

First the recount. Despite assertions by Secretary of State Brad Raffensperger and in the local media, the effort has been disingenuous. There was a failure to properly authenticate ballots. Finding thousands of uncounted ballots in the process doesn’t help create confidence in what Georgia officials claim to be a smooth process.

In addition, post-election data shows that some 15,000 individuals who no longer live in Georgia voted in the recent general election. Another 8,800 inactive voters mysteriously cast a vote in this cycle. Some 14,000 “low propensity” voters who basically have not voted in 10 years also participated. Almost all of those votes were cast before the November 3 same-day voting.

None of this suspicious activity could change the course of a recount in which not enough monitors were provided. And in many of the larger counties, monitors were forced to observe from a distance where they could not see the ballots. Signature verification was not even considered. But those lists of non-resident, inactive, and other so-called “miracle” voters could have their status challenged for the upcoming runoff, if done so quickly. That is not voter “suppression.” It’s enforcing the basic integrity of the election process.

A recent InsiderAdvantage poll showed that only half of Georgia voters believe the results of the November election were fair and accurate. Among Republicans, this figure was more than 70%. So that’s the landscape as we enter the runoff stage in an election that will determine control of the U.S. Senate.

Will the dog hunt?

This suggests to me that both Republican incumbents are slight underdogs. I come to this conclusion not just as a pollster who usually gets Georgia right, but who served as a state representative, a GOP nominee for lieutenant governor, and as the political analyst for three of the four Atlanta network affiliates.

And this is where I start speaking “Georgian.” When I served in the legislature, our legendary House Speaker Tom Murphy used to say, as the legislative session was in its last days, that we were “down to the lick log,” (a farming term) meaning time was up. The Republican candidates in these Senate races are down to that “lick log.” Advanced in-person voting starts in less than a month and absentee ballots start being mailed this week.

And while Democratic activist and former state Rep. Stacey Abrams tweeted on Sunday that more than 600,000 voters already had requested mail ballots, Georgia Republicans are busy fighting with each other. They must find a way to appeal to two, very disparate, branches of their party. One dominates the suburbs – not just in Atlanta, but also outside Athens, Savannah, Columbus, and Sea Island. This is the establishment wing of the GOP. The other is the massive Donald Trump GOP that dominates rural towns and counties from the mountains of North Georgia to the Florida line. With the silence of the Republican Gov. Brian Kemp over the voting issues in Georgia, both rank-in-file Republicans and many state leaders are fighting each other. This is a house divided that must come together quickly — and may not.

Resentment toward Kemp among Trump supporters, who are still reeling from an election result they mistrust, could make turnout for Perdue and Loeffler problematic. Kemp has been asked to call a special legislative session to clean up Georgia’s chaotic absentee ballot laws but refuses to do so. In our latest InsiderAdvantage survey of Georgia, Kemp’s approval rating had plummeted to 37%, with Republicans divided over him.

The early campaign messages in the two races may further complicate matters.

Loeffler advocates have gone to the airwaves linking her opponent, the Rev. Warnock, to support of controversial positions and political figures. One of those ads has images of him dressed in more traditional African dashiki-style garments while preaching in a church. Perhaps that might persuade a few suburban white voters, but those images could also inflame Georgia’s very powerful African American demographic. Whether it is this particular ad, or something else, you can bet that Loeffler will be accused of racism. It’s a time-honored tradition in Georgia politics and trust me, it’s coming.

As a percentage of the vote, African Americans made up less of the general election turnout in November than in recent presidential contests. That should actually concern Republicans. Why? Because in the runoff Georgians could make history by electing a black pastor to the U.S. Senate from a state in the Deep South. I expect African American participation to increase: certainly, Democrats are trying to pump it up, as powerful figures such as Barack Obama have come to Georgia to point to this unique moment.

In Perdue’s instance, it appears that the well-worn “he’s too liberal” TV ad (which rarely resonates with voters in Georgia) has been substituted with a “he’s too radical” version. Perdue’s opponent, Jon Ossoff, has carefully cultivated image of a “progressive moderate.” Throwing the “R word” around might not do enough to damage the Democratic nominee. Just ask Craig Keshishian, the last living pollster for Ronald Reagan. Keshishian flatly declares, in a California version of our Georgia lingo, “That dog won’t hunt.”

And running Sen. Chuck Schumer in attack ads won’t work either because most Georgia voters have only a vague concept of who he is or what he does.

To recover their momentum, Republicans have to find a way to do three things:

First, the messaging to Atlanta suburban white voters must be specific as to how a victory for the Democratic nominees will impact them in a very personal way. That means ads showing solar panels being forced on their homes and social workers substituting for police. Calculating the cost of their soon-to-be new tax increases in their city or county, courtesy of lost revenues due to COVID, might make these voters think twice about casting a vote that is likely to add to their federal tax burden. Unless they see tangible challenges to their lifestyle or pocketbooks, suburban voters will likely continue their drift to a party they view as moderate — or perhaps even liberal — but not socialist.

Secondly, the Trump base must be reengaged. Make no mistake, a huge portion of these voters couldn’t care less about the two U.S. senators. Their devotion is to Donald J. Trump, and only Trump can deliver them back to the polls. In Georgia, Trump is not a political figure among most Republicans; he’s closer to a religion.

Finally, let’s return to that discussion of the recount. How about those many voters who have moved out of Georgia or who have not voted in ages but somehow managed to send an absentee ballot this go-around? These votes, however they were obtained, represent the slim margin which make the two Republicans sight underdogs in my book. There is a short window in which, under Georgia law, their status can be challenged by appealing to their local county election board.

For the two Republican incumbents, and for the balance of power in the Senate, we are truly at “the lick log.”

Matt Towery is an attorney, a former Georgia state legislator, and the co-founder and chairman of InsiderAdvantage Georgia. He has polled presidential and statewide races across the nation for 20 years.