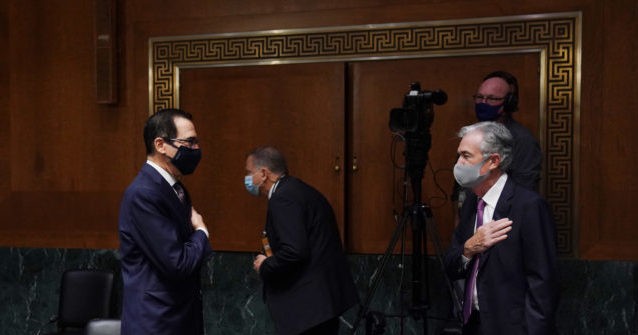 Despite a record-high federal budget deficit and unprecedented levels of liquidity provided by the Federal Reserve, inflation is dead.

U.S. consumer prices were unchanged in October, the lowest reading in five months, suggesting that a price spike over the summer is beginning to fade as coronavirus cases spread.

The flat reading for last month followed a gain of 0.2 percent in September. Core inflation, which excludes volatile food and energy costs, also showed no changed in October, another indication that inflation remains well-behaved, the Labor Department reported Thursday.

The extremely low level of inflation presents a challenge to proponents of mainstream monetary theory, which predicts that a rise in the supply of money would push prices higher. It suggests that the Fed can keep its interest rate target at the current zero to one-quarter of a percent range without sparking inflation.

Perhaps more controversially, the lack of any inflationary pressure suggests that the federal government could afford additional fiscal expansion even beyond what it has already provided to stave off an economic collapse due to the pandemic. Taxes could be cut by more, driving up the deficit and leaving more money for the private sector to spend.

Unfortunately, Joe Biden has promised that he will raise taxes if he becomes president and House Democrats would be unlikely to agree to further tax cuts in a second Trump term. Additional spending could provide economic stimulus but Republicans would likely reject bills that aim government dollars at projects favored by Democratic lawmakers and the special interests that back them.

So fiscal expansion seems unlikely. That means inflation is likely to stay dead — or go undead. Deflation would create a huge problem for the Federal Reserve’s credibility because the central bank says it is currently aiming to bring inflation above its two percent target.

A side note: all the China and metal tariffs are still in place. Mainstream media and mainstream economists insisted these would raise consumer prices. Those price hikes never came about. And even now, with global supply chains in chaos due to pandemic disruptions, consumer prices are not rising and tariff costs are not being passed on to U.S. households.

Over the past 12 months, overall inflation is up a limp 1.2 percent while core inflation is up 1.6 percent. Both readings are well below the Federal Reserve’s 2 percent target for annual price gains.

Economists believe the consumer price index for October shows that inflation was well contained and would allow the central bank to keep interest rates low for a considerable period.

Kathy Bosjancic, chief U.S. financial economist at Oxford Economics, said that the “benign inflation readings support our call that the Fed will not lift-off” its current ultra-low rates until the middle of 2024.

At its meeting last week, the Fed left its key policy rate at a record low of zero to 0.25 percent and repeated its new policy guidance that it will keep rates low to allow inflation to rise above its 2 percent target for a time in order to drive unemployment lower.

The CPI report showed that used car prices, which had been surging, retreated slightly in October, dropping 0.1 percent after a 6.7 percent jump in September which had been the largest one-month gain in 51 years.

Energy prices edged up a slight 0.1 percent in October as gasoline prices fell by 0.5 percent. That puts pump prices 18 percent below where they were a year ago.

Food costs edged up 0.2 percent in October and are 3.9 percent higher than a year ago. Prices of dairy and related products fell 0.9 percent in October, the biggest drop since January 2015. Four of the six major grocery store groups saw price gains in October with meat, poultry, fish and eggs all increasing.

The Associated Press contributed to this report.