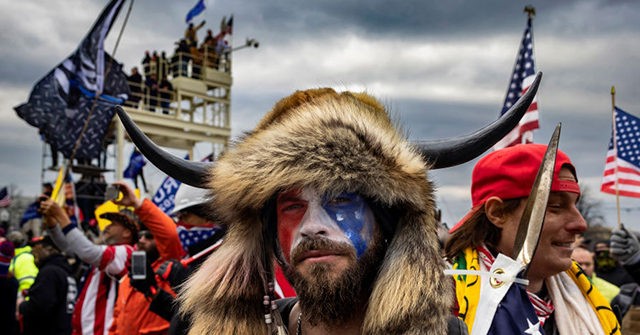 An essay published in the Nation on Friday warns of the convergence of New Age trends with right-wing extremist political conspiracies and how the “real threat” emanates not from those who breached the Capitol in January but from “self-serious Republicans” like House Minority Leader Kevin McCarthy and those “who aren’t easily denounced as extremists.”

The essay, penned by Toronto-based writer John Semley and titled “Could One of Your Facebook Friends Be the Next QAnon Shaman?” bears the subheadline, “Seemingly benign online communities have become breeding grounds for the kind of far-right ideology on display at the US Capitol insurrection.”

Describing Jacob Chansley, dubbed “the QAnon Shaman,” as having “[stolen] the show” during the January 6 riots in Washington, D.C., Semley claims Chansley stands as “a symbol for the various transgressions of Trumpism” while also having become “a handy way of laughing off violent domestic terrorists as little more than a disorganized gaggle of, well, wackos and losers.”

Semley then alerts readers to the likely presence of such figures among their own peers.

“You may find examples of this within your own social circles, as I have mine: health-conscious vegan friends becoming hard-line anti-vaxxers after subscribing to multilevel marketing schemes; coworkers moving from posting ‘daily spiritual inspirations’ memes on Facebook to sharing misinformation about an alleged child-trafficking scheme perpetrated by Wayfair; ad hoc shamanic cults in northern Ontario centered on the ceremonial use of DMT, an extremely potent psychedelic,” he writes.

Accusing these individuals of “creating a whole ecosystem of disinformation,” Semley claims that the blending of their “ideologies and impulses” represents the ways in which “various New Age and esoteric belief systems are increasingly finding common ground in far-right extremism.”

Semley also warns of the “big tent” appeal of such messaging.

“That a disorganized group of wing nuts, terrorists, and true believers joined forces, and marched up the Capitol steps and into the Senate chamber, many rallying under the QAnon banner, speaks to its ‘big tent’ appeal,” he writes. “Crucially, this more diffused, networked form of belonging also provides the cover of plausible deniability.”

“Now you can propagate racist and anti-Semitic talking points without having to be a card-carrying Klansman,” he adds.

Semley also cautions that “writing off Chansley as a loony or cosplaying crank risks underestimating the graver threat of nationalist, nativist, xenophobic movements that gained traction under Trump.”

Semley then quotes misinformation researcher Whitney Phillips who finds the likes of Chansley to be less threatening than “Republicans like Kevin McCarthy.”

“We can talk about QAnon until we’re blue in the face,” she says. “But the real concern is that elected officials — on record, publicly — are not repudiating the underlying narrative that animates QAnon.”

“It’s the people who aren’t easily denounced as extremists,” she adds, “who pose the greatest risk of perpetuating extremism.”

Though it is “tempting to view the insurrection as some dramatic, bloody climax of the Trump era,” Semley claims researchers “who study cultish thinking” assert that it may only be the beginning.

Semley concludes by expressing his concerns over “the forces of weirdness” blending into society.

“The horned headdresses and ceremonial prop spears will be hung up, swapped for suits and ties and the trappings of ostensible legitimacy,” he writes.

“We may begin to feel sentimental, even nostalgic, for the baldfaced bizarreness of QAnon and its public-facing priests; for the time when the forces of weirdness and malice were still so unsophisticated as to announce themselves as such.”

The piece comes as some Democrats and the liberal media continue to target conservatives and paint Trump supporters as domestic threats, despite earlier calls for “healing” and “unity.”

Last month, the Los Angeles Times published an op-ed addressing the struggle to “resist demands for unity” in the face of acts of “aggressive niceness” on the part of friendly Trump supporters who are compared to terror organizations who “offer protection and hospitality” and “polite” Nazis.

In a recent video created by left-wing novelist Don Winslow, citizens are called upon to become cyber detectives to monitor and report fellow citizen Trump supporters to authorities while comparing the work of this “army of citizens” to that which led to the capture of al-Qaeda founder Osama bin Laden.

In January, House Speaker Nancy Pelosi (D-CA) dubbed members of Congress who seek to protect themselves with firearms the “enemy.”

“We will probably need a supplemental for more security for members when the enemy is within the House of Representatives, in addition to what is happening outside,” she said.