Anarchists attracted significant media attention nationally over their roles in the riots, looting and arson that erupted following the death of George Floyd in May. While many black activists view President-elect Joe Biden’s victory in the 2020 election as an opportunity for social justice reforms, anarchists essentially view Biden and President Donald Trump as bedfellows defending a capitalist economy they seek to dismantle, the LA Times reported.

Black community leaders and activists have said that the anarchists’ actions, like setting a building that houses a police station and black-owned businesses in Portland on fire, weren’t helping black Americans.

“When I hear about somebody burning something down, I think about that as an act that’s always been used against black people,” Ron Herndon, a longtime black activist, said at a news conference the morning after police used tear gas to disperse protesters firing paintballs, the LA Times reported. “You are not helping us.”

Rachelle Dixon, the head of Portland’s Black Lives Matter chapter, told a reporter that the anarchists had nothing to do with the social justice movement but the public appeared to believe they did.

“[Anarchists have] melded with Black Lives Matter, but they’re 90% white and they don’t reach out to black organizations,” she said.

“I didn’t destroy my own building,” she added.

Biden has also condemned the violence, saying that “arsonists and anarchists” should face legal prosecution in July, and that peaceful protesters “should be protected.”

The destruction in Portland has continued since May, and most recently, Around 150 instigators participated in a march called “Capitalism is Scary,” according to The Oregonian. Rioters destroyed the windows of ten separate businesses, including multiple phone stores, a coffee shop, a computer storefront, a hotel, a bank, a pair of realty offices and a restaurant with patrons inside, a report from the Portland Police Bureau (PPB) revealed.

“With the BLM protests there were clear demands, but it’s very difficult to see an end to something when it’s not clear what the demands are,” Shirley Jackson, a Portland State University professor of black studies, told the LA Times.(RELATED: Anti-Capitalist Rioters Smash Windows Of Ten Businesses During Violent Portland March)

Several black community leaders who participated in protests in the summer said that it was crucial to rebuke the violence the anarchists were causing, and to dissociate Black Lives Matter from the anarchists.

“Clearly it’s not black folks going to Commissioner Ryan’s house and busting out his windows,” Rukaiyah Adams, chief investment officer for Meyer Memorial Trust, said. The foundation is currently funding a $25 million racial justice initiative, according to the LA Times. 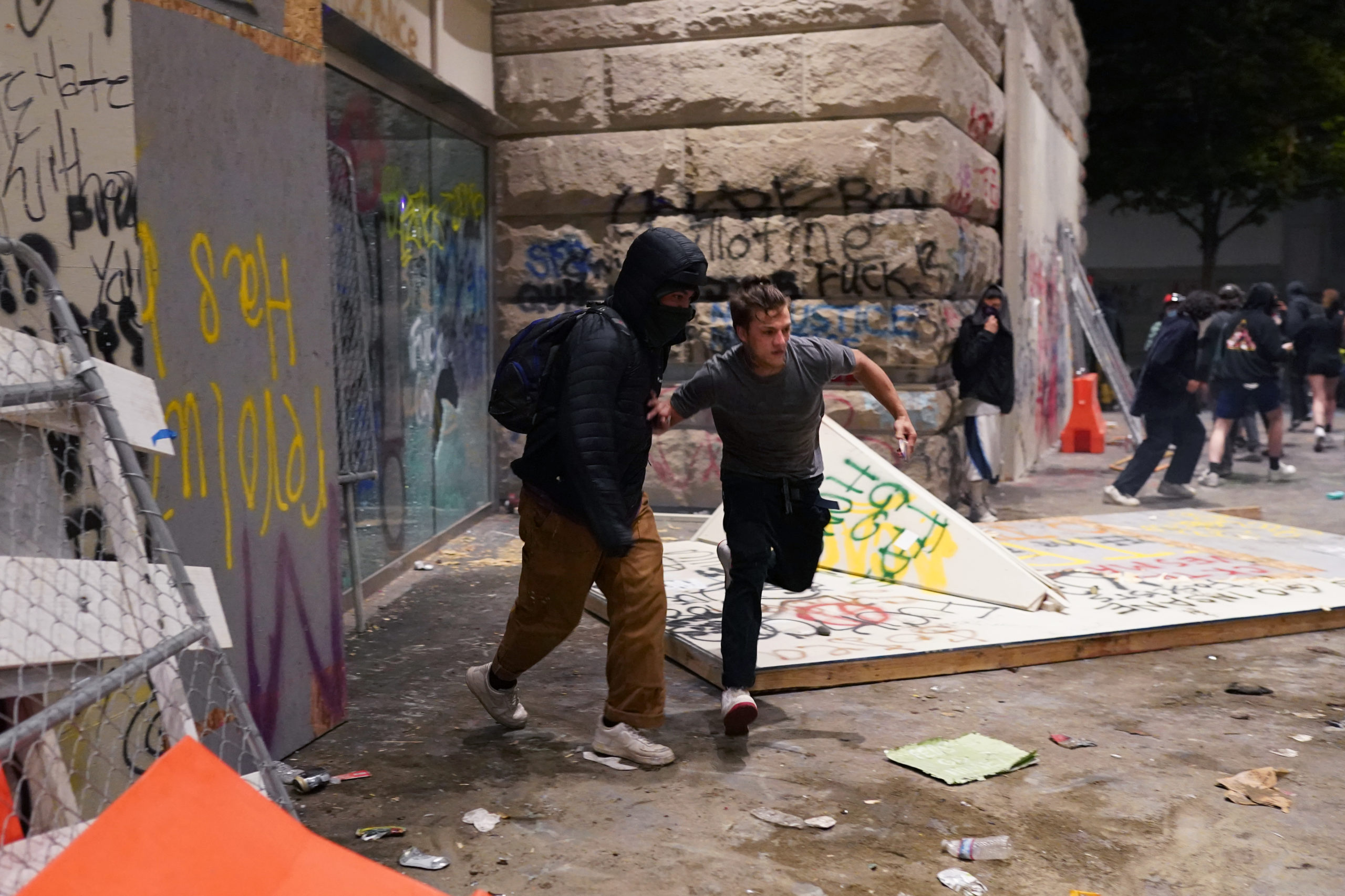 During the week of the election, a riot was declared and several were arrested after windows were smashed in downtown Portland following a peaceful gathering and march on election night, according to KTVZ. One individual was reportedly seen spray-painting an anti-Biden epithet on a wall, an anarchist symbol, and “ACAB,” which means “all cops are bastards,” while six others shattered windows.

“I don’t think those windows were smashed because they were thinking about my life and the lives of my children,” Oregon Executive Director of Stand for Children Toya Fick said, according to the LA Times. The organization is a nonprofit that advocates for equal opportunity in education.

The anarchists, who often associate themselves with antifa, had partaken in the destruction to cities across the country. More than 250 buildings were looted and damaged in St. Paul and Minneapolis during the Floyd protests and riots. In Dallas, Texas, numerous businesses were vandalized and looted, with some rioters slashing tires and breaking windows on police vehicles. Los Angeles saw a wave of looting, burglary, robbery, vandalism and arson during the protests.

By June 4, more than 50 cities in 23 states had imposed curfews, and the National Guard was called in to at least 30 states and Washington D.C., according to ABC News.