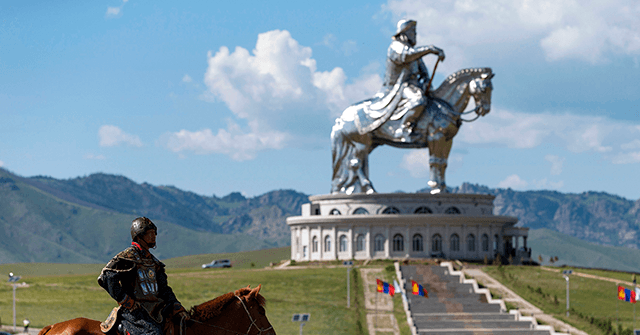 The Chinese Communist Party (CCP) is attempting to erase the Mongol emperor Genghis Khan from Chinese history according to a report this weekend by human rights magazine Bitter Winter.

Genghis Khan founded the Mongolian Empire in 1206. It was the largest contiguous land empire in world history at its peak, spanning roughly nine million square miles of territory from the Pacific Ocean in the east to the Danube River in the west. During Genghis Khan’s reign, the Mongolian Empire posed a serious challenge to China’s powerful Jin dynasty.

“During the past month, fourteen stone tablets summarizing the life story of Genghis Khan and his achievements were painted over or destroyed in Genghis Khan Square in the Hailar district of Hulun Buir prefecture-level city, in Inner Mongolia. Protests of the local population were ignored,” Bitter Winter revealed on November 7.

The museum’s director, Bertrand Guillet, said in a statement that the Chinese government also requested “control over all our productions, texts, maps, the catalog, [and] press releases.”

“The proposed new synopsis, written by the Beijing heritage office, applied as a censorship to the initial project, includes elements of biased rewriting aimed at making Mongolian history and culture completely disappear for the benefit of a new national story,” Guillet said.

The museum director added that Beijing’s attempt to censor the exhibit was part of a greater “hardening of the Chinese government’s stance against the Mongolian minority this summer.”

Guillet referred to the CCP’s crackdown this past summer on expressions of Mongolian language and culture in public schools. A CCP mandate in August “ordered an end to Mongolian-language classes for first-year primary students and an end to Mongolian-medium teaching and materials in favor of the Chinese language” in China’s Inner Mongolia Autonomous Region. The directive was met by protests by Mongolians across the region.

The CCP’s alleged efforts to eliminate key aspects of Mongolian culture and history are part of an overall party agenda to neutralize perceived threats to Han Chinese domination countrywide; the Communist party pushes this “sinicization” as a way to consolidate its power. The CCP forces the ruling ethnic Han Chinese culture onto minority cultures in its regions of Mongolia, Xinjiang, and Tibet, in many cases assimilating native minorities against their will.