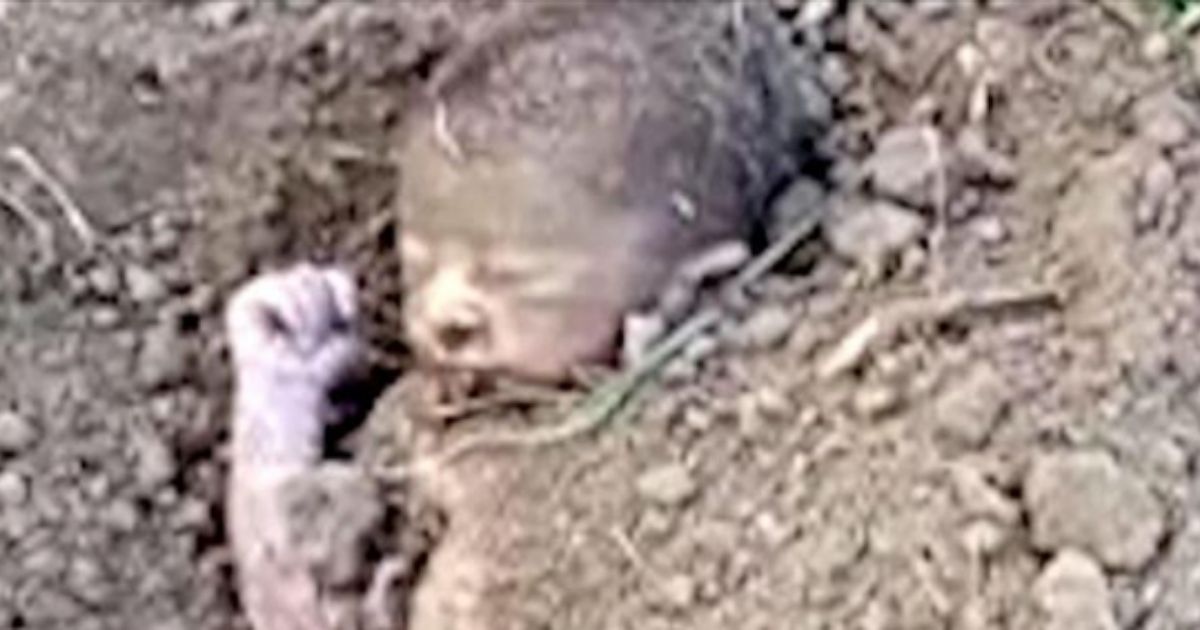 On Wednesday morning, a worker was crossing a field in Khatima, India, when he noticed something startling peeking through the surface of the ground.

It appeared that someone had partially buried the infant in a shallow hole and abandoned it.

The worker, Kundan Singh Bhandari, immediately notified nearby villagers and a crowd quickly formed, according to an Indian news source.

Video of the scene shows the dusty baby, motionless, as a woman pats under its nose with the colorful scarf it has been wrapped in.

While the baby doesn’t appear to respond much, reports said that the baby was breathing, and so authorities were called.

Police officers Manoj Kumar Thakur and Kotwal Sanjay Pathak responded, and the baby was taken to a nearby hospital, where its condition was said to improve.

The field where the baby was found is near the border of Nepal, and an investigation will be conducted to try to find out more about the situation surrounding its apparent abandonment.

Very little information was available about the child other than that it was buried but was still breathing by the time the villagers rescued it.

Sadly, this isn’t the first story of a child being abandoned, buried and left for dead.

Last June, the story of a newborn baby girl who’d been abandoned in a dump in Rajasthan, India, went viral. She was only 3.5 pounds and in critical condition.

RELATED: Country Star Carly Pearce Reveals She Had Accident That Left Her ‘Mangled’ Weeks Before CMA’s

Her story caught the attention of a journalist couple through Twitter, and they set out to track her down and adopt her. They named her “Pihu.”

Last October, a couple in Bareilly, India, who was grieving the loss of their own newborn daughter discovered a very much alive baby girl when they went to bury their departed child.

Someone had put the 3-pound infant in a clay pot and then buried it three feet underground.

If those parents hadn’t been in the right place at the right time, the baby likely would have died in its cruel tomb.

The baby was whisked to a hospital where it received treatment. Authorities suspected it was a case of attempted infanticide, and according to Times of India, they were checking surveillance footage to look for suspects.

It’s a sad reality that many babies, and especially baby girls, are abandoned in places where male children are preferred despite the act being illegal.

Thankfully for these three babies, people were in the right place at the right time and were able to save them from becoming part of a sad statistic.