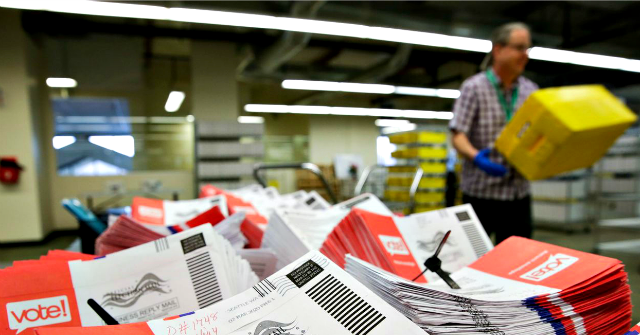 Government Accountability Insititute (GAI) research director Eric Eggers, author of Fraud: How the Left Plans to Steal the Next Election, says Michigan and Pennsylvania, with their “weird anomalies” this election, are raising “tough questions” about potential voter fraud.

In an exclusive interview with SiriusXM Patriot’s Breitbart News Daily host Alex Marlow, Eggers said American voters are raising concerns because states such as Michigan and Pennsylvania — where President Trump’s campaign has alleged fraud in the presidential election — have histories of voter fraud.

“Breitbart has been a leader in identifying possible vulnerabilities …. some of those vulnerabilities have not done any favors in terms of making people feel more confident about the integrity of the election that just occurred, right?” Eggers said:

“When you have states like Michigan and Pennsylvania, that you see these weird anomalies in terms of the pattern of votes coming in,” Eggers continued. “Same thing happened in Wisconsin, and the states like that, where you have documented history, problems dealing with the influx of mail-in balloting and documented history of voter fraud occurring in those systems. Those are the reasons why people are asking tough questions.”

Eggers noted that while the establishment media is rushing to declare Democrat Joe Biden and Sen. Kamala Harris (D-CA) the winners of the election, contested elections in recent history have shown that such legal disputes can last for weeks and months.

“Al Gore gave his concession speech on December 13. Right, think about that. December 13, that’s like six weeks after the election,” Eggers said of the 2000 presidential election. “That wasn’t everyone just standing around. It was ‘We got lots of court battles. We’ve got lots of different things happening.’”

“I think we deserve to have hard questions asked about problems that people identified ahead of time about the election,” Egger said. “But it’s interesting that it doesn’t seem like the media’s gonna give us space to have those conversations.”

Eggers said GAI is in the process of analyzing where Americans should be looking in terms of trying to identify fraud and vulnerabilities in the election system. Some issues have already been alleged by the Trump campaign, which claims that at least 3,000 votes in Nevada have been improperly counted.

Eggers mentioned numerous documented cases where voter fraud has been alleged or pointed out in Pennsylvania and Michigan.

“The top election official in Pennsylvania four years ago resigned quietly after the election —  and then subsequent emails obtained by the Pittsburgh Post-Gazette showed that Pedro Cortez was actually fired by the governor because he presided over a system that allowed for what he called ‘a glitch’ that allowed illegal votes,” Eggers said. He went on to say:

Philadelphia had an election judge arrested this year for stuffing ballot boxes because they’re paid by political operatives. In Michigan, they proactively sent everybody absentee ballot request forms, and you’ve got document issues with more registered voters than legal voters in certain key areas. Detroit had election officials charged with voter fraud before.

When you combine that and you see some of the stuff that’s coming out about possibly dead people requesting ballots, based on information that you can access off of the Secretary of State’s website. It certainly raises questions.

The bottom line, Eggers said, is that mail-in voting is “by far the most suspectable form of voting fraud.”

“I would never give my wallet to somebody else and ask them to take it to the bank for me,” Eggers said. “So the idea of sort of an additional layer in between you and the ballot box, I mean, … the system wasn’t set up for the massive increase.”