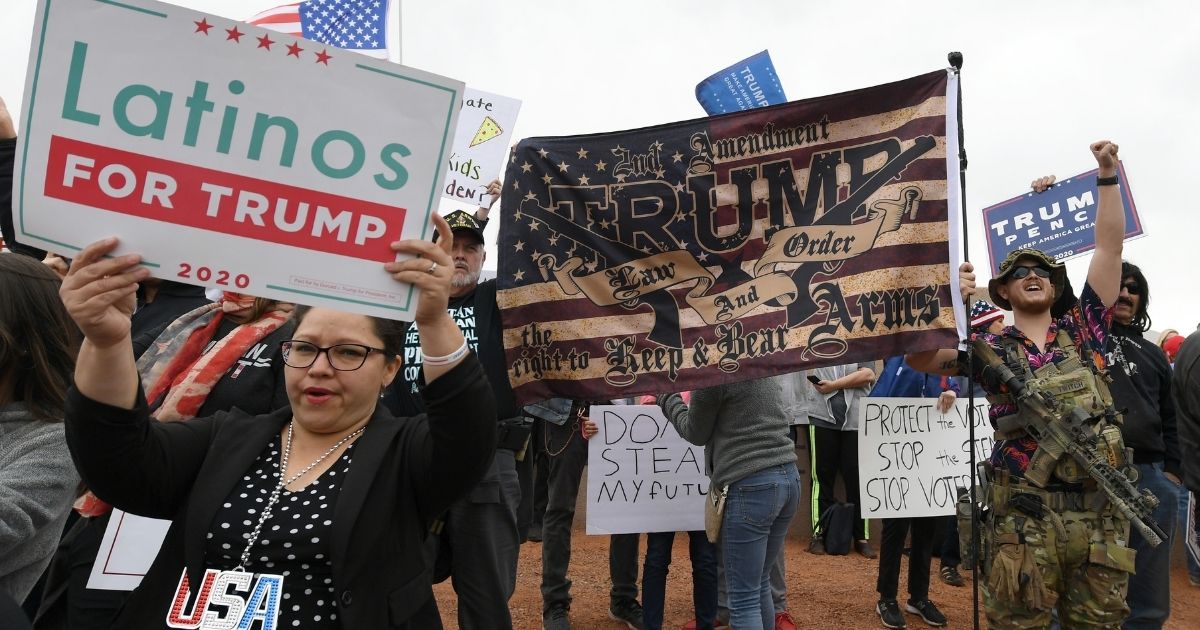 When an angry mob of Trump supporters stormed the Capitol on Jan. 6, the overwhelming majority of politicians and political commentators from across the political spectrum condemned the rioters and their incursion.

Members of the left took things a bit farther with their condemnation, however, by describing the incursion as a violent insurrection full of white supremacists following Donald Trump’s orders.

This claim was clearly false for a number of reasons — Trump repeatedly called for peace and specifically demanded the rioters go home.

Moreover, when it came to the “white supremacists” claim, many members of the mob were minorities themselves.

This reality in and of itself should have been enough to disprove the left’s white supremacist mob narrative.

However, one Op-Ed writer from The Washington Post, Professor Cristina Beltrán of New York University, made the argument that this was still the case on Friday.

Ironically, Beltrán’s argument was a more clear example of racism than anything that happened at the Capitol on Jan. 6.

According to her, the minorities present at the Capitol incursion, and all minorities who support Trump in general, are embodying “multiracial whiteness.”

“One of the organizers of the ‘Stop the Steal’ movement is Ali Alexander, a Trump supporter who identifies as Black and Arab. The chairman of the neo-fascist Proud Boys is Enrique Tarrio, a Latino raised in Miami’s Little Havana who identifies as Afro-Cuban; when he arrived in Washington for the Jan. 6 march, he was arrested for allegedly burning a Black Lives Matter banner taken from a Black church the month before,” Beltrán wrote.

Is this Op-Ed an example of anti-white racism?

“What are we to make of Tarrio — and, more broadly, of Latino voters inspired by Trump? And what are we to make of unmistakably White mob violence that also includes non-White participants? I call this phenomenon multiracial whiteness — the promise that they, too, can lay claim to the politics of aggression, exclusion and domination.”

It is important to note — Trump’s base has its fair share of radicals. This is the case for all political movements. However, throughout Trump’s term as president, leftists have wrongly claimed that Trump’s base is majority radical, as Beltrán does here.

While Republicans and conservatives openly denounce the radicals on their side, leftists and mainstream Democrats often defend their own radicals, as was evidenced during the rampant surge of riots and looting sprees that occurred throughout 2020 at various Black Lives Matter protests.

Beltrán continued by explaining how exactly she defines “multiracial whiteness.”

“Multiracial whiteness reflects an understanding of whiteness as a political color and not simply a racial identity — a discriminatory worldview in which feelings of freedom and belonging are produced through the persecution and dehumanization of others,” Beltrán wrote. “For voters who see the very act of acknowledging one’s racial identity as itself racist, the politics of multiracial whiteness reinforces their desired approach to colorblind individualism.”

RELATED: Woman Thought to Be Behind Violent 1983 Bombing of Capitol Was a Big Player in Democrats’ Favorite Organization: Black Lives Matter

“In the politics of multiracial whiteness, anyone can join the MAGA movement and engage in the wild freedom of unbridled rage and conspiracy theories.”

In the minds of leftists such as Beltrán, supporting reasonable policies on border security and immigration reform constitutes the “persecution and dehumanization of others.”

As is now sadly the case with many members of the Democratic Party, Beltrán is completely unwilling to honestly contend with conservative policy positions, instead opting to defame them as evil and racist.

In her mind, it couldn’t possibly be the case that some minorities actually support conservative policies. They had to have been seduced by the evil power of “whiteness.”

Throughout his presidential tenure, Trump has never once emphasized racial identity as important, as Beltrán claims here.

This is why she doesn’t produce even one example of Trump doing so in her Op-Ed.

In reality, Trump and the vast majority of his supporters believe in the colorblind idea, which Beltrán appears to denigrate in her column — the idea that all individuals should be treated the same irrespective of their racial identity.

The idea that people should be judged by the content of their character rather than the color of their skin.

Those among the race-obsessed left, including supporters of the Black Lives Matter movement and Critical Race Theory, believe exactly the opposite — that all people should be treated differently based on their racial identity and that the most evil of all racial identities is white.

In the end, Beltrán’s Op-Ed proves she’s just as racist as the supposed white supremacists she hates so much.

I had Andrew on last year to give people hope, before there was a sense of accountability on COVID