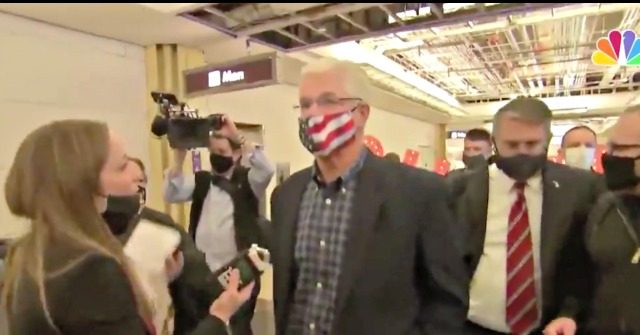 Activists met Michigan Senate Majority Leader Mike Shirkey in the Washington, DC, airport on Friday and heckled him as he made his way to meet President Trump.

Shirkey and Michigan House Speaker Lee Chatfield met with Trump at the White House that afternoon.

As Shirkey made his way through the terminal, he was heckled and badgered:

.@SenMikeShirkey just arrived at Reagan Airport and was immediately surrounded by protestors chanting “Certify the results!” Shirkey and other Michigan GOP lawmakers are expected to meet with @realDonaldTrump today. pic.twitter.com/t9A9dXKtWO

“Certify the results!” one demanded.

“Sir, are you committed to upholding the results of a free and fair election?” another asked.

“Will you honor the will of the Michigan voters?” one pestered.

Another angle showed Shirkey walking as the mob continued to pepper him with questions and demands:

“Will you honor the will of the Michigan voters?”

Michigan Senate Majority Leader Mike Shirkey is met by protesters as he arrives in Washington to meet with President Trump on Friday. pic.twitter.com/Edw7JIlDv9

“Do you realize what you’re doing is wrong!” a man shouted.

“Why are you doing this?” he continued as a woman heckled, “Certify the results!”

“Go back to Michigan! People need you there!” the man commanded.

Women followed close behind with giant letters spelling out “SHAME.”

Shortly after the meeting, Shirkey and Chatfield posted a statement on Twitter:

My statement on our meeting with the President today: pic.twitter.com/npKXVFI60x

“The Senate and House Oversight Committees are actively engaged in a thorough review of Michigan’s elections process and we have faith in the committee process to provide greater transparency and accountability to our citizens,” they said.

“We have not yet been made aware of any information that would change the outcome of the election in Michigan and as legislative leaders, we will follow the law and follow the normal process regarding Michigan’s electors, just as we have throughout this election.”

They added, “Michigan’s certification process should be a deliberate process free from threats and intimidation.”

The State Board of Canvassers is scheduled to meet on Monday, November 23, to consider certifying the full state’s results, including Wayne County.