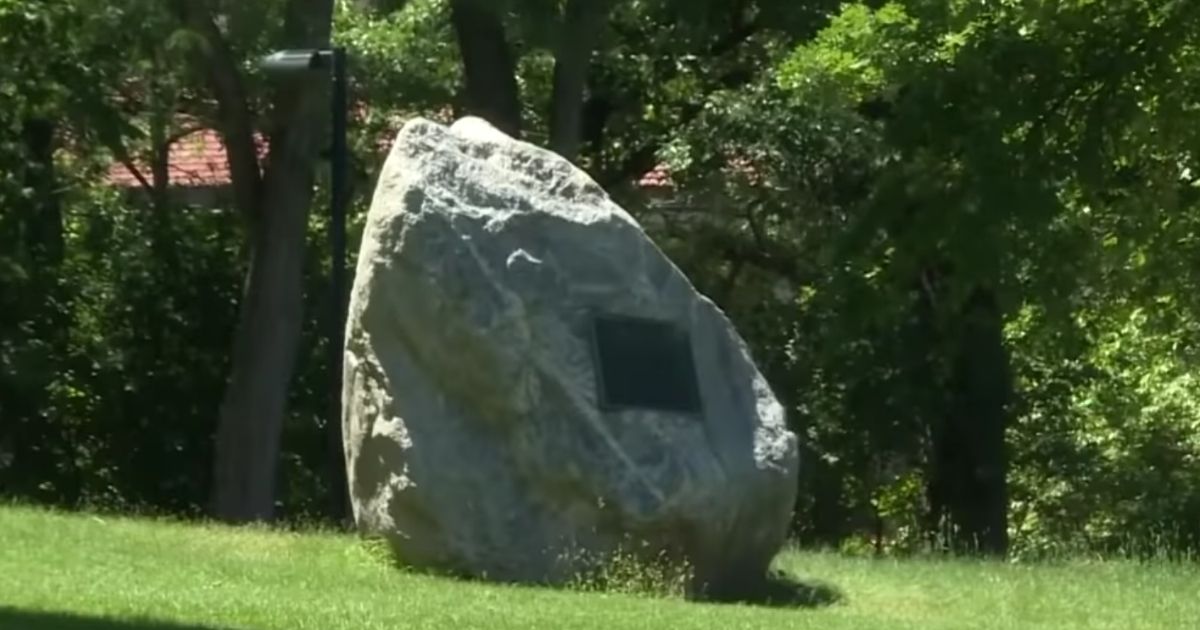 A geologically and archeologically-significant boulder on the University of Wisconsin-Madison campus may be slated for relocation, burial, or total destruction after two groups deemed it a racist symbol.

The Wisconsin Black Student Union proposed the relocation or destruction of the boulder — named “Chamberlin Rock” in 1926 after geologist and then-University President Thomas Crowder Chamberlin — after claiming it had a racist history.

A 1925 State Journal article chronicled the discovery of the rock as a “n—erhead,” a common term for large dark rocks in the 1920s that fell out of use by the 1950s. The article is the only known instance of the term being used to describe the rock, according to the Wisconsin State Journal.

According to the Journal, all members of UW-Madison’s Campus Planning Committee voted on Nov. 12 to ask Chancellor Rebecca Blank — who previously told the outlet she was not against the rock’s removal from its prominent Observatory Hill location — for next steps to determine its fate.

Removal options include relocating the rock off campus, burying the boulder where it was originally discovered or destroying it.

In June, WKOW-TV interviewed WBSU President Nalah McWhorter about Chamberlin Rock and the movement to remove an Abraham Lincoln statue. McWhorter claimed Lincoln, though an abolitionist, “didn’t think black people should have rights.”

She went on to claim that “renaming” Chamberlin Rock “doesn’t remove the history of oppression that it symbolizes and perpetuates.” University historians, however, have said the rock was colloquially, not officially, referred to using the slur and was named after Chamberlin a year after its discovery.

During a planning committee meeting, the 95-year-old article was discussed as having incorporated “disruptive language that is inappropriate by today’s societal norms.”

“Black students on campus have come together to envision a more welcoming campus experience,” McWhorter’s WBSU presentation at the meeting explained, calling the boulder “a symbol of the injustices students of color face on campus daily.”

The committee, according to its presentation, also recognized the rock is above “a catalogued human burial site and within 15 feet of an above‐ground effigy mound feature.” Its removal would cost between $30,000 and $75,000.

Do you think the boulder should be removed?

The transition will also require the Wisconsin Historical Society’s blessing and oversight, with the boulder being a “Pre-Cambrian era glacial erratic that is an iconic representation of Wisconsin glaciation period” and “within the documented Observatory Hill Archaeological Site boundary.”

Kacie Butcher, the university’s public history project director, also claimed a strong Ku Klux Klan presence existed near the campus in the 1920s, with black individuals “often mocked in campus satire periodicals as well as through minstrel shows that were dehumanizing to students of color.”

“This is an opportunity to prioritize students of color and engage with these complex conversations,” Butcher told the committee.

Although landscape historian Rob Nurre recognized the term’s offensiveness, he pointed out it was “in quotes” in the 1925 article, suggesting to “look at the context, both the history and the use rather than to the emotional appeal to the word that is being taken out of context.”

According to meeting minutes, Professor Brad Singer with UW-Madison’s Department of Geoscience stressed Chamberlin’s contributions to glaciation, advocating if removed, to relocate the boulder by the Ice Age Trail.

Meeting participant Brett Shaw asked if renaming the rock “in celebration of this change” had been discussed as a viable option. A Twitter user proposed the same to Blank.

@BeckyBlank Seems to me like a much more prudent thing to do, not to mention the cost savings, is to rededicate Chamberlin Rock with a new name selected by students of color. As horrible as it was, the slur stopped being used 70 years ago. Have some common sense.

McWhorter told the Journal the Black Student Union will begin to brainstorm new ideas for the space where the boulder currently sits to “reclaim” it for students of color.

“So it becomes a way to celebrate instead of having it as an empty space reminding us of what it once was,” she said.

‘Who Knows, I May Even Decide to Beat Them for a Third Time’

Supreme Court to hear challenge to denial of SSI benefits for...

‘Who Knows, I May Even Decide to Beat Them for a...

Texans may not be able to sue electric council for damages