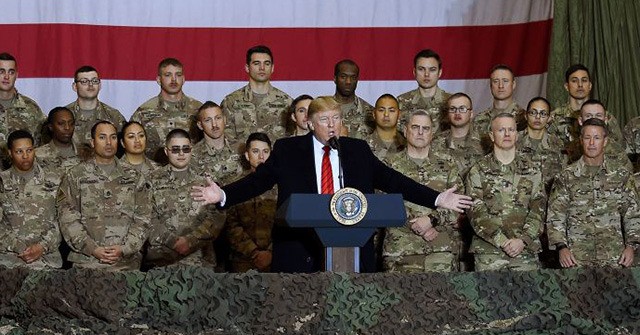 The U.S. is on track to meet President Donald Trump’s drawdown in Afghanistan to 2,500 Americans forces by January 15, a senior defense official said Sunday.

Although there are about 4,000 U.S. troops in the country currently, the official expressed confidence that the timeline will be met.

“We do this very well in [the Department of Defense]. We can get up very quickly, move great numbers of people very quickly, it seems to be it’s a very segmented and incremental withdrawal and we’re going to meet the timeline,” the official said, citing commanders on the ground.

U.S. defense and military officials have insisted they will still be able to continue the U.S.’s dual missions of training and advising the Afghan military and conducting counterterrorism missions with the smaller force.

“The US is going to continue to be there for the [Afghan National Defense Security Forces],” the official said, adding that the top U.S. commander in Afghanistan, Army Gen. Scott Miller “feels [we] can accomplish our reduced footprint and…our train, advise and assist, counterterrorism mission.”

The official said despite the drawdown, there will still be a “constellation” of U.S. and allied bases in Afghanistan.

And there will still be NATO forces and bases in the country, the official added.

The drawdown to 2,500 will mark the smallest troop levels the U.S. has had in Afghanistan it has had since December 2001.

American forces went into Afghanistan in October 2001 and toppled the Taliban for allowing al Qaeda leader Osama bin Laden to mastermind a terrorist attack against the U.S. from within its borders. The initial military campaign involved airstrikes, Army Special Forces partnered with local Afghan forces, and conventional forces, that toppled the Taliban within two months.

However, in the following years, U.S. and NATO allies expanded their mission in Afghanistan from toppling the Taliban and hunting down terrorists to trying to build a central Afghan government and national military force that could prevent the Taliban from returning to power and allowing al Qaeda and other terrorists to regain safe haven. To conduct these two missions, the U.S. saw its troop numbers grow to 100,000 in the country at one point, in 2010.

The U.S. also poured hundreds of billions of dollars into Afghanistan in reconstruction projects, government capacity building, and training and equipping government military and police forces.

However, the Taliban, with support from outside actors, was able to regain strength and wage a bloody insurgency against U.S., allied, and Afghan security forces. U.S. military leaders have called the war between the U.S. and allied-backed Afghan government and the Taliban a stalemate for the last several years. In addition, a new terrorist group — the Islamic State Khorasan (IS-K) has been able to establish a foothold in the country.

Former President Obama had campaigned on ending the war in Afghanistan, but despite a much-vaunted troop and civilian surge, the administration handed over the war over to the Trump administration with more than 8,600 U.S. troops there.

Trump in the beginning of his administration added several thousand additional U.S. troops, but began drawing them down earlier this year. The Trump administration helped start peace negotiations between the Taliban and the Afghan government, and has agreed to withdraw all U.S. troops by May 2021 if the Taliban lives up to its commitments, which includes ending attacks against U.S. and allied troops and renouncing al Qaeda.

U.S. officials acknowledge that although the Taliban has refrained from attacking U.S. and NATO forces, it has continued to attack Afghan forces and it has not yet renounced al Qaeda.

“The Taliban are not fully meeting their [counterterrorism] commitments. We recognize this [and] they need to do more to reduce this violence,” the official said.

But U.S. military leaders insist that even with the smaller footprint of 2,500 troops, the U.S. will still be able to hit terrorists if necessary, with the help of intelligence and air power.

“We still have as a government and a department, we still have concerns about al Qaeda in Afghanistan, and certainly ISIS and their activities, long after our footprint changes, we’re still going to have a very laser focus on those activities and those groups,” the official said.

“It’s going to be a winding road,” the official added.

Asked how many U.S. troops may still be in Afghanistan in a year, the official replied, “I don’t know the answer to that question. I don’t know.”