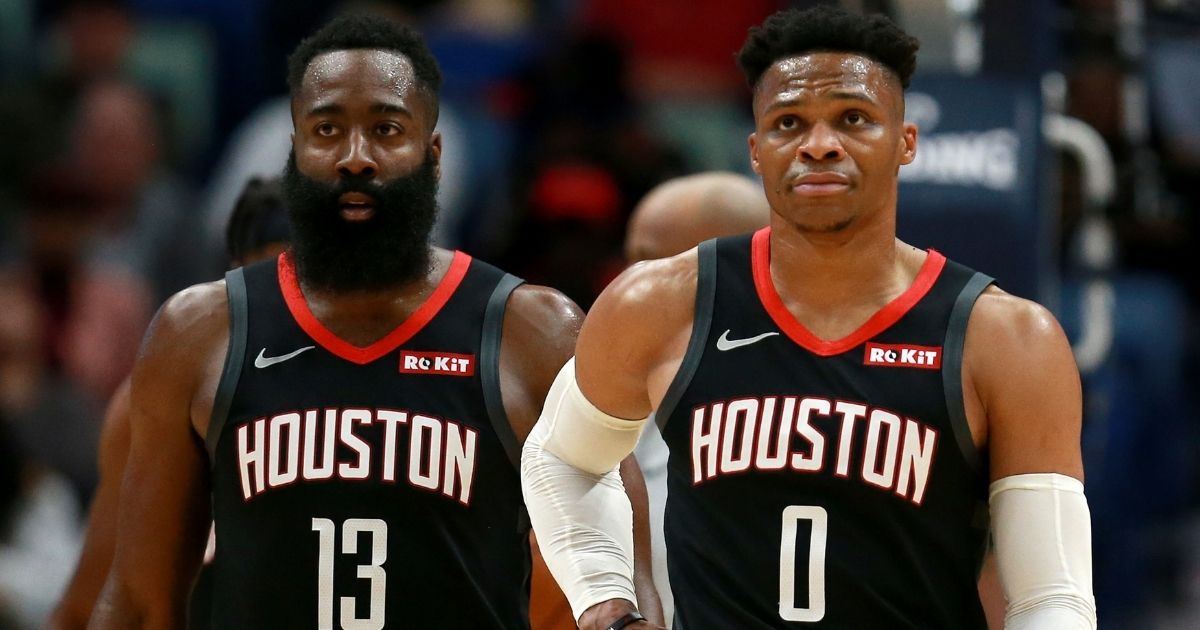 Two of the NBA’s biggest superstars reportedly want out of their contracts due to their team owner’s support for President Donald Trump.

If you thought professional basketball was about to pivot and make a return to being apolitical, as was hinted at by NBA Commissioner Adam Silver last month, think again.

The woke league’s landscape is being redrawn as teams make trades, and the Houston Rockets could potentially lose both Russell Westbrook and James Harden over team owner Tilman Fertitta’s political leanings.

The New York Post reported Fertitta has long been a GOP donor and that the billionaire is close with Trump.

During an interview on “The Odd Couple” podcast with Chris Broussard and Rob Parker, NBA reporter and insider Ric Bucher claimed that the perennial contender Rockets are on the verge of splitting up, and it has nothing to do with the exits of coach Mike D’Antoni or pro-Hong Kong freedom general manager Daryl Morey.

Per Bucher, there is a “revolt” among the Rockets players due to Fertitta being a Republican.

“I immediately thought this was Daryl Morey leaving, and Mike D’Antoni leaving, and Russell Westbrook and James Harden going ‘no offense to Stephen Silas or Rafael Stone, but we don’t want a starter kit, we’re playing for a championship,’” Bucher said.

Do you think the NBA will recover from its embrace of leftist politics?

He added, “No matter how much you regard Stephen Silas or Stone, these guys are brand new at the job, and what’s our expectation that they’re going to be able to make the moves necessary for us to leapfrog the Lakers.”

Bucher then disclosed that he’s heard Westbrook and Harden, who only just began playing together this season after previously reaching the NBA Finals together with Kevin Durant with Oklahoma City in 2012, want off the team because the owner is a Republican.

“But what I heard is — and we know how much politics and political position had to do with the boycott and protests during the Bubble — I’m hearing that Tilman Fertitta’s strong Republican support and donations is one of the things that is contributing to this dissatisfaction, and those two [Westbrook and Harden] are not the only ones to want out of Houston,” Bucher said.

“Lesser players are of the same mind. There is a revolt here because they look at Fertitta as a guy who supports the current president.”

Never mind the NBA’s credibility is in shambles over its embrace of leftist politics this past season, which likely contributed to record lows in viewership.

RELATED: If Rockets Star James Harden Lived in China, His Iconic Beard Might Be Illegal

Never mind that a recent poll found that people view politics and the league as being married.

Players are now reportedly reshaping the league’s landscape over the politics of other people.

It’s not likely to help rehabilitate the NBA’s tarnished image with many fans.

In a recent poll of 1,400 Americans about race and law enforcement, Reality Check Insights decided to ask respondents about the NBA, Outkick reported.

As Outkick reported, the survey “suggests that the image of the NBA has changed into that of a political organization that plays basketball on the side.”

“People are not even thinking about the NBA as a sport anymore,’’ Reality Check Insights CEO Ben Leff said. “They’re literally evaluating it as an overt political thing.’’

The NBA has become an overt political thing, and according to the Associated Press, the league fell $1.5 billion short of revenue projections for this past season.

Players are being sent a very loud message from the market, but they don’t appear to be listening to it.

Despite a financial gut punch for their league and the abandonment of once-adoring fans, two of the NBA’s biggest stars are reportedly seeking an exit from a competitive team because they don’t like how the owner votes.

The sense of entitlement is mind-boggling.