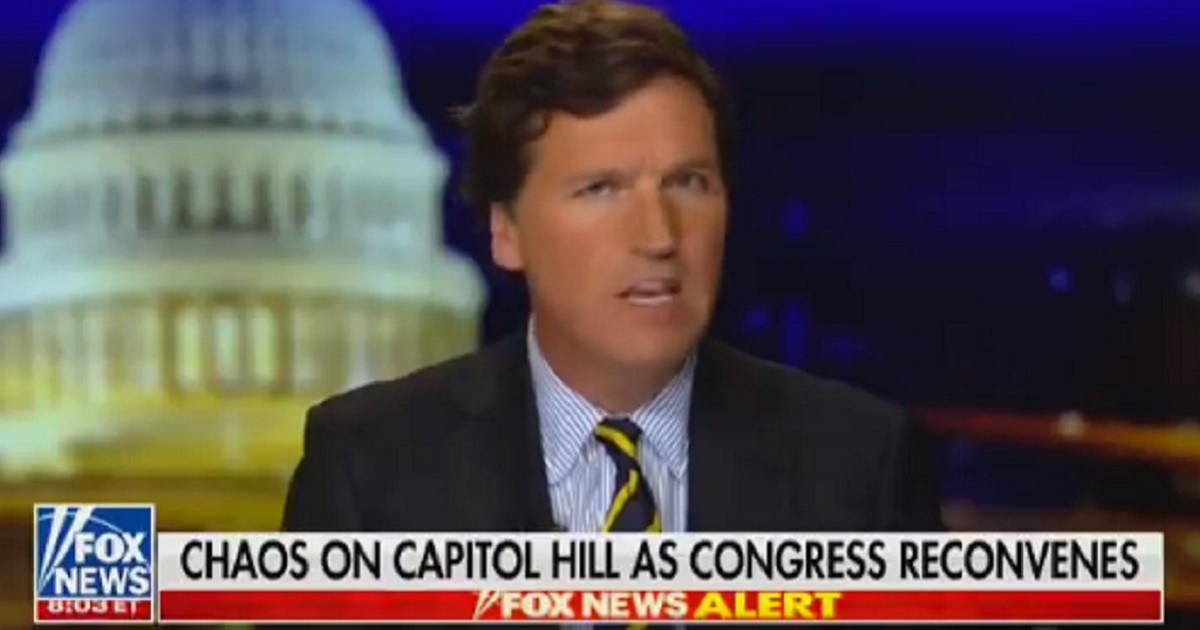 For Tucker Carlson, the real lesson of the chaos at the nation’s Capitol is the one most likely to be ignored.

The bizarre images of Americans storming their seat of government — on a day traditionally given over to merely certifying the people’s will as expressed through the ballot box — are being used already by Democrats and the establishment media to discredit widespread doubts about the 2020 vote.

But as Carlson reminded the country in his Fox News monologue on Wednesday, the outrage didn’t happen in a vacuum — and it isn’t likely to go away anytime soon.

“The only reason this country is rich and successful is because for hundreds of years, we’ve enjoyed a stable political system,” Carlson said. “And the only reason that system is stable is because it’s a democracy. It responds to voters.”

For millions of voters after the 2020 election, the faith in that response is shaken.

TRENDING: As Democrats Secure Total Control of US Government, China Makes Its Move

“You can dismiss them as crazy, you can call them conspiracy theorists, you can kick them off Twitter, but that won’t change their minds. Rather than trying to change their minds to convince them and reassure them that the system is real, that the democracy works, as you would do if you cared about the country or the people who live here, our new leaders will try to silence them.”

Check out Carlson’s monologue in the Twitter post below. As usual with Carlson, the whole thing is worth watching, but the key points start at about the 3:30 mark.

“What happened today will be used by the people taking power to justify stripping you of the rights you were born with as an American” —Tucker Carlson. pic.twitter.com/GwSog3Vzz2

“As long as people sincerely believe they can change things by voting, they stay calm. They don’t storm the bastille. They don’t burst into the House chamber,” Carlson said.

“They talk and they organize and they vote. But the opposite is also true. If people begin to believe that their democracy is fraudulent, if they conclude that voting is a charade, that the system is rigged and it’s run in secret by a small group of powerful dishonest people who are acting in their own interests, then God knows what could happen.

“Actually, we do know what could happen. It’s happening right now. It’s happened in countless other countries over countless centuries, and the cycle is always the same because human nature never changes.

“‘Listen to us!’ screams the population. ‘Shut up and do what you’re told,’ reply their leaders. In the face of dissent, the first instinct of illegitimate leadership is to crack down on the population. But crackdowns never make it better. Instead, they always make the country more volatile and more dangerous. The people in charge rarely understand that …”

Now, obviously, Democrats and their establishment media allies have already made it clear they’re not going to accept that.

The social media giants of Facebook and Twitter have all but banned any questioning about the credibility of former Vice President and now President-elect Joe Biden’s victory. The establishment media has adopted the party line on the topic with a knee-jerk uniformity that would gladden the heart of a Joseph Goebbels.

None of that will change the fact that while the violence on Wednesday was utterly inexcusable, it was by no means inexplicable.

For tens of millions of Americans who voted in good faith for Donald Trump, a man they saw standing up to a corrupt political-media complex that attacked him relentlessly as a candidate, then even more ferociously after his unlikely upset of Hillary Clinton in 2016, the party line isn’t working.

Those tens of millions of Trump supporters watched as a baseless accusation of “Russia collusion,” originated and paid for by the Clinton campaign, plagued Trump’s presidency with a “special counsel” investigation that was revealed as a malicious farce when the truth finally came out.

Then they watched a blind, power-mad partisan impeachment effort — based on the flimsiest of charges — go bust.

Then they saw Trump’s presidential re-election campaign unfold in the face of the worst health crisis the world has seen in a century, amidst unceasing attacks by every institution of American society — the establishment media, the cultural elites of Hollywood and academia — while his opponent was received with obsequious treatment that would make Stalin blush.

(The fact that the Hunter Biden story was not only ignored by the establishment media, but actively, unimaginably suppressed by social media, is a part of the 2020 election story that will take years to be fully appreciated.)

And still, they turned out by the tens of tens of millions — giving Trump 10 million more votes than he received in 2016, only to watch those votes defeated in a handful of cities run by Democratic machines in a handful of states, some with richly deserved reputations for corruption.

Then they watched courts turn away election challenges for seemingly spurious reasons, or for no reason at all. They listened as the establishment media repeatedly referred to Trump’s charges as “baseless” in the face of countless apparently credible allegations to the contrary, and without even a modicum of effort to establish the truth of the matter.

And now, the same establishment media that spent almost an entire year spreading the myth of the “mostly peaceful” riots that stormed through cities nationwide is shocked that a demonstration in D.C. turned violent?

What happens next, though, is crucial. And there Carlson delivered a warning: Jan. 6 is going to become the pretext for the powers that think they’ve defeated Trump but still have good reason to fear the movement he gave voice to.

“What happened today will be used by the people taking power to justify stripping you of the rights were born with as an American,” Carlson predicted.

Do you think the government is going to try to crack down on political dissent?

“Your right to speak without being censored, your right to assemble, to not be spied upon, to make a living, to defend your family, most critically. These are the most basic and ancient freedoms that we have. They are why we live here in the first place. They’re why we are proud to be Americans. They are what make us different, and they’re all now in peril.”

Then he addressed the country’s leadership:

“When thousands of your countrymen storm the Capitol building, you don’t have to like it. We don’t,” he said.

“You can be horrified by the violence, and as we said and we’ll say it again, we are horrified. It’s wrong. But if you don’t bother to pause and learn a single thing from it, from your citizens storming your Capitol building, then you’re a fool. You lack wisdom and you lack self-awareness. You have no place running a country.”

Those are words the newly empowered Democrats are unlikely to take to heart. In fact, it’s a message they’re probably going to reject entirely. But that doesn’t mean it’s going away.

The violence in the Capitol on Wednesday was inexcusable, it’s true, but it was also a symptom of something much deeper at play.

And that’s a lesson those in Washington, the establishment media and the social media industry don’t seem willing to learn.

Carlson’s monologue Wednesday night was a warning for Americans about their government. What happened Wednesday afternoon should be a warning, too.