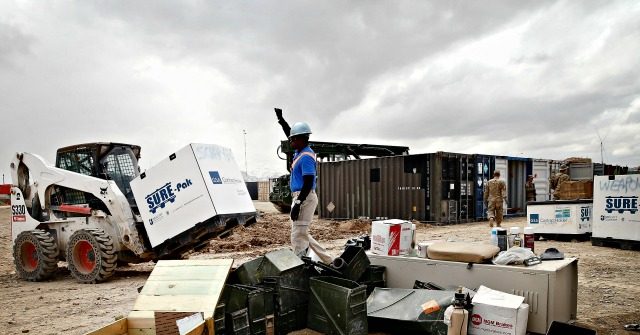 President Donald Trump this week ordered U.S. troops to draw down to 2,500 in Iraq and Afghanistan, winning applause from populist conservatives and Democrats in Congress,but criticism from hawks and adherents to establishment foreign policy.

Sen. Josh Hawley (R-MO) expressed support, arguing that the original U.S. counterterrorism mission in Afghanistan has given way to nation-building — the costs of which are borne overwhelmingly by working Americans:

The American people deserve an end to this war. They deserve to know their sons and daughters will not be put in harm’s way unless it is absolutely necessary. And they deserve to see their tax dollars actually being used to defend them – from Chinese domination, above all – or reinvested at home, in their families and communities.

President Trump understands that our troops should only be used to defend American interests where there is an immediate or ongoing threat to our citizens or allies. And President Trump knows that our propensity for endless wars has bankrupted our grandchildren’s financial futures. I am grateful for the president’s courage and commitment to his promises, and I look forward to the return of our troops.

“After speaking with the Acting [Defense Secretary Chris Miller] this morning, I believe reducing our forward deployed footprint in Afghanistan down to 2,500 troops is the right policy decision,” he said.

His military strategy has always reflected conditions on the ground, rather than being tied to an arbitrary calendar like his predecessor. Keeping the right military footprint in Afghanistan to perform counterterrorism missions and support our allies and Afghan partners is an essential part of that realistic approach, and is vital to protecting the homeland from attacks.

However, establishment Republicans and Democrats in the House and Senate criticized the decision.

Sen. Ben Sasse (R-NE), a member of the Armed Services Committee and a frequent critic of the president, called the decision a “weak retreat.”

“Terrorists will exploit vacuums – President Obama’s 2011 withdrawal from Iraq opened the door for ISIS. I fear this weak retreat is not grounded in reality and will make the world a more dangerous place,” he said in a statement.

Marine veteran Rep. Seth Moulton (D-MA) and Air Force veteran Rep. Adam Kinzinger (R-IL) called it a “premature drawdown” and cautioned against withdrawals “without a clear plan to counter the multitude of security challenges we face in the region,” in a letter reported by Politico.

“We believe that there is strong bipartisan support from Congress and the Administration for both Iraq and Afghanistan,” they wrote. “Any premature drawdown without thoughtful consideration of the real-world conditions on the ground would be ill-advised.”

Criticism from other establishment Republicans and Democrats fell along those lines.

The U.S. war in Afghanistan began in October 2001, after al Qaeda leader Osama Bin Laden planned the September 11, 2001, attacks against the United States from a safe haven in Afghanistan’s mountainous border region.

U.S. forces quickly ousted the Taliban, who granted Bin Laden safe haven. However, the U.S. then embarked on nation-building projects in Afghanistan while turning its attention to a war in Iraq in 2003. Both wars became mired in an insurgency, as the Taliban reconstituted in Afghanistan and both Shia and Sunni insurgents targeted American forces.

Only after a costly military surge in Iraq that saw as many as 170,000 forces deployed and help from Sunni insurgents was the U.S. able to turn the tide in Iraq.

Former President Obama ordered as many as 100,000 forces to Afghanistan, but it failed to quell the Taliban insurgency. He had campaigned on ending both wars, but left office with 8,600 U.S. forces there. He also withdrew all U.S. forces from Iraq, which contributed to a vacuum exploited by ISIS.

Trump, however, is not pulling out all U.S. forces from Iraq or Afghanistan. His administration has helped broker peace talks in Afghanistan between the U.S.-backed government and the Taliban that would lead to full withdrawal of U.S. forces by next year if successful.