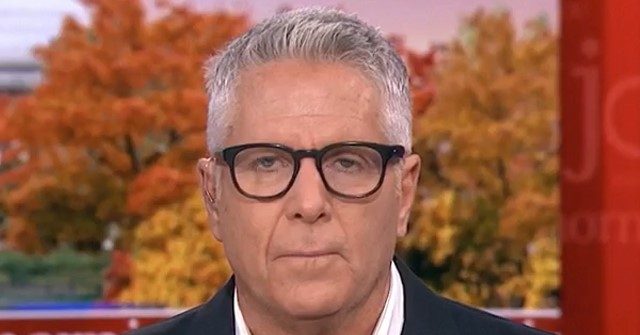 MSNBC contributor Donny Deutsch on Monday reacted to the report claiming President Donald Trump discussed invoking martial law in the Oval Office of the White House to invalidate Joe Biden’s win in the 2020 presidential election over claims of voter fraud.

Deutsch said during “Morning Joe” that Trump is trying to put an end to the “Madisonian democracy” because he is racist. He presented the “Muslim ban,” Trump’s comments about Mexicans, and his policies aimed at China as proof.

“You know, Joe … a lot of sunshine in, I guess, our system health. Despite all of this, and you’ve said this many times on this show, and hats off to the authors of our Madisonian democracy that even when a fascist shows up like this and even when 50 percent of this country still is somehow behind him, our system holds,” Deutsch outlined. “And that is something we can all take a deep breath and say, ‘Yay. The good guys do win in the end.’ Joe, when people want to throw out what we have, which is democracy. It means they’re basically unhappy, and they’re willing to kind of stand by and watch anything go. And I’m just going to say again — this is what we have to be honest about. I think it’s race. I do. It’s not his policies about China. And it’s not his policies. It’s certainly not his COVID response, and it’s certainly not his nonresponse to giving out relief to people.”

“I just think this country, and this is what has to be dealt with, and this is something that is not an easy solution is that what is it that’s — what nerve did he hit by saying Muslim ban, by saying about the Mexicans,” he continued. “But that’s where no president, no politician has ever gone before in any substantial office, at least not in the last 40 or 50 years. What is it going on in the country now? What is it that’s so terrifying for white people? And that’s what this is about, that people of color are threatening them so deeply they’re willing to dismiss Democratic tenets? And I’m just repeating what I said earlier because I have no other explanation, Joe. There’s nothing else there. We could put the 10 smartest scholars in the room. That’s it. You know I am saying the quiet part out loud. There is no other explanation, and that’s what we have to deal with as a country right now. We are a divided country, and it’s about race. I don’t care what anybody else says.”

Man Who Allegedly Threatened To Attack Democrats Charged With Possession Of...

Donald Trump Fought For Us. Now It's Our Turn

Ohio curfew to shorten thanks to falling hospitalizations