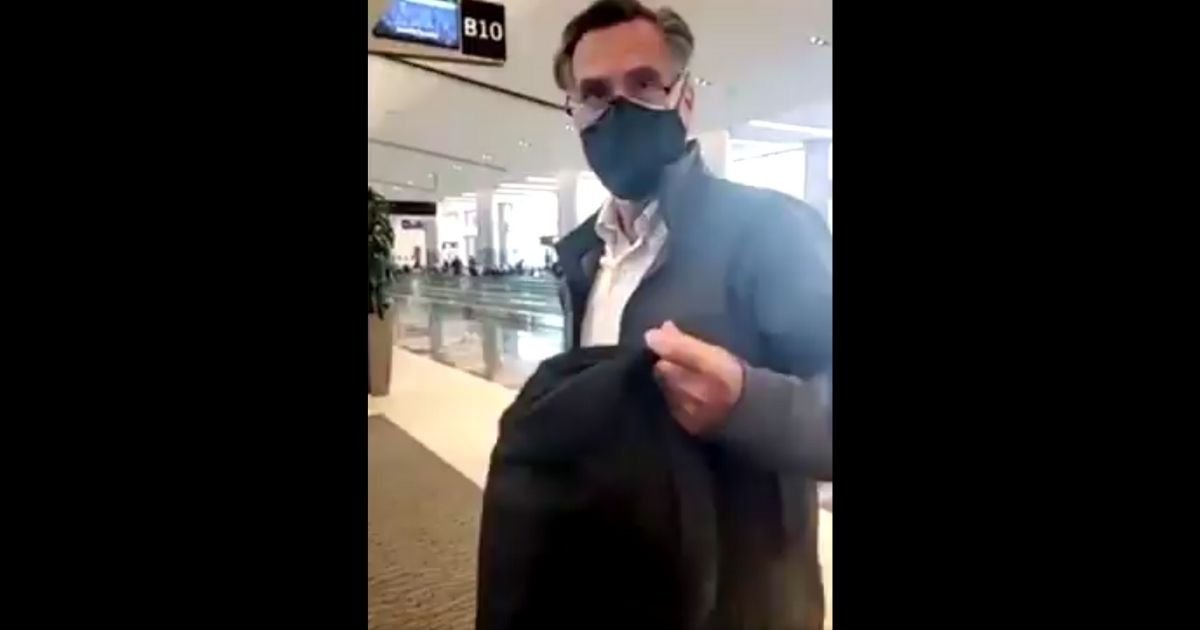 Republican Sen. Mitt Romney of Utah found himself the target of several Trump supporters, both at an airport and during a flight, as he headed to Washington, D.C., on Tuesday, according to multiple videos posted online.

Romney was first confronted while sitting in a chair at Salt Lake City International Airport waiting to board a plane, per a video posted on Twitter. In the video, a woman filming him unloaded on the GOP senator.

Her message to Romney: the Republican Party’s base is no longer content with the same old, same old.

“Why aren’t you supporting President [Donald] Trump?” asked the woman, who didn’t appear to be in the mood for a milquetoast answer.

“I do agree with many of the things he is for, and I support those things,” Romney told her. He was then dismissive of the woman, who said she was one of his voters and expressed her concern for election security.

When asked why he didn’t intend to join other GOP senators in rejecting presidential candidate Joe Biden‘s purported Electoral College victory, he stated, “It’s a long story, but we have a Constitution, the Constitutional process is clear, I will follow the Constitution, and I will explain all that when we meet in Congress this week.”

“These people won’t be able to walk down the street.”

It wasn’t the right answer to give as the only senator who has ever voted to impeach his own party’s president — at least not for the woman who cornered the 2012 GOP presidential nominee.

Do you think establishment Republicans will be welcome in the GOP going forward?

“You’re a joke,” the woman told Romney as he walked away. “Absolute joke. It’s a disgusting shame.”

If the public shaming wasn’t enough, another video posted to Twitter later showed Romney apparently being ridiculed by several reported Trump supporters on his flight to D.C.

Passengers chanted “Traitor!” at the lawmaker, while one woman asked him to explain his connection to the Ukrainian energy company Burisma and presumptive President-elect Biden.

Video of Sen. Mitt Romney (R-Utah) being heckled by Trump supporters on a flight from Salt Lake City to Washington, D.C. pic.twitter.com/wZS4CA2xFf

RELATED: Despite Handing $700 Million to Sudan, Romney Says Bigger Stimulus Checks Are Too Expensive: ‘We Can't Just Have Free Money'

One could argue that Romney‘s treatment on Tuesday, right or wrong, is a metric of where the GOP base stands.

It’s not with Romney, and it doesn’t appear to be with those like him, as Republican voters prepare for the prospect of being under the thumb of Democrats — who, after Tuesday’s Senate race in Georgia, will most likely be in control of Congress, and presumably the White House in two weeks.

Here’s a shocking number: 76 percent of Georgia Republicans who voted Tuesday said they felt the 2020 election was not fair, according to exit polling reported by The Washington Times.

Despite numbers showing the GOP faithful don’t currently have confidence in election integrity, on Wednesday Romney reportedly doubled down on his break with Trump, accusing the president of having “disgraced the office of the presidency” for challenging election results.

Romney: “it turns out telling voters the election is rigged is not a good way to turn out your voters…President Trump has disrespected the American voters, has dishonored the election system and has disgraced the office of the presidency”

Romney has arguably disgraced himself, though, in the eyes of those who have stood with the president through years of unrelenting attacks from every angle. Romney, from an optics standpoint, stands on the side of the same establishment media that called him racist before President Trump entered onto the scene.

The message is clear: the establishment’s Republican Party is dead, and it isn’t coming back. Too many of us voted for the late Sen. John McCain and Romney, and anxiously watched as they lost their respective elections and later went on to tell us who they were.

They weren’t fighters, that much is true. McCain singlehandedly saved the Affordable Care Act in 2017 after opposing it for years.

So many of us fervently supported President George W. Bush for eight years as he was relentlessly mocked and attacked by the establishment media, academia and Hollywood. He did nothing to defend himself, and when he finally spoke after leaving the White House in 2009, it was to criticize Trump’s movement — our movement — in 2017.

After Tuesday’s reported probable dual Senate losses in Georgia, the GOP may now be set to be an opposition party in a country where Democrats have been abusing policy and demographics to attempt to neutralize us for years.

Trump, while almost always doing things his own way, changed conventional wisdom with regard to winning, losing and fighting back.

He showed people that winning is a lot more fun.

But Trump wasn’t on the ballot in Georgia on Tuesday, and for those Republicans who voted, a vast majority apparently didn’t believe he was treated fairly when he was on the ballot in November.

Establishment Republicans almost always appear to be more than OK with losing, so long as they do it with honor. Trump, meanwhile, is a winner by nature.

He succeeded where the Romneys of the GOP failed by actually getting himself elected. His ideas are winning ideas, and the Republican Party elites can’t seem to stand him for rocking their boat. They opposed him as enthusiastically as the Democrats.

Democrats understand the establishment GOP, which is why they will seemingly go to any length to declare victory over a party that seems content with not winning. The GOP establishment has allowed them to weaponize the country’s institutions against conservatives, and those chickens have come home to roost.

Democrats win their fights because they’re aggressive. Establishment Republicans would apparently rather lose than win, so long as they don’t draw the ire of anyone outside of their own base. But that’s all over, now.

Trump created a road map for winning. The GOP establishment, including Romney, couldn’t stand him — or apparently those who voted for him — for that. While they enjoyed their dignified losses, they enabled the Democrats to force on all of us a radical agenda for eight years under former President Barack Obama.

They’re gearing up to do it again, beginning in 2021. This time, the dynamics of the GOP are the difference, as the base appears ready to move on from politicians like Romney.

Romney perhaps represents the past of the party better than any single person. And as an elected official, he’s earned the right to face the kind of pressure he saw on Tuesday from a constituency that simply wants a life of economic and individual liberty.

Romney, to many, represents little more than the losing that many conservatives fear is to come, as our governmental norms and Constitutional rights are sure to be on the chopping block in the next few years.

While it might have lacked decorum, Romney’s verbal tar and feathering on Tuesday at least likely reminded him, even if temporarily, that he answers to people far from the Washington swamp — a fact it sometimes appears our elected officials forget.

It was also confirmation that the GOP now belongs to President Trump’s policies.

While an imperfect man, Trump has arguably forever altered the party’s trajectory, and four years of successful leadership have set a high bar where lip service and decorum in the face of a dogfight are no longer the standard.