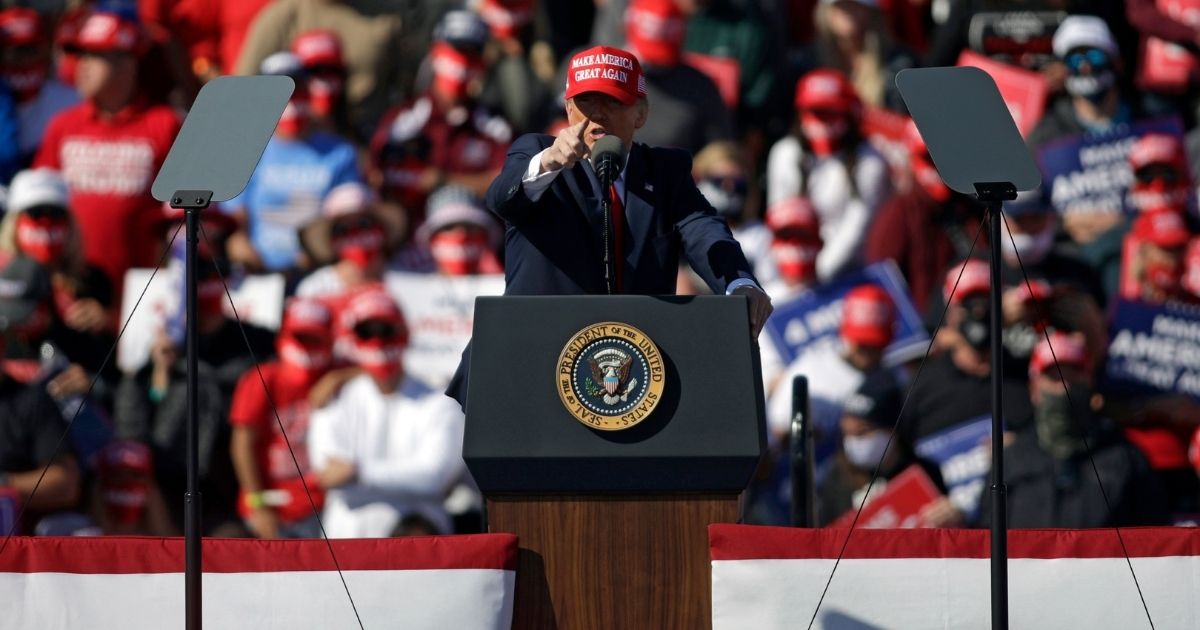 President Donald Trump appears encouraged by the numbers he sees coming out of Arizona, which is still in the process of counting votes.

He was responding to an Arizona Republic article whose headline claimed that Trump, based on the outstanding ballots, will not overtake Biden.

The Associated Press called Arizona for Biden the day after last week’s presidential election despite there being approximately 600,000 votes to be counted as of 11 a.m. that day.

CNN reported that day that Biden held approximately a 93,000-vote lead, or 51 percent to 47.6 percent (a 3.4 percentage point difference), down from over a 6-point lead on election night.

Do you think Trump can still win in Arizona and other swing states?

Garrett Archer of the Phoenix ABC affiliate KNXV-TV tweeted Wednesday night there were less than 25,000 ballots to be counted, with a majority of those in Pima County (where Tucson is located), which Biden carried overall.

Trump will need to take approximately three-quarters of the outstanding ballots to pull ahead of his Democratic rival.

Automatic recounts in Arizona are nearly impossible to trigger, requiring a difference of 0.1 percentage points or 200 votes between the candidates, whichever is smaller.

Arizona has less than 25k ballots remaining. The majority of these are in Pima county. pic.twitter.com/dDBG2M0m3T

The Trump campaign filed a lawsuit in Arizona over the weekend alleging in-person ballots were improperly rejected, The Hill reported.

RELATED: Republican Senator Promises To ‘Step In’ To Help Biden Get Classified Info

In a Monday letter to Arizona Secretary of State Katie Hobbs, GOP state Senate President Karen Fann called for an independent analysis of the voting data in the Grand Canyon State to address concerns that computer tabulated results may not be accurate, as has been true in other states.

Some, including Trump, have suggested results in certain states may have been electronically manipulated to favor Biden.

Every noteworthy tabulation error that has been discovered so far appears to have worked against the Republican candidate, including in a county in Michigan, which actually went for Trump and not Biden as originally reported.

“Assuming the allegations of fraud are without merit, an independent analysis would restore credibility and hopefully end the current controversy over fairness in the election process in Arizona,” Fann wrote.

Hobbs, a Democrat, responded in a letter to Fann, “It is patently unreasonable to suggest that, despite there being zero credible evidence of any impropriety or widespread irregularities, election officials nonetheless have a responsibility to prove a negative.”

Additionally, Trump campaign legal team attorney Ron Coleman pointed to a 2017 tweet by Hobbs in which she referred to the president’s supporters as his “neo-nazi base.”

This is Arizona’s secretary of state. The one in charge of certifying the election.

You read that right. https://t.co/RdLeEsAlRd

“This is Arizona’s secretary of state,” Coleman wrote. “The one in charge of certifying the election.”