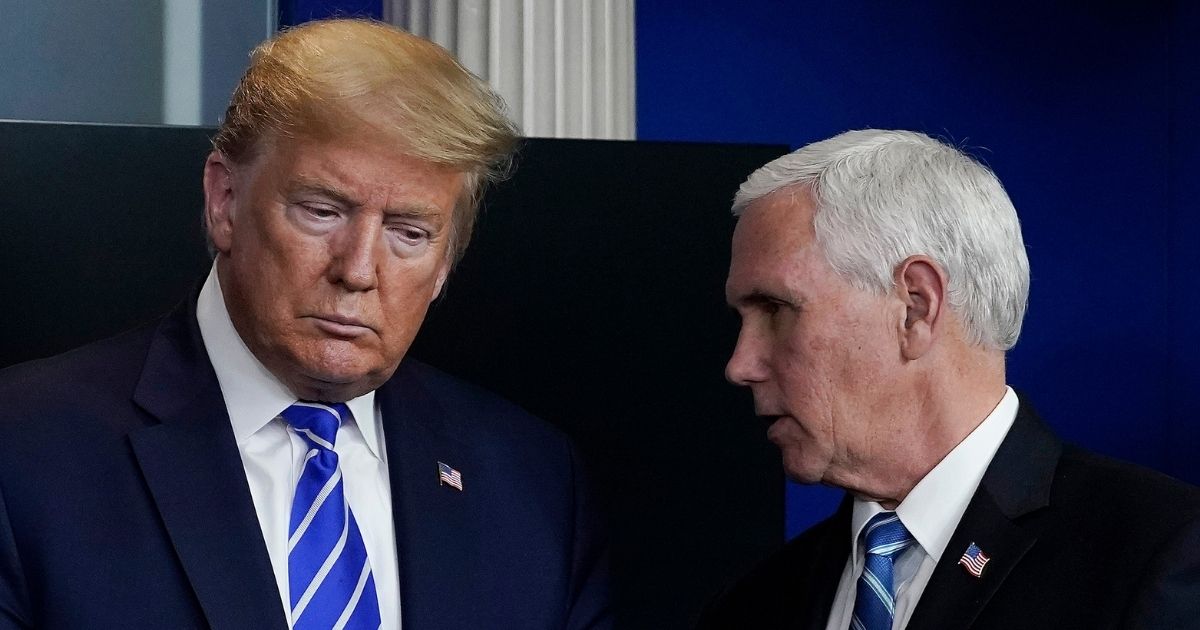 President Donald Trump is doubling down on his belief that Vice President Mike Pence has the power to throw out Electoral College votes from states in which electoral fraud has been proven.

Trump’s remarks come despite what The New York Times said were private comments from Pence to Trump on Tuesday that he does not believe he can single-handedly stop Congress from certifying the Electoral College results. If the results are certified, Democrat Joe Biden would become the next president of the United States.

Basing its report on what it said were “people briefed on the conversation,” The Times reported that Pence told Trump — during his weekly lunch with the president — about the limits of his role while presiding over Wednesday’s joint session of Congress.

In a Tuesday night statement, Trump called the above interpretation of his conversation with Pence “fake news.”

TRENDING: Will Don Lemon Be Canceled for What Was Just Spotted Behind Him During CNN Segment?

Trump has repeatedly and publicly said Pence can refuse to count Electoral College votes that are the result of fraud.

The Vice President has the power to reject fraudulently chosen electors.

Trump followed that up with another pair of Pence-themed tweets.

“If Vice President @Mike_Pence comes through for us, we will win the Presidency. Many States want to decertify the mistake they made in certifying incorrect & even fraudulent numbers in a process NOT approved by their State Legislatures (which it must be). Mike can send it back!” he tweeted.

“States want to correct their votes, which they now know were based on irregularities and fraud, plus corrupt process never received legislative approval. All Mike Pence has to do is send them back to the States, AND WE WIN. Do it Mike, this is a time for extreme courage!” he added.

If Vice President @Mike_Pence comes through for us, we will win the Presidency. Many States want to decertify the mistake they made in certifying incorrect & even fraudulent numbers in a process NOT approved by their State Legislatures (which it must be). Mike can send it back!

States want to correct their votes, which they now know were based on irregularities and fraud, plus corrupt process never received legislative approval. All Mike Pence has to do is send them back to the States, AND WE WIN. Do it Mike, this is a time for extreme courage!

On Monday, during a rally in Georgia, Trump spoke about his hopes for Pence.

Do you think Mike Pence has the power to reject electoral votes?

“Nah, Mike is a great guy,” the president said. “He’s a wonderful man and a smart man and a man that I like a lot. But he’s gonna have a lot to say about it. He — you know one thing with him: You’re going to get straight shots. He’s going to call it straight.”

As part of his duties as vice president, Pence will preside over the joint session of Congress that will be held on Wednesday to certify the results of the Electoral College.

The ritual process will be very different this year, because Republicans in the House and Senate have said they will object to the results in at least three states, which will trigger separate sessions of each branch of Congress as they debate the objections.

The objections result in an up to two-hour debate for each contested state’s results in which each house of Congress will consider those objections.  Although a vote will be held on whether to sustain the objections, that’s considered mostly a formality because Democrats control the House and many Republican senators who are part of that chamber’s majority have already gone on record as saying they will not support objections to the Electoral College vote.

Republican Rep. Louie Gohmert of Texas sued to have Pence be given the authority to decide which states’ electoral votes should count, but that suit was tossed out.

However, others noted that Pence’s ceremonial role is essentially to keep the procedure moving.

“Some have speculated that the vice president could simply say, ‘I’m not going to accept these electors,’ that he has the authority to do that under the Constitution. I actually don’t think that’s what the Constitution has in mind,” said Jay Sekulow, one of Trump’s lawyers.

“If that’s the case, any vice president could refuse any election,” he said. “It’s more of a ministerial procedural function.”

The Times, citing what it called an ally of Pence, said the vice president is trying to “thread the needle” to follow his required ceremonial role while also causing the least damage to Trump.

Citing “a person close to Mr. Trump,” The Times reported Pence could end up voicing Trump’s objections to the process during debate on one of the states to which Republicans will object.

Trump’s campaign has insisted that there has been voter fraud in states that include Arizona, Nevada, Georgia, Michigan and Wisconsin, as well as Pennsylvania. However, despite numerous claims of voting irregularities, including affidavits alleging fraud sworn to by reported eyewitnesses, no court has yet ruled that widespread fraud materially affected the results of the presidential election.