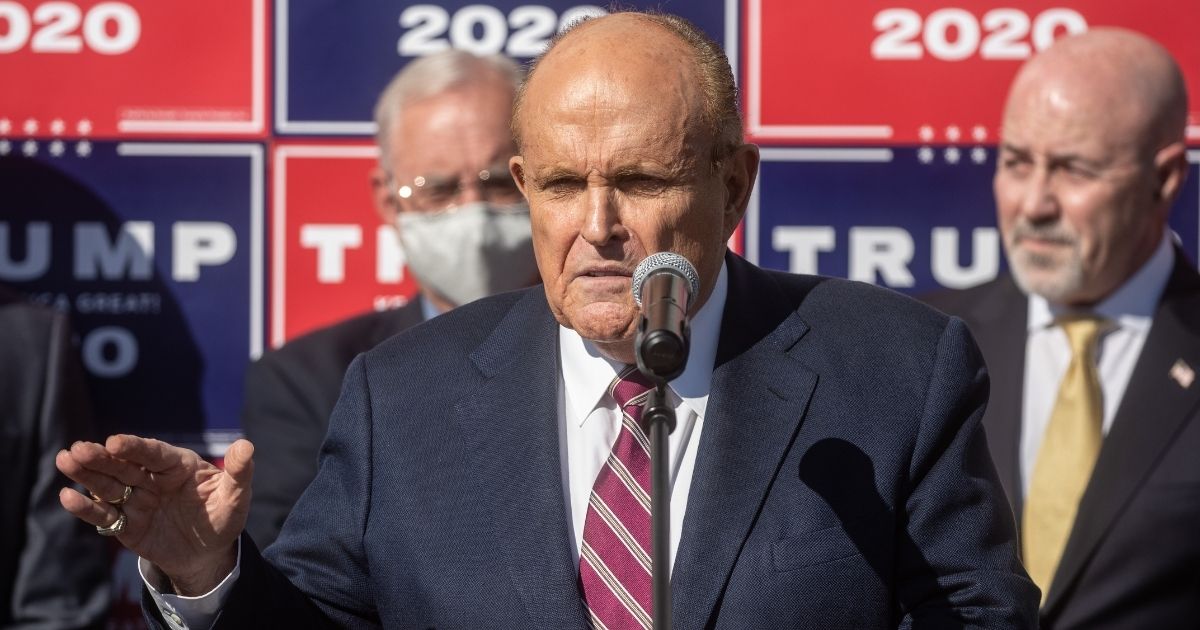 The Trump campaign has lawsuits ready to go this week that could radically change the picture of the presidential election, attorney Rudy Giuliani said Sunday.

Giuliani appeared on the Fox News show “Sunday Morning Futures” with Maria Bartiromo and said that the campaign’s evidence could change which candidate won in Pennsylvania, which is currently in the column of Democratic Joe Biden.

“In Philadelphia, where we are furthest ahead, we have about 60 or 70 witnesses in Pennsylvania, Philadelphia and in Pittsburgh. In Pittsburgh, we have observers who for 24 hours were kept out of the room or kept away from the room where they were counting the mail-in ballots, which of course are the highly suspicious ballots,” he said.

“During that period of time, at least 135,000 ballots were counted, none of which were observed by any Republican observer as the law requires,” he said.

Giuliani claimed that bundles of mail-in ballots were brought in late.

“It looked very much like they were trying to make up the 700,000 difference that they had from election night,” he said.

Giuliani alleged another 300,000 ballots were counted while no GOP observers were allowed to watch.

“Even though we went to court, and we were allowed to move 6 feet closer, the Democrat-machine people moved the counting place six feet further away. This is documented on videotape,” he said.

“There are upwards of 50 witnesses, and this will be the subject of a lawsuit that we file tomorrow for violating civil rights, for conducting an unfair election, for violating the law of the state, for treating Pittsburgh and Philadelphia different than the rest of the state,” Giuliani said.

Was the election stolen?

“This is something that just has to be addressed,” he said.

Giuliani said there is no way to determine the validity of thousands of ballots.

“We’re at now 450,000 definite mail-in ballots that they separated from the envelope, threw the envelope away. We can never tell if they’re valid or not,” he said.

Giuliani said the campaign will review whether ballots were cast in the name of people who are dead, and will look into back-dating ballots.

“We have evidence now, from not only the Post Office but from others, that there was back-dating. I can only tell you right now that that amounts to about 2,000 or 3,000 votes,” Giuliani said.

RELATED: President Trump Officially Has Received More Votes than Barack Obama Ever Did

“Do you believe that you have enough to actually change the fate of the election?” Bartiromo asked.

“Well, I think we have enough to change Pennsylvania. The Pennsylvania election was a disaster,” Giuliani said.

He said that overall, he believes up to 900,000 ballots will be called into question by the evidence the campaign has amassed since Election Day.

Giuliani speculated that ballots were kept in reserve in case they were needed.

Later in the interview, Bartiromo asked whether President Donald Trump should concede, now that Biden has been named as the winner by multiple media organizations.

“At this point, it would be wrong for him to concede,” Giuliani said.

“There is strong evidence that this was an election that in at least three or four states, and possibly 10, it was stolen,” Giuliani said.

“In other words, it was based on false votes. Now, you can’t let an election go into history without challenging that.”