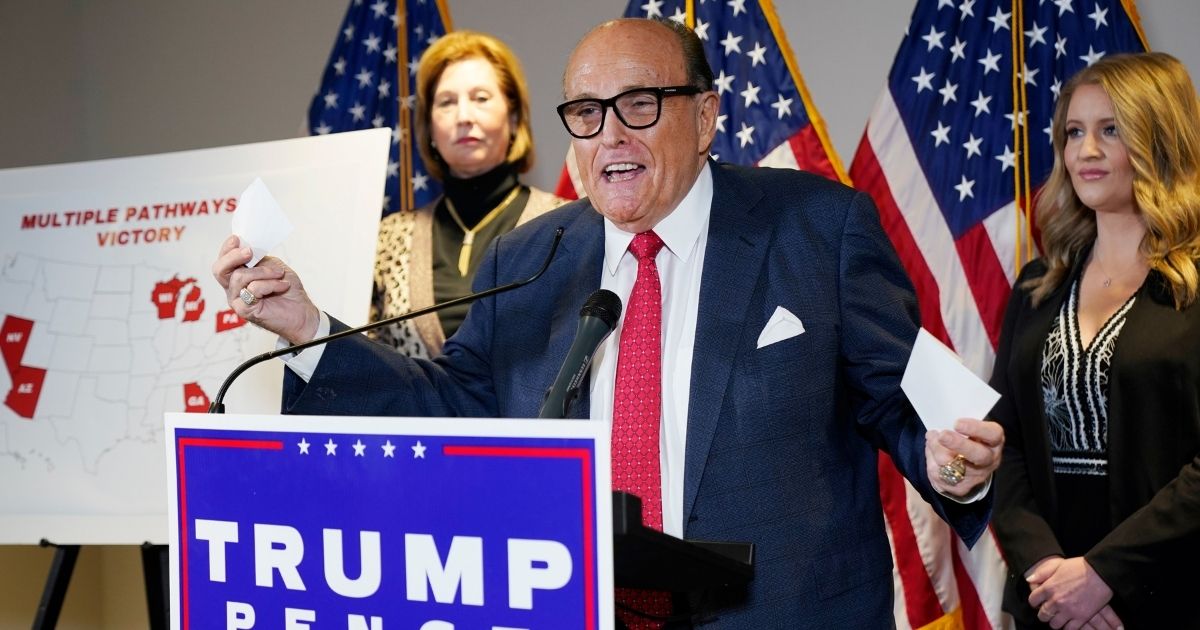 President Donald Trump’s re-election campaign is not dead yet, Trump attorney Rudy Giuliani insisted Thursday, as he said the campaign has a stockpile of sworn affidavits that could reverse the results that have given multiple key states to Democrat Joe Biden instead of the president.

As Giuliani spoke at a news conference in Washington, a poster next to him read “Multiple Paths to Victory” and highlighted the states of Arizona, Georgia, Michigan, Nevada, Pennsylvania and Wisconsin.

“The president way ahead on election night, seven or 800,000 in Pennsylvania, somehow he lost Pennsylvania,” Giuliani said. “We have statisticians willing to testify that that’s almost statistically impossible to have happened in the period of time that it happened.

He said it was “not a singular voter fraud in one state.”

“This pattern repeats itself in a number of states, almost exactly the same pattern, which to any experienced investigator or prosecutor would suggest that there was a plan from a centralized place to execute these various acts of voter fraud,” said Giuliani, a former federal prosecutor before he became mayor of New York City.

Giuliani said the effort was focused on major cities controlled by Democrats and ones that “have a long history of corruption.”

“Each one of these cities are cities that are controlled by Democrats. Which means they can get away with whatever they want to do,” he said.

Do you think there was widespread fraud in this election?

The Trump attorney said that even in court, Democrats control the outcomes.

“Unfortunately, they have some friendly judges that will issue ridiculously irrational opinions just to come out in their favor,” he said.

Giuliani said that in Pennsylvania, the campaign has amassed affidavits saying 682,000 ballots were cast “for which there was no inspection of that ballot at the time it was entered in the vote.” He noted that all of these ballots were cast by mail.

He noted that Democrats at some polling places blocked election inspectors from access, violating standards used around the world.

“Even Tanzania and places that you wouldn’t think of had rules about inspectors,” Giuliani said.

Republican inspectors saying they were denied access filed affidavits and “swore under penalty of perjury. That’s something no Democrat has ever done,” he said.

Giuliani said media outlets were wrong to report there was no evidence of voter fraud or irregularities.

“It’s your job to read these things and not falsely report that there’s no evidence,” he said. “You should have had the time and energy to go look for them. That’s your job.”

He said that in Michigan, for example, the campaign has 100 affidavits alleging voting irregularities.

Also Thursday, the campaign announced it was withdrawing its lawsuit in Michigan.

Giuliani said the move came “as a direct result of achieving the relief we sought: to stop the election in Wayne County from being prematurely certified before residents can be assured that every legal vote has been counted and every illegal vote has not been counted.”

He was referring to two GOP elections officials who rescinded their certification of the Wayne County ballots, saying they were subjected to abuse and lied to on the night they agreed to certify the vote totals.

David Fink, a lawyer for the city of Detroit, told CNBC the wishes of the two Republicans have no validity and that the count will stand.

Keating Says He Confronted Maskless Troop, But Didn’t Cause Relocation