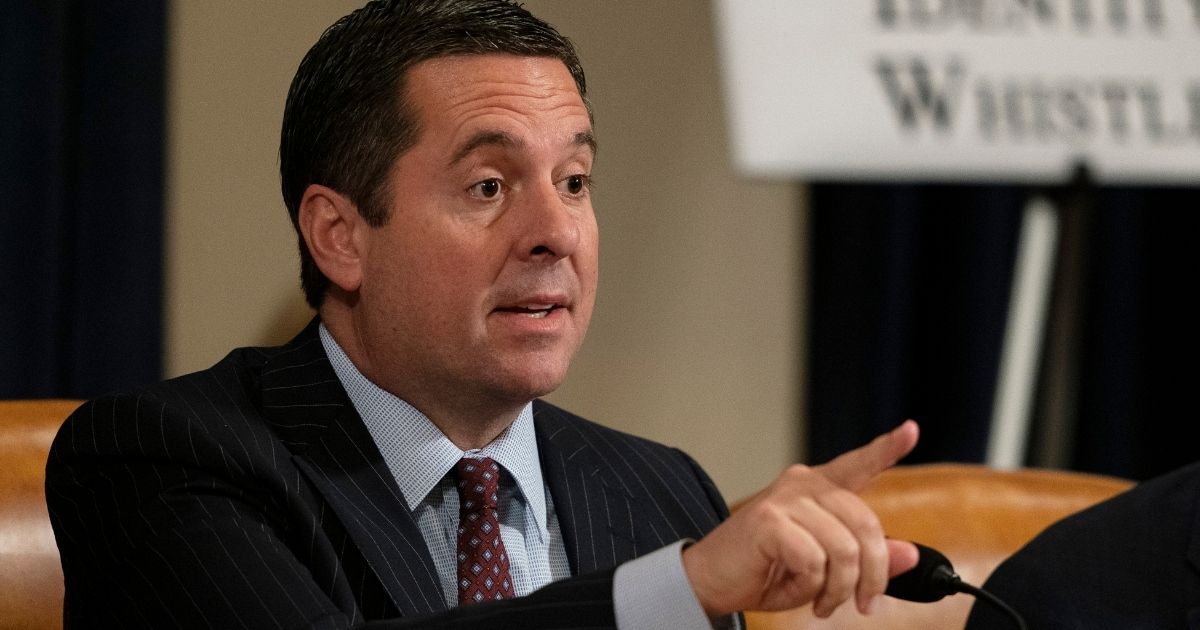 President Donald Trump awarded Rep. Devin Nunes of California with the Presidential Medal of Freedom on Monday, and deservedly so.

Nunes, now the ranking Republican on the House Select Committee on Intelligence, was the chairman the committee for the first two years of Trump presidency, when he began to unearth the truth behind what took place during the 2016 presidential campaign.

The White House statement announcing the award for Nunes reads, in part: “In 2017, Congressman Nunes launched an investigation into the Obama-Biden administration’s misconduct during the 2016 election – and began to unearth the crime of the century.

“As a result of his work, he discovered that the infamous Steele Dossier was funded by the Clinton campaign and the Democratic National Committee,” the statement continued.

“He found that a senior Justice Department attorney was married to one of the architects of the document. He learned that the Obama-Biden administration had issued Foreign Intelligence Surveillance Act (FISA) warrants to spy on President Trump’s campaign and illegitimately unmasked several innocent spying victims for political gain.”

The White House went on to say, “Devin Nunes’ courageous actions helped thwart a plot to take down a sitting United States president.”

The statement highlighted that Nunes’ investigation resulted in over a dozen FBI and Department of Justice officials being fired, demoted, or forced to resign.

Do you think Devin Nunes deserves the Presidential Medal of Freedom?

Certainly, two who fit in the first category would be the notorious former FBI agent Peter Strzok and former Deputy FBI Director Andrew McCabe, though a report by DOJ’s own inspector general also played a significant part in their removal.

The “insurance policy” was the Russia probe, as The Wall Street Journal reported.

Two days after he sent those texts about the briefing practice sessions, Peter Strzok sent his scandalous “insurance policy” text to his lover Lisa Page. pic.twitter.com/SMlgoCeAQL

The White House Medal of Freedom statement also commended Nunes for his courage in not backing down while he sought the truth regarding allegations that the Trump campaign colluded with Russia during the 2016 campaign.

“Congressman Nunes pursued the Russia Hoax at great personal risk and never stopped standing up for the truth,” the White House said.

“He had the fortitude to take on the media, the FBI, the Intelligence Community, the Democrat Party, foreign spies, and the full power of the Deep State,” the statement continued.

“Devin paid a price for his courage. The media smeared him and liberal activists opened a frivolous and unjustified ethics investigation, dragging his name through the mud for eight long months. Two dozen members of his family received threatening phone calls – including his 98 year old grandmother.”

The White House concluded, “He uncovered the greatest scandal in American history.”

One courageous act Nunes took was to greenlight House Intelligence Committee senior counsel Kash Patel to issue bank subpoenas regarding who funded the Steele dossier, as chronicled in the political documentary, “The Plot Against the President.”

The film is based on journalist Lee Smith’s bestselling book, “The Plot Against the President: The True Story of How Congressman Devin Nunes Uncovered the Biggest Political Scandal in U.S. History.”

“Through our investigative process we found out that a firm representing Christopher Steele, Fusion GPS, was somehow involved in the matter,” Patel said in the film.

“Fusion GPS forced us into federal court, into litigation over the subpoena itself, and that was when we everybody was like, ‘we’re on to something,’” he recounted.

Patel also learned that Nellie Ohr, wife of then-senior DOJ official Bruce Ohr (since demoted), was paid by the opposition research firm Fusion GPS to dig up dirt on Trump.

She then acted as a conduit to the FBI through her husband.

And perhaps the biggest discovery of all was that Hillary Clinton’s campaign and the Democratic National Committee paid for the dossier through the Washington-based law firm Perkins Coie.

“So now you’ve connected the money and the people and put the political party right in the middle of your opponent,” Patel said in the movie. “It’s outrageous.”

Amanda Milius, a former Trump administration State Department official and director of “Plot Against the President” told The Western Journal in an interview last summer, Russiagate is “essentially Watergate reversed.”

Instead of the president and his associates being guilty of wrongdoing, it was those within the Department of Justice and intelligence community who foisted Russiagate on the country.

The political scandal is “so, so, so much bigger” Milius argued.

Nunes is well-deserving of the Medal of Freedom.

He is a modern-day profile in courage for taking on the “deep state” and exposing the truth.