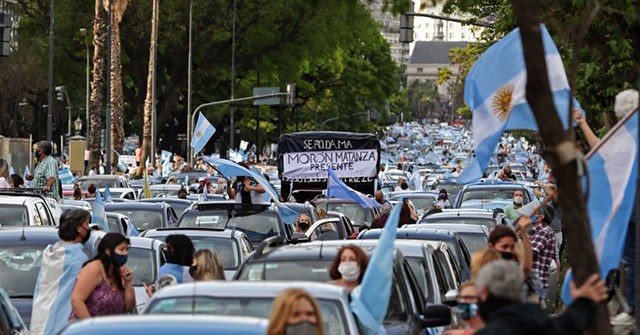 Anti-socialist demonstrations took place across Argentina this weekend against the administration of socialist President Alberto Fernández, whose management has led to a severe economic crisis.

The largest protest took place in Buenos Aires, where thousands of people surrounded the obelisk in the central square shouting “freedom, justice, and the constitution.” Drivers honked their horns in support, while inflatable dolls of Fernández and Vice President Cristina Fernández de Kirchner were on full display. Inflatable dolls of politicians wearing prison uniforms, known as pixulecos, originated in neighboring Brazil, where protests attracting millions preceded the impeachment and removal of socialist ex-President Dilma Rousseff in 2016.

One of the principal concerns of those in attendance is the state of the country’s struggling economy, currently in the midst of another hyperinflation crisis fueling soaring rates of unemployment. With prices rising on almost a daily basis and the government restricting citizens’ access to U.S. dollars, many Argentines are cashing in their life savings at black-market prices just to ensure they do not lose everything.

Another concern prompting the protests is the alleged plan the government has to purchase 10 million doses of Russian manufactured coronavirus vaccine candidates, despite many experts expressing doubt over both the safety and efficacy of the product.

Protesters also opposed the government’s plans to introduce judicial reforms that will protect Fernández de Kirchner, herself a former president, from future prosecution in the yet-unresolved case of prosecutor Alberto Nisman, found dead of an alleged “suicide” in January 2015. Nisman was to testify before Congress the day after his death that he had evidence Fernández de Kirchner protected those responsible for the 1994 bombing of the Argentine-Israeli Mutual Association (AMIA) in Buenos Aires, including both Iranian officials and ties to Hezbollah. Police found a draft warrant for Fernández de Kirchner in Nisman’s trash following his death. No one has been arrested or prosecuted in relation to the Nisman case at press time.

These are the second nationwide demonstrations held within the space of a month. Similar protests occurred last month over issues including the government’s draconian lockdown measures imposed in response to the Chinese coronavirus. Despite the strict measures, the country has recorded over 1.2 million coronavirus cases, the second-highest figure in Latin America and the seventh-highest worldwide. As governments self-report coronavirus cases, these rankings are skewed by rogue states such as China, Russia, Venezuela, and Iran posting numbers that experts — including experts in these countries — have questioned.

Leftists protests also took place this weekend against the eviction of largely homeless families and squatters living in improvised shacks at the Guernica encampment in the outskirts of Buenos Aires.

According to the Buenos Aires Times, some 4,000 police officers were deployed to storm the area in the early hours of the morning, “tearing down the shacks and miserable refuges of wood and plastic which were then set ablaze in scenes that sparked panic and fury among the temporary residents.”

“The evicted resisted the raid with stones and other projectiles while the police fired back with rubber bullets and tear gas in clashes lasting several hours,” the Times added.

Tensions have risen across Argentina since December last year when Fernández won the presidential elections over the incumbent president Mauricio Macri. With the collapsing economy and increasing social unrest, some commentators have speculated that the country may be going in the same direction as socialist Venezuela, currently experiencing the worst humanitarian crisis in its history.