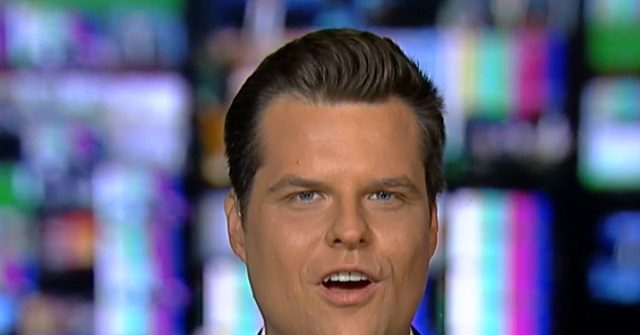 Gaetz pointed to the unlikely demographic of recently registered voters and potential flaws in voting systems manufactured by Dominion to bolster his claim.

“Here’s what we know: The chairman of the Federal Election Commission said there was fraud in this election, and when you take the mail-in ballots and balance them against the registry of people who changed their addresses, you see there are tens of thousands of people, 17,000 alone in Georgia who actually moved and then voted in the state that that they moved from,” he said. “You know, Reince mentioned these nursing home mystery votes coming in, and the state of Pennsylvania, more people over the age of 90, registered to vote in 2020 than in like the prior four years combined. I call it the Dorothy effect, this notion that there was an immediate interest and surge of voters over the age of 90 during a pandemic. We have yet to find one nursing home where these Democratic registrations were occurring in mass that seems to suggest that those ballots may have been turned in by someone other than the person they were addressed to.”

“Now, this isn’t impossible to fix. In Florida, we have a standard that requires a review of those mail-in ballots before Election Day. That way, you’re able to give them greater scrutiny and ensure a proper scrutiny. But here’s one thing I know, Sean, those Dominion software systems, they changed more votes than Vladimir Putin ever did, and we spent four years and tens of millions of dollars over this fiction of Russian collusion with a Trump campaign. I’d say a few more weeks ensuring we had a fair election in 2020 is worth this great nation’s time.”

Facebook 4Q results soar, in prelude to an uncertain 2021

Incompetent government led to a lot of unnecessary deaths from COVID,...