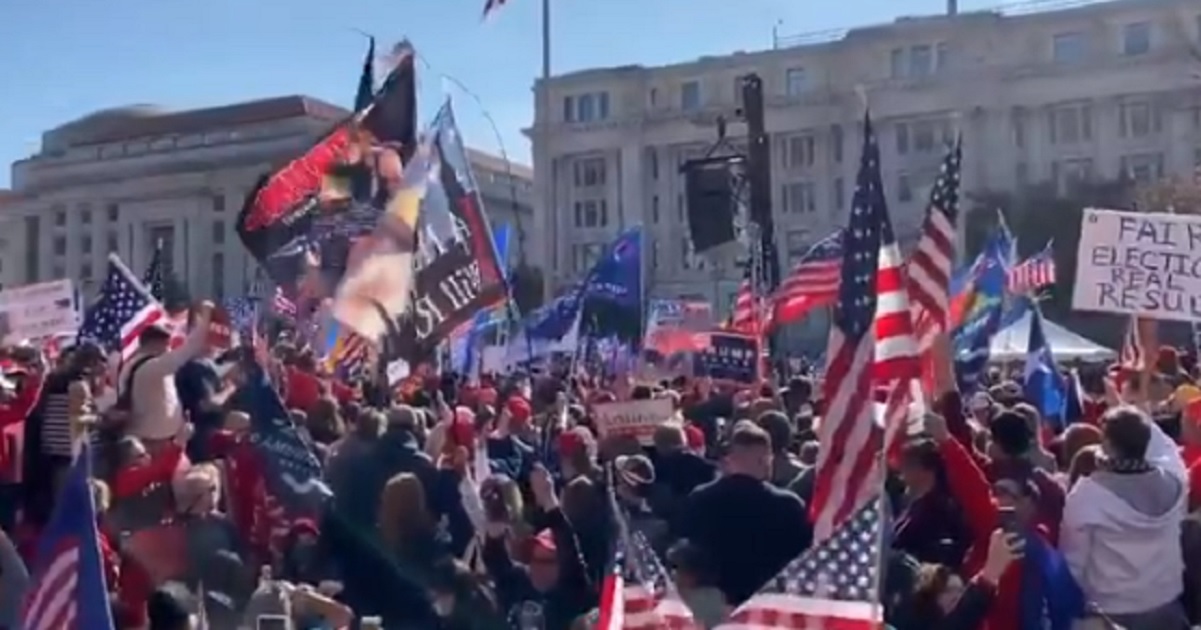 To Hillary Clinton, they were the “deplorables.”

But to the thousands of Trump backers gathered in Washington on Saturday in what could be the sunset days of President Donald Trump’s era in the White House, they were patriots making a stand for all they held dear.

At one point, the patriotism that was almost tangible in the Million MAGA March overflowed into a spontaneous rendition of “The Star Spangled Banner.”

Yesterday, I stood with patriots from all over this great nation at the #MillionMAGAMarch to support our President and fight for a FAIR election!

The Trump Law and Order flag is brought over Black Lives Matter Plaza as supporters cheer on the police here in DC #MillionMAGAMarch #DC #MarchForTrump pic.twitter.com/1t4g3UrL3g

Trump recognized the spirit of his followers by paying a drive-by visit with the marchers on Saturday.

Marcher Jerry Babb saw more than a sea of angry Americans looked down upon by liberals as he participated in the event.

“America is beautiful,” Babb said, according to The Guardian. “And America is back.”

A common theme among the marchers was that the election, which results so far say is strongly tilting toward making Democrat Joe Biden the next president, is tainted by suspicious behavior in Democratic-run areas of the country.

“I haven’t slept much since the election because I’m sad that Donald Trump is not our president. He’s gonna be our president, though,” Craig Johnson, who drove 14 hours from Florida to show his support for Trump, told The Guardian.

Indiana Stevan Roknic told The Guardian he was not going to meekly accept the notion that the election was fair.

Do you think the Nov. 3 election was fair?

“Trump was winning, he had the election in a landslide,” he told the newspaper. “And then in the middle of the night they stopped doing the count, and mysteriously all these votes showed up for Joe Biden. I don’t buy it.”

The march included Americans of all races, despite liberal attempts to paint Trump and his followers as supporting “white supremacy.”

“I absolutely love Trump and what he’s done for this country, and he got robbed from four more years,” she said.