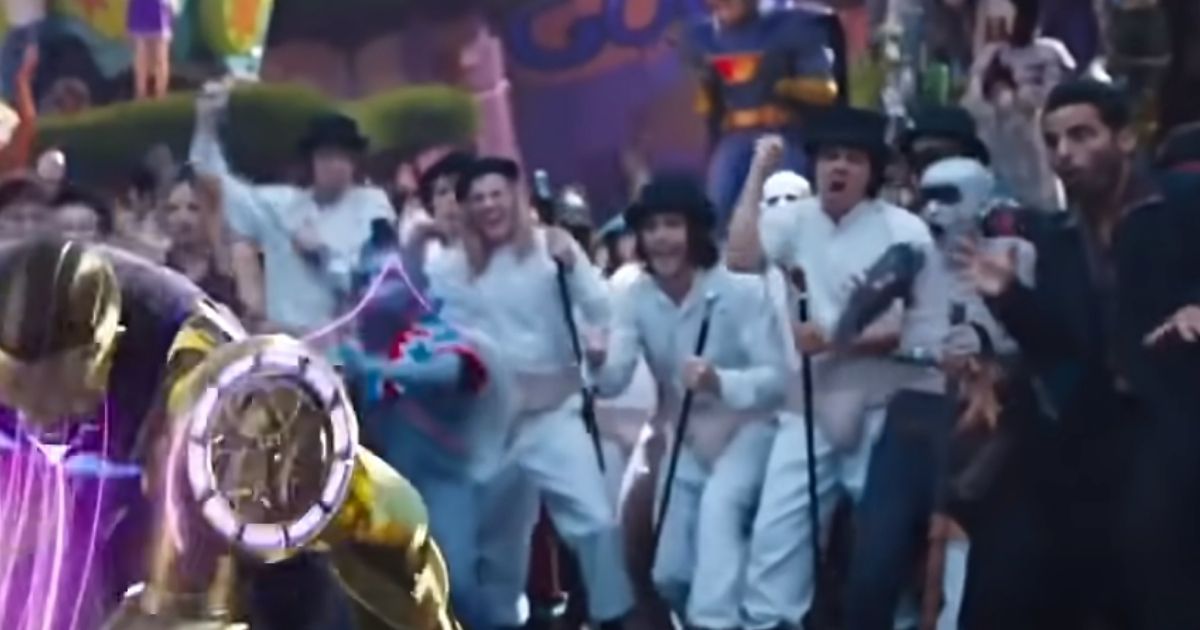 Adult fans of the “Space Jam” franchise — they exist, and I never want to meet them — are worked up into a digital lather about the trailer for “Space Jam 2: A New Legacy” because LeBron James’ fictional cartoon team is too strong.

I don’t remember much about the original 1996 cartoon/live animation hybrid movie, but here’s what I can recall: Michael Jordan, along with a bunch of Looney Tunes characters and Bill Murray, were able to beat a team of monsters who had taken over the bodies of NBA superstars such as Charles Barkley and Patrick Ewing.

Thus, Looney Tunes-land (or whatever) was saved, Michael Jordan went on to win three more NBA titles, Bill Murray had a career renaissance with better movies such as “Lost in Translation” and everyone lived happily ever after.

In “Space Jam 2,” star LeBron James apparently wants a deeper bench that doesn’t include Porky Pig or Marvin the Martian:

TRENDING: Watch: Bidens Neglect to Say ‘Jesus’ During Easter Message, Use It to Push Vaccine

Superman is a high lottery pick in any NBA draft, but Gandalf’s age might scare off a few GMs.

Anyhow, this is apparently a thing, as if the legacy of the animated franchise James is assembling might taint itself by attracting too many high-priced free agents.

Also, judging by the trailer, that’s not what happens in the movie — but apparently, this is one of the things our global village needed to be concerned about after the trailer was released last week.

Should Pepe Le Pew have been cut from the new “Space Jam” movie?

Then again, one of the themes of the trailer for this summer’s sequel to the 1996 original was trying to fill the screen with as many recognizable characters as possible.

Remember the pop-culture sugar-rush overload that was “The Lego Movie?” That looks like a quaint little off-Broadway production if one is to judge by the trailer for “Space Jam 2,” which resembles nothing so much as a pile-up on an icy freeway consisting of several dozen clown cars stuffed with Warner Brothers properties. Yogi Bear. The Flintstones. The Iron Giant. King Kong. The Scooby-Doo gang.

One that you won’t see in there is Pepe Le Pew, the Looney Tunes skunk known for showering often-unwanted amorous attention on females. According to Deadline, the decision to remove Pepe was made after New York Times columnist Charles Blow said the character “normalized rape culture” in an Op-Ed piece in early March. He followed it up with this tweet on March 6:

This helped teach boys that “no” didn’t really mean no, that it was a part of “the game”, the starting line of a power struggle. It taught overcoming a woman’s strenuous, even physical objections, was normal, adorable, funny. They didn’t even give the woman the ability to SPEAK.

Deadline reported on March 7 that “a hybrid live-action animation scene between ‘Jane the Virgin’ actress Greice Santo and Pepe Le Pew, shot back in June 2019 for Space Jam 2 was left on the cutting room floor.”

“The Pepe Le Pew character will likely be a thing of the past across all media,” it said. “Warner Bros. also has no current TV series featuring the skunk and there are no plans to have him appear on ‘Looney Toons,’ ‘Bugs Bunny Builders,’ ‘Tiny Toons Looniversary’ or future projects, sources confirmed to Deadline.”

So, no skunk character whose unwanted come-ons could be interpreted as “normalizing rape culture.”

Kept in the movie, however? Characters who actually rape people:

Warner Bros. won’t #RestoreTheSnyderVerse, but will put 4 literal rapists in the new “Space Jam” movie? These men rape and beat people for fun in Stanley Kubrick’s “A Clockwork Orange” (1971).

But Pepe La Pew can’t be in the new movie.

The characters seen with front-row seats here are from Stanley Kubrick’s 1971 film adaptation of “A Clockwork Orange,” which was a controversial film at release and remains so today.

In one of the first scenes, the film’s anti-hero, Alex, rapes the wife of a writer he and his gang have just crippled, all while belting out “Singin’ in the Rain.” The characters presented here view “ultra-violence” — rape, mayhem, petty theft, whatever — as a reasonable hobby.

Whether the over-the-top rape and violence in the dystopian film make a salient artistic point to justify their being there is a matter of interpretation. For film critic Roger Ebert, they didn’t.

“Alex is violent because it is necessary for him to be violent in order for this movie to entertain in the way Kubrick intends. Alex has been made into a sadistic rapist not by society, not by his parents, not by the police state, not by centralization and not by creeping fascism — but by the producer, director and writer of this film, Stanley Kubrick,” Ebert wrote.

“Directors sometimes get sanctimonious and talk about their creations in the third person, as if society had really created Alex. But this makes their direction into a sort of cinematic automatic writing. No, I think Kubrick is being too modest: Alex is all his.”

Even critics who praised the movie found the content — and the anti-heroes — decidedly nauseating. Gene Siskel, writing about the movie in the days before he was linked with Ebert, gave it four stars but said the content was meant to raise the question, “Is a scientifically induced peace any more attractive than animalistic warfare?”

“To make their case in the strongest way, author [Anthony] Burgess and screenwriter Kubrick picked a thoroughly detestable young man as the establishment’s victim. For, if we can pity rotten Alex’s loss of freedom, maybe then we can learn to value our own.”

But again, to make this case in the strongest way, this isn’t a character that should be hanging around a kids film — especially not one where Pepe Le Pew got the ax because the skunk was a bit handsy.

Even though this controversy has been percolating for a few days, the trailer hasn’t been changed.

Unlike Pepe, Alex and his “droogs” aren’t on the cutting room floor. Actual rapists are perfectly OK, so long as The New York Times isn’t publishing any think pieces about them.

Here’s how warped Hollywood’s values are: When it was released half a century ago, “A Clockwork Orange” was shocking and divisive, and it remains so. Pepe Le Pew was mostly fine until last month, when highbrow troll Charles Blow decided the cartoon character was a gateway to “rape culture.” The former property stayed in.

At least we can be thankful Warner Brothers doesn’t have the rights to “Silence of the Lambs.” I’d hate to have to explain to my kids who that guy on the cart is and why they have to keep a mask on him.

I feel bad for LeBron James, though; if he really wants to assemble that dream team of intellectual property, I hear Dr. Lecter is killer in the paint.