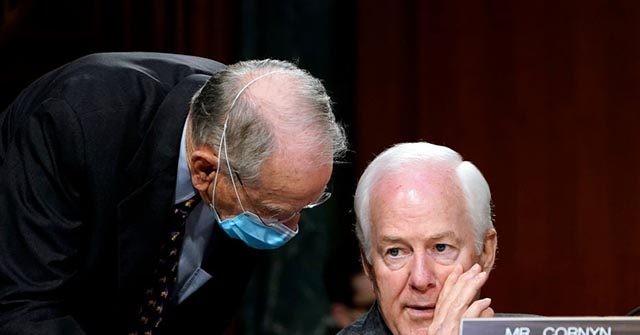 A couple of Senate Republicans are hinting at a potential deal with Democrat Joe Biden, should he assume office in January 2021, on the issue of immigration — a move that could include an amnesty for 11 to 22 million illegal aliens living in the United States.

In interviews with the Hill, Sens. John Cornyn (R-TX) and Chuck Grassley (R-IA) suggested that a deal could be struck between Democrats, Republicans, and a potential Biden White House on the nation’s illegal and legal immigration system.

“I think that would be a good thing to do,” Sen. John Cornyn (R-Texas) said about the potential to do immigration next year. [Emphasis added]

“The challenge is you’ve got to get the votes, but that to me is one of my biggest disappointments in my time in the Senate, our inability to get that done,” Cornyn said, adding that he would “try to be part of that effort” if the topic comes back up. [Emphasis added]

Grassley said such a deal would need to be “somewhere in between” the vocal open-borders wing of the Democrat Party and the immigration reformers of the Republican Party. A middle ground, as previous deals highlighted, generally includes some form of amnesty for illegal aliens.

Already, those aligned to President Trump’s “America First” coalition — which includes more than 72 million Americans — have rebuked discussion from Senate Republicans about striking a deal on immigration with Biden.

Days after the November 3 presidential election, Sen. Lindsey Graham (R-SC) was met with sharp criticism from immigration reform organizations and grassroots conservatives for suggesting that the GOP could reach a “common ground” with Biden on some form of amnesty.

Fox News Channel’s Tucker Carlson called out Graham in a segment, saying that the newly reelected senator “would be happy to sell out his voters with an amnesty deal, like within hours of the election.”

Currently, there about 24.5 million Americans are either jobless or underemployed but all want full-time jobs. Those unemployed are forced to compete in the labor market by an endless stream of foreign workers who secure visas and green cards which rack up to more than 2.5 million admissions every year.

Exit polling after the election reveals that voters across party and racial lines overwhelmingly want less overall immigration to the U.S. More than 3-in-4 voters, for instance, said it is important to reduce immigration with continued high unemployment and more than 62 percent said, even after unemployment has leveled off, immigration should remain lower than its current levels.

ABOUT US
Contact us: [email protected]kehistory.com
© 2021 - Patriots Make History - All Rights Reserved.