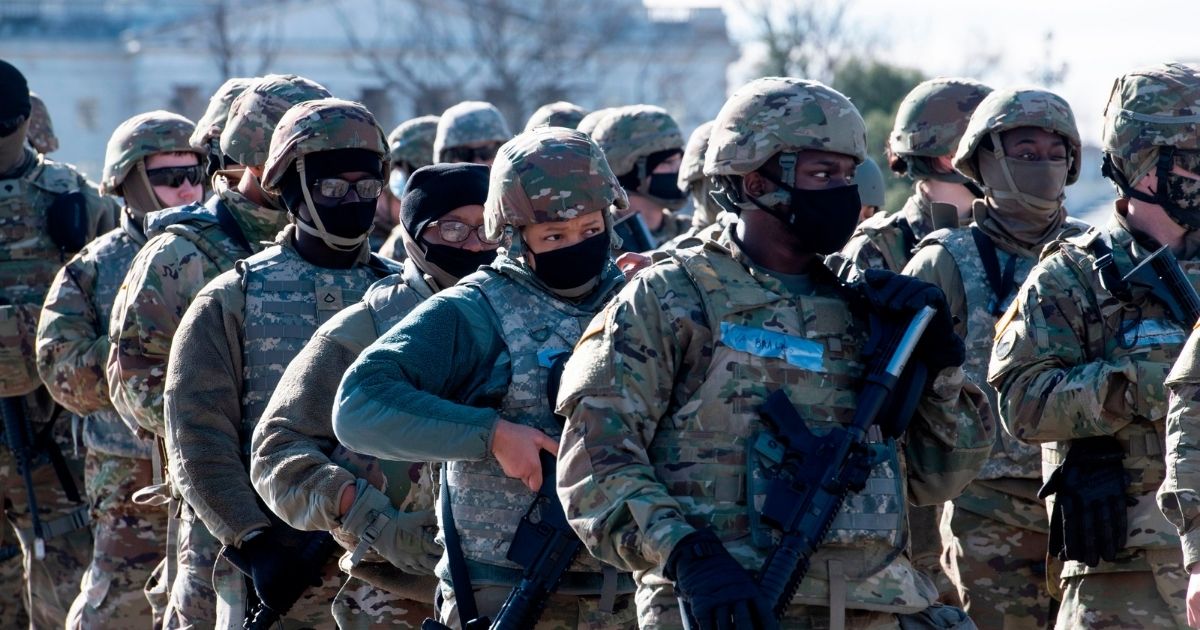 Rod Lamkey – Pool – AFP / Getty ImagesMembers of the National Guard arrive as the U.S. Capitol goes into lockdown after an “external security threat” prior to a dress rehearsal for the 59th inaugural ceremony for President-elect Joe Biden and Vice President-elect Kamala Harris in Washington, D.C., on Monday. (Rod Lamkey – Pool – AFP / Getty Images)

The massive presence of National Guard troops in preparation for President-elect Joe Biden’s inauguration has left many people feeling unsettled.

A video from Politico national security correspondent Natasha Bertrand showed dozens of troops walking in formation on the streets of Washington, D.C., on Sunday evening.

This unprecedented number of troops is intended to protect against threats following the Capitol incursion that occurred on Jan. 6 and resulted in the death of 5 people.

Currently, there are about 25,000 guardsmen who will be present for the inauguration from all 50 states, according to the National Guard website.

The visuals coming out of Washington look eerily similar to authoritarian regimes like North Korea, which are notorious for their military parades.

The National Guard deserves all the thanks in the world for their efforts, but one cannot help but wonder why their presence is so massive.

A possible answer is disturbing: The United States military is preparing for the absolute worst-case scenario for Wednesday.

As there are also concerns about an inside attack, the FBI is vetting all the troops currently in Washington, The Associated Press reported Sunday.

Defense officials tell AP they fear possible inside attack at inauguration and are having National Guard troops in DC vetted. https://t.co/8CMrpw8DlK

“If there’s any indication that any of our soldiers or airmen are expressing things that are extremist views, it’s either handed over to law enforcement or dealt with the chain of command immediately,” National Guard Bureau Chief Gen. Daniel R. Hokanson told the AP.

A fire at a homeless encampment was mistaken for a larger threat Monday morning, triggering another lockdown at the Capitol during the inauguration rehearsal.

RELATED: Young Not Stupid: Biden’s Inauguration Gives Us a Preview of Who Is Back in the White House

“Here’s video of National Guard troops running a few moments ago after the Capitol was locked down due to a security threat,” Michaelson tweeted.

“It appears that the ‘threat’ was actually a fire several blocks. Thankfully, there is no ongoing threat.”

#BREaKING Here’s video of National Guard troops running a few moments ago after the Capitol was locked down due to a security threat.

It appears that the “threat” was actually a fire several blocks. Thankfully, there is no ongoing threat. pic.twitter.com/2XVbManHaE

The historic situation makes it clear that polarization and domestic terrorism pose a significant physical threat to a peaceful transition of power, and that the political climate needs to cool down.