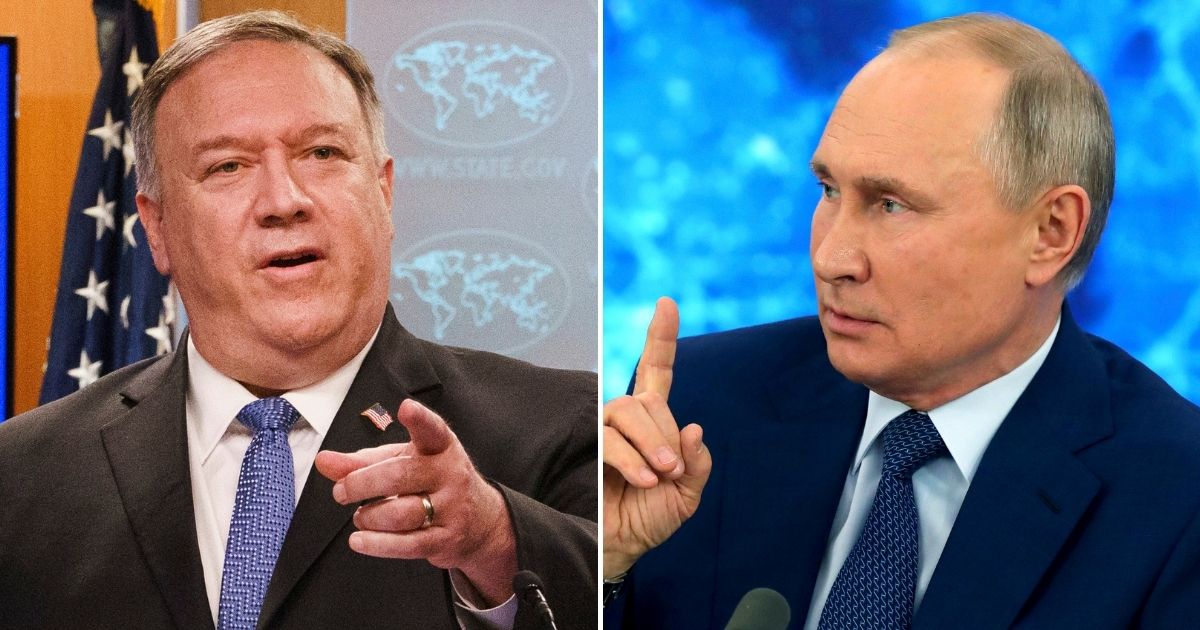 Secretary of State Mike Pompeo said Friday he believes Russia was behind a coordinated massive cyberattack and data breach that targeted a number of federal agencies this year.

During an interview with conservative radio host Mark Levin, Pompeo pointed the finger in the direction of Moscow when talking about the massive hack of government systems, which only recently came to light. The exact scale of the attack is still unknown, but Pompeo signaled he has a good idea of where it originated.

“This was a very significant effort, and I think it’s the case that now we can say pretty clearly that it was the Russians that engaged in this activity,” Pompeo told Levin.

“I can’t say much more as we’re still unpacking precisely what it is, and I’m sure some of it will remain classified,” Pompeo also said.

“Suffice it to say, there was a significant effort to use a piece of third-party software to essentially embed code inside of U.S. government systems and it now appears systems of private companies and companies and governments across the world as well,” he added.

Fox News reported Pompeo was the first Trump administration official to link the cyberattack to the Kremlin.

The sophisticated and historic cyberattack against federal agencies could have begun as early as March of this year, according to The Hill. The Department of Energy’s National Nuclear Security Administration was compromised, as was the Department of Homeland Security, the Treasury Department and the State Department.

As many as 18,000 customers of the private software company SolarWinds might have also been targeted, The Hill reported. SolarWinds software could have been used by hackers to infiltrate various computer networks.

Microsoft announced at least 40 government agencies or other entities were breached. Companies and agencies targeted were in the U.S., Canada, Mexico, Belgium, Israel, Spain, the United Kingdom and the United Arab Emirates, Fox reported.

Do you think the U.S. should retaliate against those behind the cyberattack?

Former Obama administration cybersecurity commission member Tom Kellermann told The Hill the hack is likely the biggest of its kind ever perpetrated against the U.S.

“This is the most significant cyberattack in the history of the United States,” Kellermann said. “It’s unprecedented in the 22 years I’ve been in the business.”

Department of Energy spokeswoman Shaylyn Hynes told Fox News that her agency worked quickly to ensure that systems compromised by hackers did not affect the department’s mission.

“At this point, the investigation has found that the malware has been isolated to business networks only, and has not impacted the mission-essential national security functions of the Department, including the National Nuclear Security Administration (NNSA),” Hynes said.

“When DOE identified vulnerable software, immediate action was taken to mitigate the risk, and all software identified as being vulnerable to this attack was disconnected from the DOE network,” she added.

The Associated Press reported the motive for the hack was not immediately clear.

Citing experts with knowledge of the breach, the AP reported hackers could have sought sophisticated blueprints for “advanced weaponry, COVID-19 vaccine-related research and information for dossiers on government and industry leaders.”

Russia has denied any involvement in the cyberattack.

No, Palm Beach International Airport will not be re-named after Donald Trump

No, Palm Beach International Airport will not be re-named after Donald...

House Submits Impeachment Article to Senate; Trial to Begin in 2...