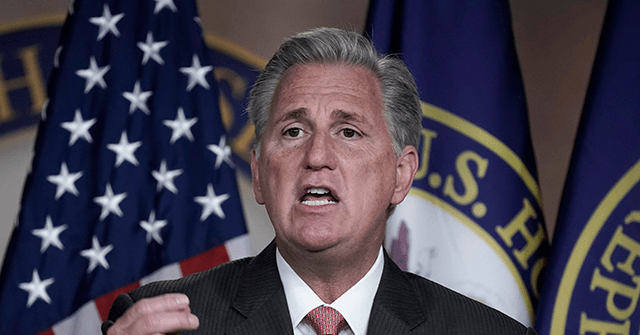 Saturday, during an appearance of FNC’s “Justice,” House Minority Leader Kevin McCarthy (R-CA) evaluated the early decisions made by President Joe Biden and his administration.

The California Republican described the moves as beneficial to two adversarial world powers, China and Russia.

“You just look at the first week of this administration,” he said. “It’s Russia, China, our adversaries who are benefiting, not the American people. You’re right that it’s America last, but he’s now put China first. Remember, this is the same group that called you, me, and your viewers, deplorables. Now they think we have to be reprogrammed. The idea that he cut union jobs with Keystone Pipeline and hurt our greatest ally within Canada. But then he’s gone even further. The Paris Accord only benefits China. We’ve lowered more emissions in any country. You could add up all Europe together.”

“And then, he goes forward with the movement of not making new American jobs,” McCarthy continued. “Remember what he said just less than a week ago about unity. None of those actions have taken place. I’ll tell you what would unify this nation is exactly what we’re working on the Republicans in Congress, to get Americans back to work, not 11 million new illegal immigrant having citizenship. What about those 10.7 million Americans who need a job? Or what about getting our kids back in school? Or getting the vaccine efficiently to every American who wants it?”

“His big program when he was campaigning, on day one, he was going to be prepared for COVID,” he added. “What can he tell us? He can do nothing else. What is his biggest goal? It is actually what the last administration is going to do, a million vaccines a day for the first 100 days and he thinks that is something he is doing.”

Trump Can’t Be the Republican Nominee in 2024 — He Cost GOP Senate, White House