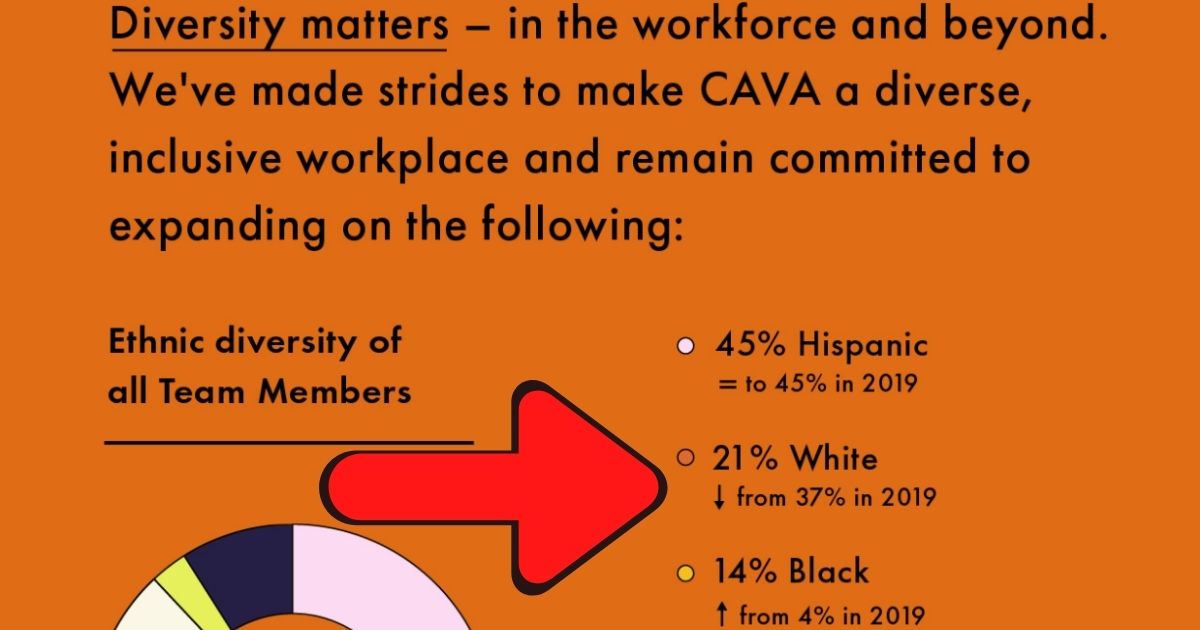 A restaurant chain’s obvious effort to score points with progressives is leaving a bad taste in everyone’s mouth.

In a Jan. 1 Twitter post, the Rockville, Maryland-based CAVA Group apparently decided that bragging about a drop in the percentage of white employees at corporate headquarters was a great way to ring in the New Year.

Judging by the reaction on Twitter, though, it was a disaster.

The tweet couched its information with a saccharine caption no one could disagree with. Clearly addressed to its customers, it stated:

“Your continued support has helped us make strides to better our organization and the communities we serve. In such a challenging year, we couldn’t have achieved any of it without you. We look forward to continuing this work and welcoming you to our table in 2021.”

Your continued support has helped us make strides to better our organization and the communities we serve. In such a challenging year, we couldn’t have achieved any of it without you. We look forward to continuing this work and welcoming you to our table in 2021. pic.twitter.com/JBBdy2ats1

Well, CAVA might welcome you to the table if you’re white (and a paying customer), but judging by the caption and its implication, it might not be so welcoming when it comes to employment at the corporate headquarters.

The post includes a graphic of what the company says are the percentages of its employees broken down by race, both at the headquarters level and in the chain’s locations nationwide.

Founded in 2006, according to the Washington Business Journal, Cava Group purchased the Texas-based Zoe’s Kitchen restaurant chain in 2019, taking the company from managing 75 CAVA Grill restaurants to a combined 330 restaurants, according to a CNBC report from April 2019.

That a company in the United States of America in 2021 would even think of posting its employee breakdown by race as a PR ploy is bad enough — understandable in a race-obsessed environment created by a combination of progressive politics and pure street thuggishness, but still deplorable.

The suggestion from the tweet’s caption that racial makeup of a company’s workforce is an automatic indicator of what makes it a company a “better” organization is simply repugnant.

Imagine a company extolling their goal of fewer minority hires. Yeah, you’d be getting a visit from the Labor Board. pic.twitter.com/6AeJo7voRh

At the headquarters level, while the percentage of Hispanic employees remained unchanged, the percentages of Black, “Native Hawaiian/Other Pacific,” Asian and even just “Other” employees all have an upward arrow with the increase over their percentage in 2019.

The percentage of white employees, though, had dropped by 16 percent from 2019 — from 37 percent to 21 percent in the space of a year.

RELATED: Will Don Lemon Be Canceled for What Was Just Spotted Behind Him During CNN Segment?

To be fair, there could be any number of reasons behind the numbers — corporate headquarter staffs are considerably smaller than field staffs, for obvious reasons. The turnover of just a few positions that happen to have been held by white people being taken over by employees of other races — or even “Other” races — could be a matter of chance more than any deliberate hiring policy.

Likewise, newly created positions could have been filled by black people, Asian people or “Others” without any harm to anyone. The Western Journal reached out to CAVA for comment, but did not receive a reply before publication.

What’s unmistakable, though, is how this went over with the public.

Whatever reception CAVA’s suits might have been hoping for, an almost universally negative response, and a good deal of it brutal, couldn’t have been it.

Seems you’ve jumped the shark. Never heard of you until today, but I’ll remember. #donoteathere #wokeclowns

Imagine being so Woke you think diversity is defined by how people look, not by life experience, skills, mind & heart.https://t.co/bH2ziw6Q2E

You made a chart, uploaded it and posted it online for the world to see and not once did it occur to that this is racism? Wow, you are beyond help.

It’s important to point out here that Twitter is a medium liberals love. The fact that there were virtually no comments supporting the tweet’s implication is a pretty good indication that even the apparent target audience was turned off by it.

But there’s a bigger lesson here than a botched PR gimmick.

No corporation that wants to stay in business sets out to deliberately make itself look bad to the public.

The executives at CAVA — or whoever approved this post– obviously thought it was a self-evident good that a company would have fewer employees of a given race one year over a previous year.

In this case, the disfavored race is white, and someone at CAVA — probably several someones at CAVA — decided it was a selling point to tell the public the company has fewer white employees now than in 2019.

It’s a public statement that would be inconceivable when talking about any other group.

If any other race were so described, its members would be in the streets protesting. The mainstream media focus would be intense. The “squad” would be squawking. “The Rev.” Al Sharpton would be out front with one hand on a bullhorn, the other out waiting for the payoff to make it all go away.

But when it comes to white people, it’s not only acceptable in certain quarters to have fewer of them in a company’s workforce, but a large company that depends entirely on the public’s goodwill to stay in business apparently thought it was something to brag about.

That’s a sad comment on both the company and the country.

CAVA’s executives must have thought they had a great idea to start the new year. The aftertaste must be awful.