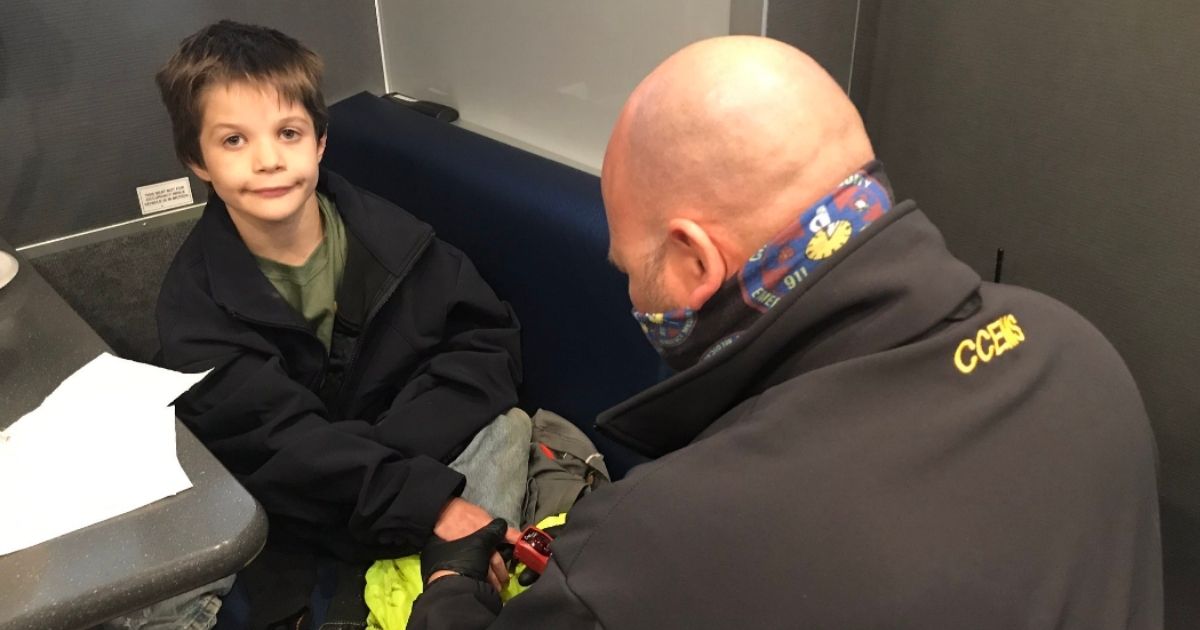 Jordan was living with foster parents and two of his siblings in Cheatham County, Tennessee, when he went missing after a disagreement in the home. The area around the home was heavily wooded, and with winter coming the night temperatures were dropping dangerously low.

“Endangered Child Alert,” the Tennessee Bureau of Investigation tweeted on Nov. 15. “A statewide ECA has been issued for 9-year-old Jordan Allen Gorman, out of Cheatham County. Jordan was last seen at his Ashland City home, wearing blue jeans and a grey short sleeve T-shirt with red stripes on the arms. Call 1-800-TBI-FIND.”

In a follow-up tweet, they described the boy as “4 feet tall, weighs 75 pounds, has brown hair and brown eyes.”

Jordan’s biological father, Aaron Hatt, told WSMV-TV that the boy also had autism, and when he was younger he was nonverbal. He generally stuck by his older sister’s side, so for him to go missing by himself was especially concerning.

By Monday, they had changed the Endangered Child Alert to an Amber Alert, considering him to be in imminent danger. Temperatures in the 30s and 40s on Sunday and Monday complicated the matter, and Tuesday was forecasted to be cold as well.

For three days, search teams covered the area with no sightings of the boy. One volunteer, a father himself, explained why they searched so hard.

“Think about it in your perspective of, well what if this was my child, and that’s what makes you drive to get out there and find him,” Logan Fryar said. “And ride wood lines and thorns and everything like that just to help that one family because you know how it would be if it was your child.”

On the third day, a team from Kentucky spotted something out of place. At around 3 p.m. on Tuesday, Mathew Reese saw a blue tarp, and then realized it looked like there was something underneath it.

He feared the worst.

“As I got close to the tarp and noticed there was a mass in it, naturally the worst was going through my head initially until the tarp moved and it was just the biggest holy crap, I got him,” Reese recounted. “And it’s exactly what I said on the radio.”

“As soon as I realized he was there, radio backed to these two. Hey, I have him, I have him. Eyes on, hands-on, get up here.”

RELATED: Miracle: Pastor Survives After Being Crushed by Boulder During 800-Mile Hike

#PHOTOS— These pictures from TBI show 9-year-old Jordan Gorman after he was found safe this afternoon, along with the creek bed where he was located, about 3/4 of a mile from his Cheatham County home. Jordan told investigators he found the tarp and built that shelter. pic.twitter.com/jo6gNcbv4k

Jordan had found the tarp and set up a shelter for himself near a creek bed, less than a mile from home. He was very quiet when the rescuers first discovered him, but began to warm up to them.

“Very rare that you have a missing child with this outcome,” Josh Devine, spokesperson for the Tennessee Bureau of Investigation, said.

Many were impressed with the boy’s ingenuity with his makeshift shelter, and Hatt was impressed with his son’s ability to ride out the cold temperatures alone in the woods.

Cold and hungry, but otherwise in pretty good spirits!

“He’s always just been really resilient and an explorer type but to be standing for two days with no jacket no shoes no socks,” Hatt said. “I don’t like going to the living room, let alone outside and walking three-quarters of a mile through the woods with no socks and shoes on, through sticks and rocks I mean it’s just crazy.”

The boy was evaluated and was said to be “cold and hungry, but otherwise in pretty good spirits.” Thanks to all those who showed up to help find him, Jordan is safe and his case is under investigation.