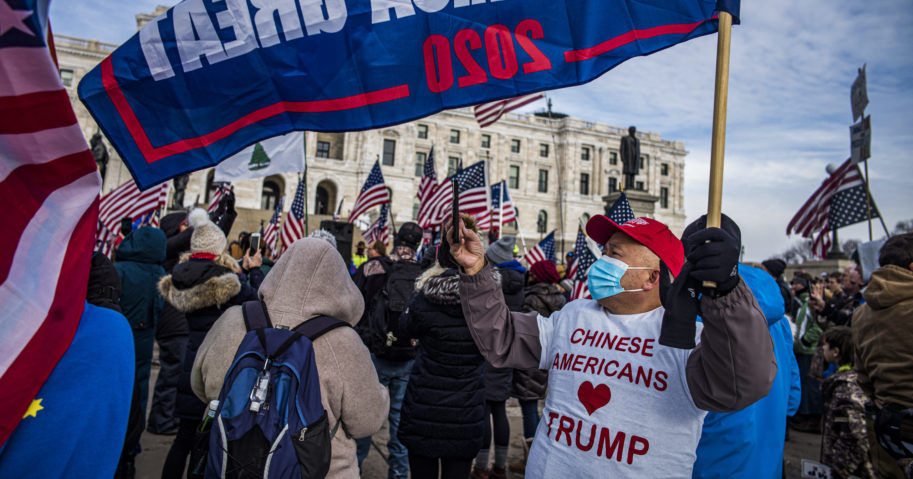 Protesters backing President Donald Trump massed outside statehouses from Georgia to New Mexico on Wednesday, leading some officials to evacuate as a mob stormed the U.S. Capitol.

There were some scuffles, but most demonstrations were peaceful — some of them quite small — and only a few arrests were reported.

New Mexico police evacuated staff as a precaution from a statehouse building that includes the governor’s office and the secretary of state’s office, shortly after hundreds of flag-waving supporters arrived in a vehicle caravan and on horseback.

Demonstrators sang “God Bless America,” honked horns and announced on a megaphone that Trump was the rightful election winner.

Georgia’s secretary of state and his staff evacuated their offices at the Capitol as about 100 protesters gathered outside, some armed with guns.

Republican Secretary of State Brad Raffensperger and his team decided to leave, according to Gabriel Sterling, a top official with Raffensperger’s office.

Republican Gov. Brian Kemp slammed the storming of the U.S. Capitol, calling it “a disgrace and quite honestly un-American.”

Do you support peaceful pro-Trump protesters?

Kemp said he was extending an executive order from the summer, activating the National Guard in case they are needed to protect the state Capitol on Monday when the legislative session begins.

In Washington state, protesters broke through a gate at the governor’s mansion and dozens of people gathered on the lawn. State police said authorities were responding and that Gov. Jay Inslee “and his family are in a safe location.”

Earlier, dozens of people gathered at the state Capitol, demanding a recount of the U.S. presidential election and Washington’s gubernatorial election.

In Utah, the staff of Gov. Spencer Cox was sent home as several hundred people gathered in Salt Lake City.

Salt Lake Tribune photographer Rick Egan said he was pepper-sprayed by a demonstrator. It wasn’t immediately clear if anyone was arrested.

At least one person was arrested at the Oregon Capitol in Salem on suspicion of harassment and disorderly conduct as police in riot gear tried to get people to leave. By mid afternoon, only a few dozen people remained.

In Honolulu, about 100 protesters lined the road outside the state Capitol waving American and Trump 2020 flags at passing cars.

Sheryl Bieler, a retiree, said she came out to “support our president and support the integrity of the elections.”

Trump supporters circled the state Capitol in Madison, Wisconsin, in cars and trucks adorned with Trump and U.S. flags for several hours on Wednesday.

In Colorado, Denver Mayor Michael Hancock ordered city agencies to close buildings after hundreds gathered in front of the Capitol building for a protest against the election results.

In South Carolina, protesters supporting Trump came to the Statehouse but left before the U.S. Capitol was breached.

In Arizona, armed protesters marched at the Capitol in Phoenix.

Still Can ‘Have a Lot of Breakthrough Infections’ with ‘Most’ Vaccinated,...