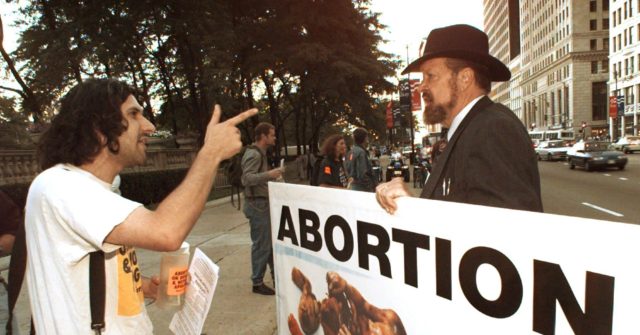 Joseph Scheidler, a man who left his career in public relations to become a full-time pro-life activist after the Supreme Court ruled in favor of abortion in Roe v. Wade, died Monday morning at the age of 93.

The national director of the Pro-Life Action League, Scheidler was dubbed the “Godfather” and the “Green Beret” of the movement after he published his book CLOSED: 99 Ways to Stop Abortion in 1985.

Scheidler’s leadership and influence in the pro-life movement was clearly defined after he became the target of a federal lawsuit that ultimately won the rights of pro-life activists to protest in front of abortion clinics.

Eric Scheidler, his oldest son, who serves as the League’s executive director, said in a statement:

My father’s proudest accomplishment was the pro-life work of those he inspired to take an active role in the fight against abortion, the greatest injustice of our time. For years, people have been telling me about the talk or protest where they met my father, and how his words and example prompted them to do more than just talk, but to take responsibility for addressing the injustice.

“It’s fitting that my father died on the day when Americans remember the legacy of Martin Luther King,” Eric Scheidler added. “Seeing the impact that regular Americans could have by taking action against racial injustice inspired my father to mobilize Americans in the same way in the fight against the injustice of abortion.”

While a teacher at Mundelein College in Illinois, Scheidler chaperoned a group of students on a pilgrimage to march with King from Selma to Montgomery in 1965.

As his bio notes, Scheidler also produced the videos “Meet the Abortion Providers” and “Abortion: The Inside Story,” which highlighted the testimony of former abortionists about what happens inside abortion clinics.

Scheidler’s memoir, Racketeer for Life: Fighting the Culture of Death from the Sidewalk to the Supreme Court, was published in November 2016.

The book’s title referred to the fact that Scheidler was the chief defendant in the Racketeer Influenced and Corrupt Organizations Act (RICO) lawsuit that was filed against him and other pro-life activists in 1986 by the National Organization for Women (NOW).

In NOW v. Scheidler, the feminist organization and two abortion clinics alleged Scheidler and the other activists violated the Sherman-Clayton anti-trust laws and obstructed interstate commerce by attempting to close down abortion clinics.

The case has been to the Supreme Court three times. In 1994 a 9-0 decision allowed the case to go forward to trial as a civil RICO action. In 2003, the Supreme Court ruled 8-1 to overturn the District Court jury’s 1998 guilty finding against Scheidler and his co-defendants. And in 2006, the Supreme Court unanimously ruled again in favor of Scheidler, putting to rest an effort by NOW to keep the case alive in the Seventh Circuit.

The win ultimately secured the rights of pro-life advocates across the United States to protest outside of abortion clinics.

Scheidler was also the co-founder of the pro-life legal firm, the Thomas More Society.

Tom Brejcha, president, chief counsel, and founder of the firm said in a statement sent to Breitbart News:

Joe was our raison d’etre – the only reason and sole cause for the Thomas More Society’s coming into existence. His unduly long, litigious persecution on the part of the National Organization for Women and the nation’s abortion industry – which lasted over nearly three-decades in a landmark court battle, NOW v. Scheidler – was the crucible in which our Thomas More Society was forged.

“Joe advocated for life by both his word and his deeds,” Brejcha added, noting that Scheidler’s wife, Ann, is the chairman of the Thomas More Society.

Father Frank Pavone, national director of Priests for Life, recalled about his friend and colleague in a statement sent to Breitbart News:

I was a new parish priest in the late 1980s when I first contacted Joe Scheidler, whose work I knew of through his newsletters and his book, Closed: 99 Ways to Stop Abortion. That was the start of our long collaboration, looking for ways to end the legal killing of children.

Janet Morana, executive director of Priests for Life, remembered Scheidler as “the godfather of the pro-life movement.”

“I always called him Godfather when I spoke to him,” Morana said. “In our early years, he was one of the people who taught us how to be pro-life activists. He was an inspiration to us and gave us practical advice drawn from his many years as a passionate and fearless champion of the unborn.”

Upon learning of Scheidler’s death, Abby Johnson, founder and director of And Then There Were None, said in a statement that he was “a true hero”:

He was a giant in my own life and I’m so grateful to have spent time with him and to have listened to his wisdom. There aren’t many people who I hope to earn their respect in this life but Joe was one of them. I don’t know if I ever did earn his respect but I know he always had mine. Not only was he influential in the pro-life movement but he was also a giant in the pro-choice movement, framing many of the decisions they made.

Scheidler is survived by his wife Ann, seven children, 26 grandchildren, and one great-granddaughter.

“With the death of Joe Scheidler, the pro-life movement has lost a warrior champion, and we have lost a dear friend,” Brejcha said. “We rejoice in the truth that Joe so fully deserved to hear these words, ‘Well done, good and faithful servant.’”