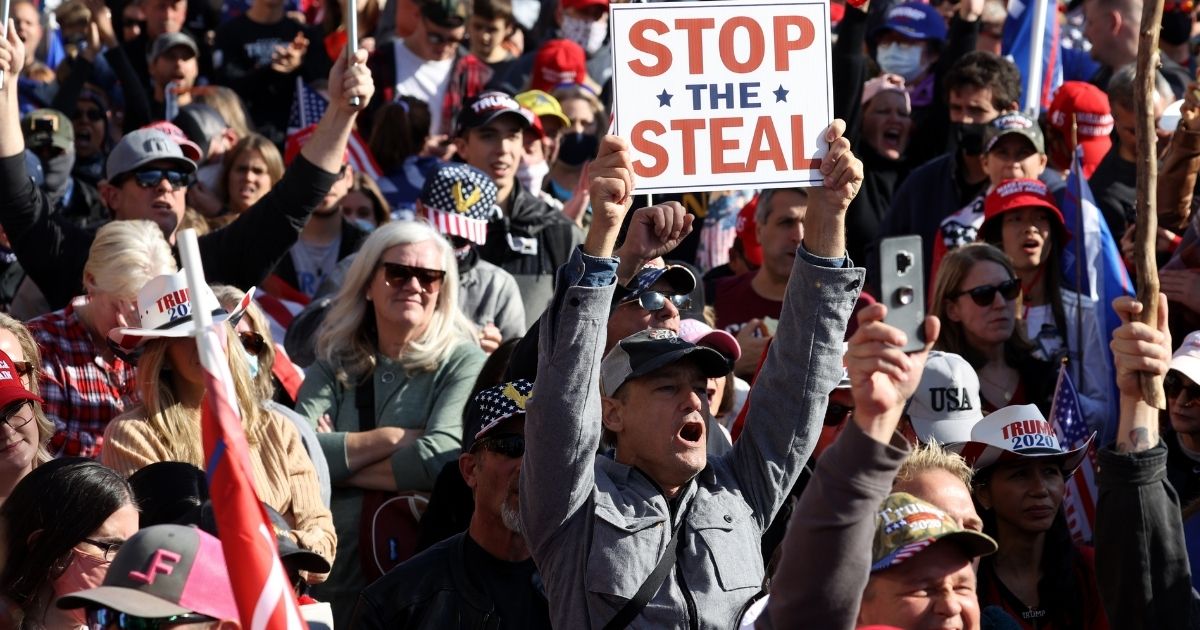 In a high-decibel reminder to anyone needing it that loyalty runs deep among many of the more than 70 million Americans who voted for President Donald Trump, Washington D.C. blossomed in red, white and blue Saturday for the “Million MAGA March.”

Trump, in the kind of gesture that proves to his supporters they mean as much to him as he does to them, drove past the marchers, giving them a thumbs-up and waving from the presidential limo.

Many at the march scoffed at the election results that have led many mainstream news organizations to project that Democrat Joe Biden will be America’s next president.

Signs read, “Stop the Fraud” and “Best Prez Ever” as marchers chanted “Four More Years!” according to Fox News.

“This election was stolen from us,” Nevada activist Courtney Holland told the crowd, according to Fox.

More than one MILLION marchers for President @realDonaldTrump descend on the swamp in support.

Best base in political history — we LOVE you guys!!! ❤️🇺🇸 pic.twitter.com/vU65nqCSns

The entire crowd ERUPTS when @NickJFuentes shouts “GOD IS ON OUR SIDE!” 🇺🇸🇺🇸🇺🇸 pic.twitter.com/G3sUmK8TNh

AFTER THE MILLION MAGA MARCH IN D.C. …

WE ARE GOING HOME TO PROTEST AT ALL OF OUR STATE CAPITALS UNTIL THE OUR OFFICIALS CONDUCT AN OPEN & HONEST AUDIT OF THIS CORRUPT ELECTION! 🇺🇸🇺🇸🇺🇸

RT AND TELL A FRIEND — THIS IS NOT OVER!!! pic.twitter.com/c2ID2wJxCv

Trump supporter Tracy Lavis, sporting a red Trump flag as a sort of cape, came all the way from  Michigan for her president, according to USA Today.

“I needed to be here. We all need to show our president some support,” Lavis told the newspaper. “He needs it. He needs us. He’s been rung through the ringer since Day One.”

Trump had thanked his supporters on Friday for their loyalty.

“Heartwarming to see all of the tremendous support out there, especially the organic Rallies that are springing up all over the Country, including a big one on Saturday in D.C. I may even try to stop by and say hello. This Election was Rigged, from Dominion all the way up & down!” Trump tweeted, once again drawing a red flag from Twitter.

Heartwarming to see all of the tremendous support out there, especially the organic Rallies that are springing up all over the Country, including a big one on Saturday in D.C. I may even try to stop by and say hello. This Election was Rigged, from Dominion all the way up & down!

Hundreds of thousands of people showing their support in D.C. They will not stand for a Rigged and Corrupt Election! https://t.co/tr35WKTKM8

.@FoxNews and the Fake News Networks aren’t showing these massive gatherings. Instead they have their reporters standing in almost empty streets. We now have SUPPRESSION BY THE PRESS. MAGA! https://t.co/RMOa4jKZwA

Marcello Milone of South Carolina told USA Today he was unhappy with the way the votes were tallied.

“I don’t understand how the country went to bed with Trump up by tons of votes on election night, then days later Biden is called the winner,” he said. “It doesn’t make any sense.”

I had Andrew on last year to give people hope, before there was a sense of accountability on COVID