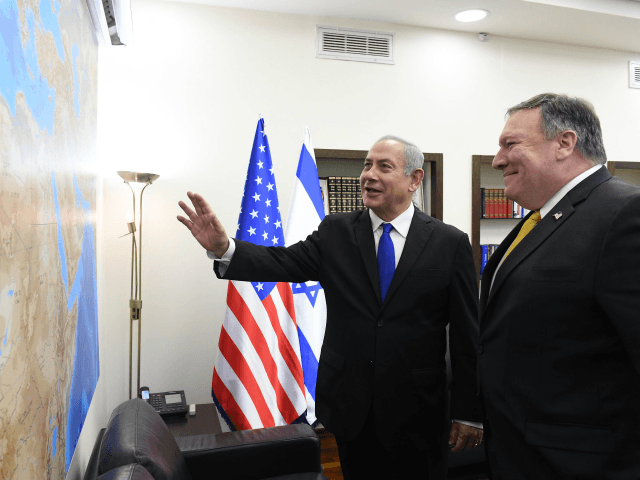 US Secretary of State Mike Pompeo will visit a Jewish settlement in Judea and Samaria (the “West Bank”) during his visit to Israel next week, making him the first secretary of state to do so, according to a prominent Israeli journalist citing Israeli and American officials.

Officials at the US Embassy and in the US Secret Service are making plans for the unusual trip to the Psagot settlement north of Jerusalem, Barak Ravid reported in the Hebrew-language Walla news site as well as in English on Axios.

Such a visit would mark a dramatic departure from U.S. policy, which until the Trump administration designated the West Bank and the Golan Heights as “occupied territories.” In January, Pompeo denounced a longstanding State Department legal opinion declaring Jewish settlements in the West Bank to be a violation of international law as “deeply flawed.” Months earlier, he issued a more tempered declaration, stating that the U.S. “no longer recognizes Israeli settlements as per se inconsistent with international law.”

It is still unclear whether the visit will be deemed a private or official visit and neither is it clear which senior Israeli official will accompany Pompeo to the settlement, Ravid said.

The U.S. State Department said Pompeo’s visit to the Jewish state, which will last three days, will constitute a kind of “legacy visit” to highlight key policy decisions that the Trump administration has made with regards to Israel. Ravid added that for Pompeo, the visit likely also has significance domestically ahead of a possible presidential bid in 2024.

Pompeo, who will be accompanied by his wife, will then pay a private visit to the Christian baptismal site “Qasr al-Yehud” near Jericho in the West Bank, considered to be Christianity’s third holiest site.

The Psagot settlement is famous for its winery, which made headlines this week after going to court against the European Union’s policy of labeling products made by Israelis in the settlements. One of the winery’s main investors is Jewish-American businessman and owner of Duty Free America, Simon Falic. Falic is also a donor to several politicians in the Republican Party as well as to Prime Minister Benjamin Netanyahu.

After Pompeo disavowed the Jimmy Carter-era memo deeming settlements illegal, the owner of the Psagot winery named a new series of wine after the secretary of state and sent him a case of the wine.

During his tenure as secretary of state, Pompeo has attended events organized by Falic, including the evangelical Family Leadership Summit in Des Moines, Iowa. According to blogger Joel Rosenberg, Falic called on Pompeo during the event to help Israel apply sovereignty over the West Bank.

Pompeo will also visit the Golan Heights during his visit. In March of last year, President Donald Trump announced that the U.S. would recognize Israeli sovereignty over the strategic plateau. The Israeli government responded by announcing the establishment of a new town called “Trump Heights.”

Pompeo in the past also broke from U.S. policy by addressing the Republican National Convention from Jerusalem. He also became the first top American diplomat to make an official visit to the Western Wall in Jerusalem.

In October 2017, U.S. Ambassador to Israel David Friedman attended a business forum in an official capacity in the West Bank settlement town of Ariel, the first such visit from a U.S. government representative.

“By making an official public appearance at an event in an Israeli West Bank settlement, Ambassador Friedman once again crossed a major, longstanding red line of bipartisan US policy,” J-Street Vice President of Government Affairs Dylan Williams said at the time.

“The Trump administration continues to send a clear message of support for the settlement movement and the agenda of the Israeli right,” he said.

You Can Go Make Solar Panels