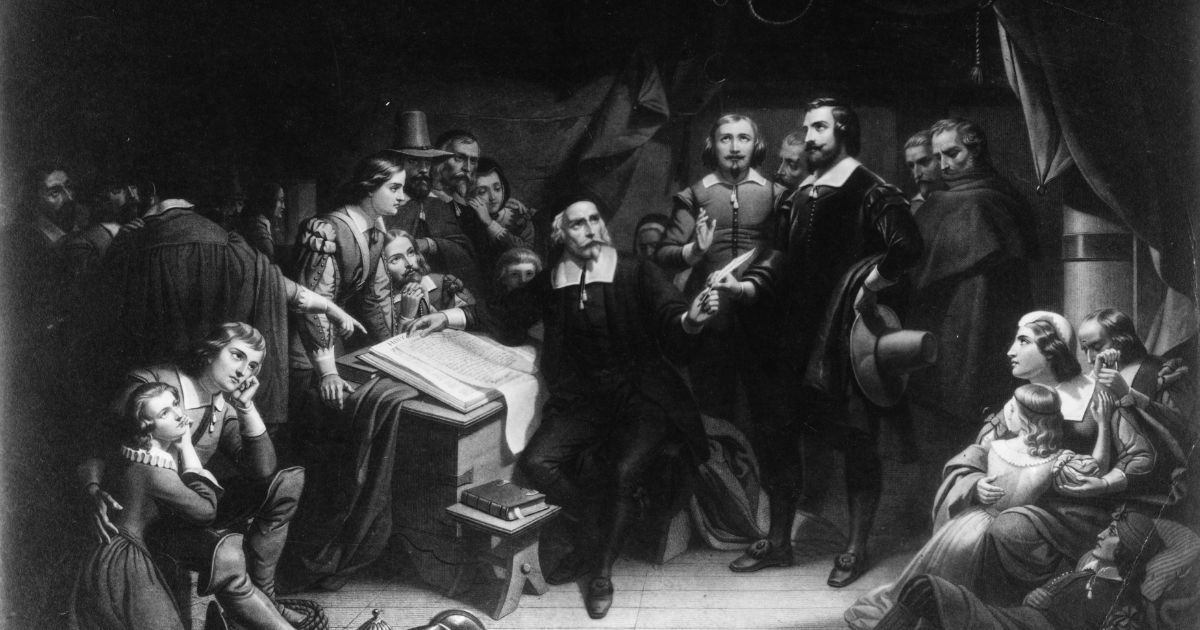 Nov. 11, 2020, marked the 400th anniversary of the Pilgrims’ arrival at Cape Cod, Massachusetts, and signing of the Mayflower Compact.

For clarity’s sake, under our current calendar the day actually falls on Nov. 21, due to Great Britain and its colonies not recognizing an update to the Gregorian Calendar until 1752.

But to the Pilgrims in 1620, it was Nov. 11, as William Bradford, who would become governor of Plymouth Colony, recorded in his account “Of Plymouth Plantation.”

The two-month sea journey had been a rough passage, and the Pilgrims were grateful to be on land again.

“Being thus arrived in a good harbor, and brought safe to land, they fell upon their knees and blessed the God of Heaven who had brought them over the vast and furious ocean, and delivered them from all the perils and miseries thereof, again to set their feet on the firm and stable earth, their proper element,” Bradford wrote.

“Being thus passed the vast ocean, and a sea of troubles before in their preparation … they had now no friends to welcome them nor inns to entertain or refresh their weatherbeaten bodies; no houses or much less town to repair to, to seek for succour,” he added of the 102 passengers aboard the Mayflower.

Just 41 were actually Pilgrims, religious separatists seeking freedom from the Church of England. The others were merchants, craftsmen, indentured servants and orphaned children.

“What could now sustain them but the Spirit of God and His grace?” Bradford asked.

“May not and ought not the children of these fathers rightly say: ‘Our fathers were Englishmen which came over this great ocean, and were ready to perish in this wilderness; but they cried unto the Lord, and He heard their voice and looked on their adversity.’”

Then, drawing from the Psalms, he concluded, “therefore praise the Lord, because He is good: and His mercies endure forever.”

Not only had the Pilgrims arrived in a strange land, but they had been blown off course, far north of the territory governed by the Virginia Company which had been their intended destination.

“And the Pilgrims say, ‘Well, who’s going to be in charge?’ There is no king-appointed person on our boat,” American history author William Federer told The Patriot Project.

In order to secure their liberty — “for none had power to command them” in New England, Bradford wrote — 41 of the Mayflower’s male passengers agreed to enter into a contract of self-government.

400 years ago today, America’s great experiment in self-rule began. On Nov. 11, 1620 — more than 160 years before the Constitution — the Mayflower Compact was signed and became the first attempt at democracy in the New World. @JosephLoconte https://t.co/OmUtmbv2G8

RELATED: Bad News for Dems: Kamala Harris Wouldn’t Be First VP of Color – It Was a Republican Elected Over 90 Years Ago

The Mayflower Compact, adopted on Nov. 11, was their pledge to “covenant and combine ourselves together into a civil body politic; for our better ordering, and preservation and furtherance of the ends aforesaid.”

Federer described the compact as “simple, revolutionary” and a “polarity change in the flow of power.”

“Instead of top down, rule by kings, it’s rule bottom up by we [the people],” he said.

The Pilgrims did something unique. “They give themselves the authority to start a government,” Federer said.

The model came directly from the Pilgrims’ congregational style of church governance, in which the people chose their pastors and elders rather than the Church of England or the Roman Catholic Church.

The self-government birthed in New England would have a great influence on the American Revolution, when the Founding Fathers entered into a covenant akin to the Mayflower Compact, first with the Declaration of Independence and later with the Constitution.

The Pilgrims had enacted their covenantal form of self-government 50 to 70 years before the Enlightenment (which also influenced the Founding generation) ever began, Federer pointed out.

So here’s to the Pilgrims, who were the first to establish government “of the people, by the people, for the people” on America’s shores.

May generations yet to come enjoy the incredible blessings of liberty.