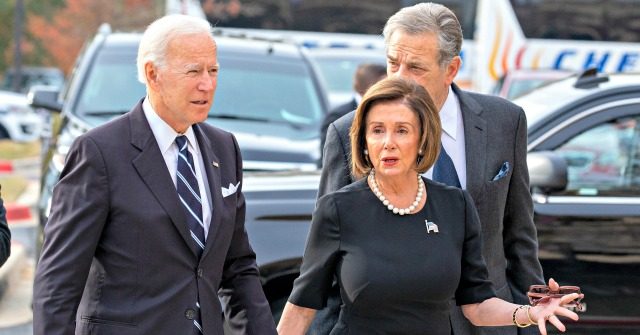 House Speaker Nancy Pelosi seemed to undermine on Thursday a claim Democrats and the media are making that several legal challenges to the election results will hamper a Joe Biden “transition.”

Miles Taylor, the former Trump administration underling billed by the New York Times as a one-time anonymous “senior administration official” spilling secrets, was a part of a group to claim a delay would be a “national security issue.”

Over 100 Democrats and Republicans joined Taylor to demand Trump concede and begin transferring power to Biden.

“We are fortunate that it is former vice president Biden who is coming in and is prepared in the national security arena, but it is dangerous,” U.S. Rep. Peter Welch (D-VT) told the Boston Globe. “The peaceful transition of power has been the hallmark of our democracy for 200 years.”

Ellen Weintraub, a Democrat member of the Federal Election Commission, took to Twitter to claim a delay “deals damage to the Biden Administration’s ability to hit the ground running in January.”

The next Administration faces historic and immediate challenges the moment it takes office. Every day – every hour – that @GSAEmily fails to ascertain President-Elect Biden's apparent victory deals damage to the Biden Administration's ability to hit the ground running in January. pic.twitter.com/aRIKwHONna

But Pelosi on Thursday downplayed any effect a delay may have.

Citing a claim by then Vice President-elect Dick Cheney that the court challenge by then-Vice President Al Gore went into mid-December and hampered the Bush transition, Pelosi said, “I think Biden, having been the vice president of the United States and the chairman of the foreign affairs committee and the chairman of the judiciary committee, he knows the territory, so he’s going to be just fine in the transition.”