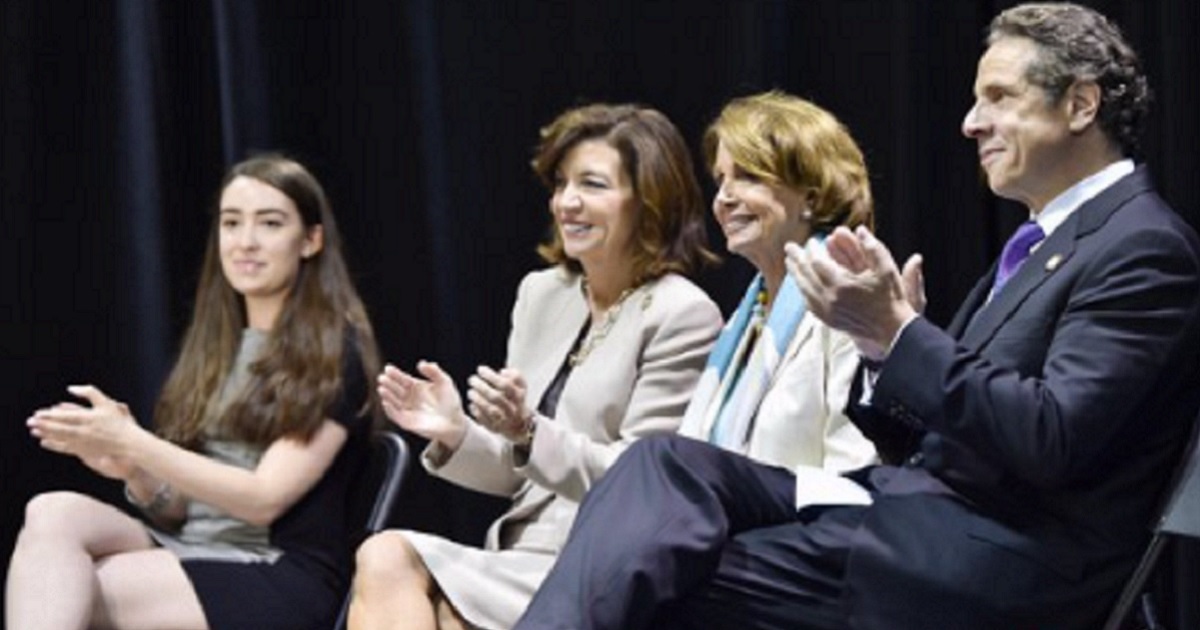 It’s one picture Nancy Pelosi can’t be pleased with — and the timing is even worse.

As New York Gov. Andrew Cuomo’s sexual harassment scandal worsens, with a third woman coming forward to lodge a public complaint against the one-time Democratic darling of the mainstream media, a photo is making the rounds on social media of Pelosi sharing a stage with Cuomo at a 2015 event.

The occasion? A panel discussion on the topic of sexual assault against young women.

Too many women are sexually assaulted while in college. Joined @NYGovCuomo to discuss why #EnoughIsEnough! pic.twitter.com/nDSkT3fTYj

TRENDING: Pelosi Teaming Up with Cuomo for a Message on Sexual Assault Doesn’t Look So Good Now

“Too many women are sexually assaulted while in college,” a 2015 tweet from Pelosi stated. “Joined @NYGovCuomo to discuss why #EnoughIsEnough!”

Now that the very same @NYGovCuomo whom Pelosi was so proud to be sitting next to six years ago is the subject of first one, then two and now three accusations of sexually harassing much younger women, it raises the question of just when #EnoughIsEnough when it comes to prominent Democratic politicians.

And there are few in the country outside the federal government who are more prominent than Andrew Cuomo.

Not only is he in his third term as governor of one of the country’s most populous states, but he’s also so solidly on the left when it comes to core Democratic issues that he signed a bill in 2018 that provides for virtually unlimited late-term abortions. (And ordered the new World Trade Center lit up in pink lights to celebrate the appalling achievement.)

Do you think Andrew Cuomo will make it through his term of office?

And while his performance during the coronavirus pandemic has been a disgrace by any measure — his March 2020 order requiring nursing homes to accept COVID-19 patients is reportedly under FBI investigation — he has been lauded by a mainstream media that despises Republicans, has written a book bragging about his leadership, and has even won an Emmy for his daily briefings on the crisis.

Maybe more disturbingly, he was the subject of a trending term, “Cuomosexual” — a vaguely obscene self-description for liberals like “The Daily Show’s” Trevor Noah and talk show host Ellen Degeneres utterly besotted with the Empire State’s chief executive.

Now, however, that prominence is taking its toll with a vengeance as women have come forward with troubling descriptions of Cuomo’s behavior — two in the workplace, one in a social situation.

And Pelosi’s social media post from almost six years ago is coming back to haunt the House speaker as conservatives ask when, exactly, enough is enough when it comes to Democrats.

So when are you calling for his resignation, Madam Speaker? https://t.co/NmHqhZH1V3

Democrats love posing as the champion of women and minorities as long as it’s politically convenient.

When deeply suspect accusations arose against then-Supreme Court nominee Brett Kavanaugh back in September of 2018, for instance, there was no stopping the outpourings of outrage from the left side of the aisle.

The fact that the accusations were beyond hazy — based on an event that supposedly took place some 35 years earlier, at a location the accuser couldn’t remember, with absolutely no corroborating witnesses or evidence — made no difference to the baying hounds of Democrats or their mainstream media enablers bent on destroying a man they detested for political reasons.

In fact, Andrew Cuomo himself called the accusations against Kavanaugh “very compelling,” as the New York Post pointed out last week, and even demanded that Kavanaugh, then a federal judge on the D.C. Court of Appeals, take a lie detector test to prove his innocence.

Is anyone betting Andrew Cuomo is going to be sitting for a polygraph any time soon?

What makes the Pelosi picture with Cuomo particularly compelling is that it was taken at an event discussing sexual assaults of college women.

The second woman who came forward with a public accusation against Cuomo was barely out of college when the event she described took place. (In fact, the woman, Charlotte Bennett, was 25 in June when she had what she described as a sexually charged conversation with Cuomo. She would have been in college about when Cuomo and Pelosi were sharing that stage.)

The 63-year-old Cuomo, it should be noted, has described his part in the workplace conversations as “playful.”

“I mean no offense and only attempt to add some levity and banter to what is a very serious business,” he said in a statement on the governor’s office website.

To be clear, he deserves the same benefit of the doubt that liberals never accorded Kavanaugh or Donald Trump when sexual accusations arose, and — it’s a good bet — will never afford any Republican or conservative who is the subject of a similar complaint.

But for Nancy Pelosi, her political party and the mainstream media that supports them, the picture is not pretty. Andrew Cuomo, the object of adoration for so many “Cuomosexuals” on the left, the champion of women’s rights who lights up public buildings to celebrate late-term abortion laws, was already the subject of complaints from women alleging tawdry, downright creepy remarks.

On Monday, the same day that a third complaint became public, a picture emerged of Pelosi and Cuomo at an event apparently meant to demonstrate Democratic commitment to protecting women.