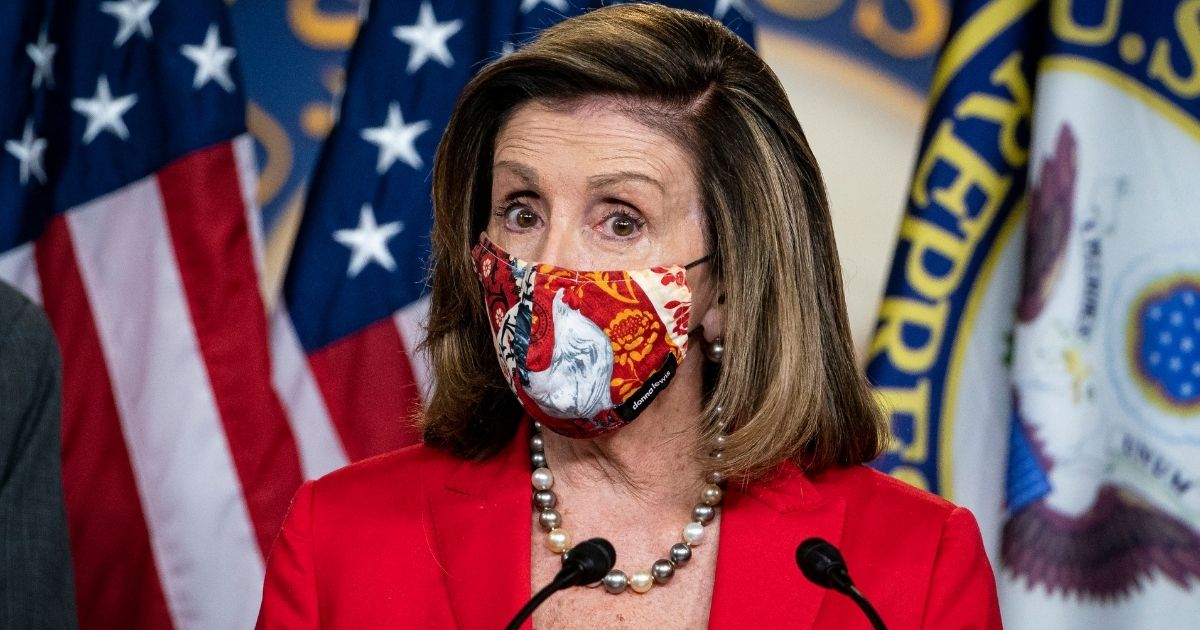 Most Americans were glued to the TV for at least some of the past hundred or so hours watching election results. I would venture that House Speaker Nancy Pelosi has probably watched more of it than the average American.

So, maybe she was watching at some point in the coverage that we all missed in which Joe Biden had secured a “mandate” for his agenda.

Or maybe she missed the point. Whatever the case, Pelosi came out during a Friday news conference and told America she was “so officially pleased with the outcome that is imminent” and spun a close election as a landslide of sorts.

“This morning, it is clear that the Biden‑Harris ticket will win the White House.

This election is historic, propelled by the biggest vote ever in the history of our country, 73.8 million and counting Americans, the most votes ever received by any presidential ticket in history,” Pelosi said.

“President‑elect Biden has a strong mandate to lead, and he’ll have a strong Democratic House with him and many Democrats in the Senate. This has been a life‑or‑death fight for the fate of our democracy, as he says, ‘the soul of our country.’ We did not win every battle in the House, but we did win the war.”

Pelosi on Biden’s apparent victory: “This has been a life or death fight for the fate of our democracy, as he says, the soul of our country. We did not win ever battle in the House, but we did win the war.” pic.twitter.com/a2GDHpYhGJ

That’s a curious statement given the facts of the matter.

Do you agree with Nancy Pelosi?

As of Saturday morning, major news organizations called the race in Biden’s favor.

However, The Western Journal has not called the race since “there are numerous court challenges and potential recounts that must be resolved before any state can certify its results, and therefore before any responsible news outlet can call several contested states for Biden or for President Donald Trump.”

As for a “strong Democratic House,” ask the other members of the Democratic caucus, who apparently shouted and cried during a post-mortem conference call in which Pelosi and her top lieutenants tried to wrangle with a disappointing result on Election Day.

For instance, take Rep. Abigail Spanberger, a more centrist Virginia Democrat who’s claimed victory despite the fact her race hasn’t been officially called as of Saturday morning. According to The Washington Post, she reacted “heatedly” to the party’s messaging.

Rep. Rashida Tlaib of Michigan, on the left of the party, angrily told those upset with the party’s underwhelming performance and problematic messaging that “it sounds like you are saying stop pushing for what black folks want.”

And then, according to Politico, you had the lachrymose Rep. Debbie Mucarsel-Powell of Florida, who was moved to tears by Democrats who were “tweet[ing]” barbs at one another.

In short, does this sound strong to you?

In the Senate, meanwhile, the Democrats have managed a net gain of one seat when they were predicted to pick up several more. Their hopes now rest upon winning two Georgia runoffs, something that would be difficult even without an energized Republican base.

This, again, wasn’t the predicted outcome, particularly with vulnerable GOP incumbents like Sens. Susan Collins of Maine, Joni Ernst of Iowa and Thom Tillis of North Carolina all appearing to have held on to their seats.

And then there are Pelosi’s statements about Biden and how he “has a strong mandate to lead.” She bases this on several facts, all of them misleading. Sure, Biden will have “the biggest vote ever in the history of our country, 73.8 million and counting Americans.”

That’s because there was a high turnout in this election. President Trump also has over 70 million votes, which would mean he would have the biggest popular vote for any loser in presidential history.

But that’s not what matters — and if Biden holds serve in the states where he’s currently ahead, he’ll end up with 306 electoral votes, according to the Washington Examiner. That’s the same total that Donald Trump won back in 2016. (Two individuals were faithless electors, leaving him with 304 votes in the final tally.)

I know it’s been four years, but remember the mockery and derision when he tweeted this out?

In addition to winning the Electoral College in a landslide, I won the popular vote if you deduct the millions of people who voted illegally

This wasn’t Trump’s best moment, especially considering that was close to the 10 tightest presidential races of all time. No. 10 is 1968, where Richard Nixon won a little over 55 percent of the electoral votes with 301, with Hubert Humphrey taking 191 and George Wallace winning 46.

If Biden doesn’t win one of the states where he’s ahead, it could well be a lot closer than that.

In the case of Trump, however, he hit 306 with no political experience, no political machine, roughly half the cash of his opponent and the media arrayed against him.

Joe Biden had every advantage possible in 2020 and the best estimate is that he’ll get — 306 electoral votes, having grossly underperformed at both the state and national level.

This was supposed to be a leveling “blue wave” election. It wasn’t. If the Democrats don’t pick up both Georgia seats, there are questions about Biden’s mandate to even get a cabinet filled out, much less to pursue his legislative agenda.

The House Democrats are about an inch away from a socially distanced “Lord of the Flies” on their conference calls.

It’s for the best Speaker Pelosi delivered these remarks from behind a mask since I doubt even she could have given that mandate talk with a straight face.