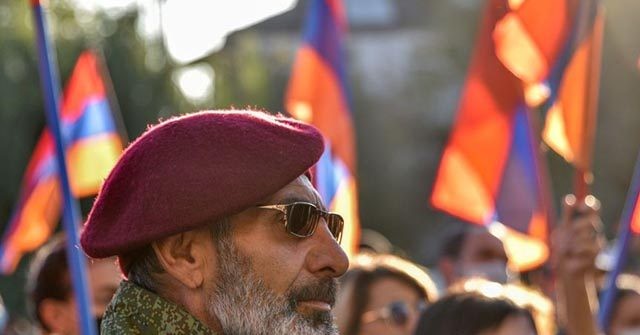 Dozens of cars leaving Nagorno-Karabakh for Armenia’s capital, Yerevan, lined a country road leading out of the war-torn territory on November 11.

The cars were filled with people fleeing the contested region after recent fighting there between Armenia and Azerbaijan ended in a peace deal on November 10, under which Armenian forces ceded some territory to Baku.

Most people leaving Nagorno-Karabakh for Yerevan traveled on a road that “passes through Kalbacar, a corridor formerly held by Armenia but now controlled by Azerbaijan” under the Russian-brokered peace agreement, Radio Free Europe/Radio Liberty’s (RFE/RL) Armenian service reported on Thursday.

RFE/RL sent a reporter to the Kalbacar corridor on Wednesday to interview people as they waited in their cars to exit Nagorno-Karabakh, many at a near standstill on the packed road.

“Most of the people interviewed by RFE/RL said they were leaving Nagorno-Karabakh for Armenia. While disappointment prevailed, some hoped that Yerevan would restore the territorial control it had before the deal,” the U.S. government-funded broadcaster noted.

“Now that Kelbajar and all other districts have been given to [Azerbaijan], we will remain under the same blockade as [before 1992],” one man in a truck told the reporter.

“[Azerbaijan] will give us a narrow road, but no one knows [how safe it will be]. There is no point in continuing to live there. There is no future there,” he added.

“It’s not our decision [to leave Nagorno-Karabakh]. We have been forced to move out,” a woman in a different vehicle told the reporter. “We are from Akanaberd. They forced us to move out.”

RFE/RL asked the woman and her male companion if their village “is to be ceded to Azerbaijan under the new map.”

“Yes,” the two replied in unison.

When asked by the reporter what the current situation was like in Akanaberd, the woman replied, “Almost no one was left there. Almost everyone has fled. The few who were remaining are leaving now.”

Another man interviewed by RFE/RL told the broadcaster that the situation in Nagorno-Karabakh is “peaceful now.”

“People are moving out. They feel disappointed,” he told the reporter, adding that he still holds out hope that he might return to his home village one day.

“All of us have this hope,” he said. “I fought in the first war [in the 1990s] and was wounded. My son fought in this war, and he was also wounded. We all hope to get [the territories] back again.”

According to the peace deal, Azerbaijan will retain territory it captured in Nagorno-Karabakh and the surrounding area it gained during the most recent fighting over the region. The agreement stipulates that Armenian forces must surrender some areas they held outside of Nagorno-Karabakh’s borders, including Agdam district in the east and Kalbacar in the west.

“Armenians will also forfeit the Lachin region, where a crucial road connects Nagorno-Karabakh to Armenia. The agreement calls for a 5-kilometer wide area in the so-called Lachin Corridor to remain open and be protected by around 2,000 Russian peacekeepers,” RFE/RL reported.

Russia dispatched border services to the region to monitor a newly built transport corridor passing through Armenia that connects Azerbaijan to its western exclave of Naxcivan. The exclave is surrounded by Armenia, Turkey, and Iran.

Russia’s Ministry of Defense said on November 10 that it had already deployed more than 200 Russian peacekeepers to the Nagorno-Karabakh area.

“As of now, 12 Il-76 military transport planes carrying officers from the command of Russian peacekeeping force and military from units of the 15th peacekeeping brigade, have already landed in the Republic of Armenia,” the ministry said in a statement, as reported by TASS.

The latest fighting over Nagorno-Karabakh began on September 27. The breakaway region legally belongs to Azerbaijan but has been ruled by ethnic Armenian separatists since they seized the region in 1991 after the fall of the Soviet Union. After the seizure, a three-year war between the two sides ensued, resulting in nearly 30,000 casualties. An uneasy 1994 ceasefire ended the war, though sporadic skirmishes over the territory have occurred periodically since then. The most recent clashes over Nagorno-Karabakh caused the greatest number of casualties in fighting over the region since the post-Soviet war.