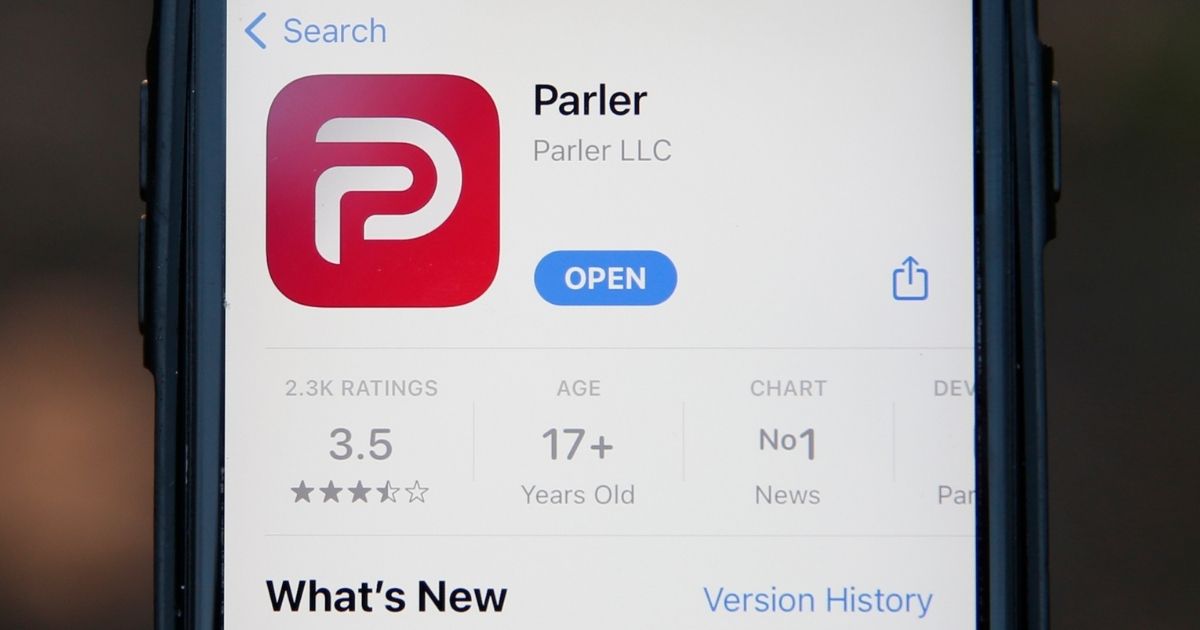 Days after the Jan. 6 Capitol riot, tech titans Google and Apple removed the app for social media platform Parler from their stores. The companies claimed that Parler, a favorite among conservatives, failed to monitor posts for violent content. This move was immediately followed by Amazon Web Services’ decision to suspend the rapidly growing site from its servers.

Last week, Parler fought back by filing a lawsuit against Amazon that accused the company of “breach of contract and violating an antitrust law.”

Parler.com came back online Sunday evening, according to Reuters.

The site doesn’t have any functionality and its app remains unavailable in stores, but CEO John Matze posted a message to “lovers and haters” of his platform.

Matze wrote, “Hello world, is this thing on?”

“Now seems like the right time to remind you all — both lovers and haters — why we started this platform,” he said under a “Technical Difficulties” header. “We believe privacy is paramount and free speech essential, especially on social media. Our aim has always been to provide a nonpartisan public square where individuals can enjoy and exercise their rights to both.

“We will resolve any challenge before us and plan to welcome all of you back soon. We will not let civil discourse perish!”

Prior to being deplatformed, Parler saw its popularity soar.

“From Jan. 6 to 10, Parler was downloaded 997,000 times across Apple’s App Store and Google Play, which was more than 10 times the downloads the app generated from Jan. 1 to 5,” CNET reported.

The report said the app was downloaded more than 11 million times since its launch in 2018.

The power of Big Tech to control what information Americans are allowed to see cannot be overstated. Although the owners and leadership of these companies, which include Amazon, Google, Facebook, Apple and Twitter, have never been elected to public office, they have arguably become more powerful than the U.S. government.

Do you believe that freedom of speech is under attack in America?

The case can be made that the Silicon Valley giants greatly influenced the outcome of the presidential election. This goes well beyond the companies’ (and their employees) substantial contributions to Democratic campaigns. I am referring to their ability to suppress content unfavorable to their preferred candidates and to inflate (and distort) negative coverage of those they oppose.

This was never more apparent than the concerted effort by Twitter and Facebook in mid-October to block the New York Post’s explosive reporting that revealed damning emails found on the laptop of Democrat Joe Biden’s son. (Hunter Biden had left the laptop at a computer repair shop and forgotten to pick it up.) The emails supported allegations that he and his family members had profited handsomely from a foreign influence-peddling scheme.

According to the Post, in one of the emails dated April 17, 2015, Hunter Biden was thanked by an adviser to the board of Ukrainian energy company Burisma Holdings, a company that paid him between $50,000 and $83,000 per month (this figure varies among media outlets) for his services as a board member. This individual expressed his gratitude for “inviting me to DC and giving an opportunity to meet your father and spent some time together. It’s realty an honor and pleasure.”

Big Tech also suppressed the story that Hunter Biden’s “tax affairs” had been the subject of an investigation, opened in 2018, by the U.S. Attorney’s Office in Delaware. Joe Biden’s response: He was “deeply proud of his son, who has fought through difficult challenges, including the vicious personal attacks of recent months, only to emerge stronger.”

The Washington Examiner’s Paul Bedard discussed how voters’ knowledge of these and other stories prior to the election may have impacted its outcome.

“In one survey for MRC [Media Research Center] by McLaughlin & Associates, enough of Biden’s voters would have switched their selection had they known about his son Hunter’s money scandal to give Trump a victory,” Bedard wrote. “In that poll, 4.6% of Biden’s voters said they would not have selected him had they been aware of his son’s China money affair.

“In the second, done by the Polling Company for MRC, 17% of voters would have shifted away from Biden had they known about Biden’s scandals and Trump’s achievements.”

Whatever one’s opinion of Donald Trump, the hypocrisy of the Big Tech companies is glaring. These companies allow members of the Chinese Communist Party, incendiary figures such as Iran’s Ayatollah Khamenei and violent groups such as antifa a voice on their platforms, but they deny the president of the United States.

Conservative commentator Dan Bongino, an early investor in Parler, spoke about the company’s situation on Fox News’ “Hannity” on Jan. 11, one day after Amazon shut down the site. He told host Sean Hannity that the “Big Tech/Big Government symbiote  … is now in open war with free speech and civil liberties in America.”

“These tech companies are more powerful than the government and will have a more pernicious effect on civil liberties by engaging in open war with free speech like they’re doing right now,” Bongino argued.

Freedom of speech, one of the most cherished American liberties, is under direct attack by a handful of corporations run by ruthless oligarchs with an insatiable appetite for power. We need to fight back now.

Bongino vowed that Parler will move through this and emerge stronger. I believe him.

Readers concerned about continued access to truth-based journalism and commentary in this era of Big Tech censorship — and who isn’t? — are encouraged not only to sign up for The Western Journal’s email newsletters here, but also to support The Western Journal by becoming a subscriber here. We also strongly recommend downloading the Superfeed app here. And finally, The Western Journal can be found, at least for now, on Gab and MeWe.