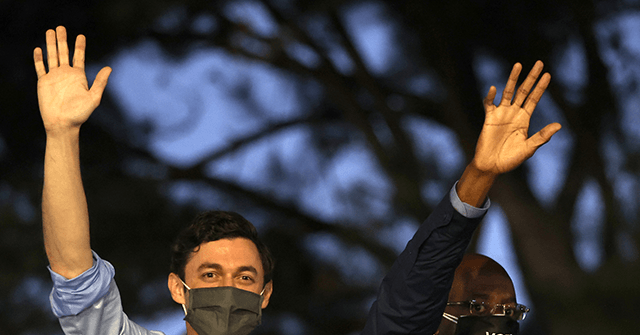 Outside groups are gearing up to buy ad reservations in Georgia before the Senate runoffs, according to data from the ad tracking firm AdImpact.

“The flood of outside money comes as Democrats and Republicans battle for the two GOP-held seats, which with the Senate currently at a 50-48 majority for the next Congress will determine which party controls the upper chamber,” the Hill reported.

Since the primaries began in 2019, the two races combined have seen $206 million of political media spending, the outlet said, adding that the number is expected to climb in the remaining weeks leading up to the runoff elections in early January:

Data from the tracking firm for the race between Sen. David Perdue (R), who is running for a second term, and Democrat Jon Ossoff, shows a massive spike in money already reserved for advertisements in the final month-and-a-half sprint.

Perdue released a campaign advertisement on November 13 revealing the Democrats’ call to take “total Democratic control” through the U.S. Senate majority, according to Breitbart News.

In a statement on Friday, Perdue campaign manager Ben Fry said that Ossoff would be “a rubber stamp for Nancy Pelosi, AOC, and Chuck Schumer in their bid to horrifically change America.”

“David Perdue is our last line of defense against efforts to give voting rights to illegal immigrants, defund the police, pack the Supreme Court, and take away private health insurance coverage. We must reject this radical takeover on January 5th — and save America,” he concluded.