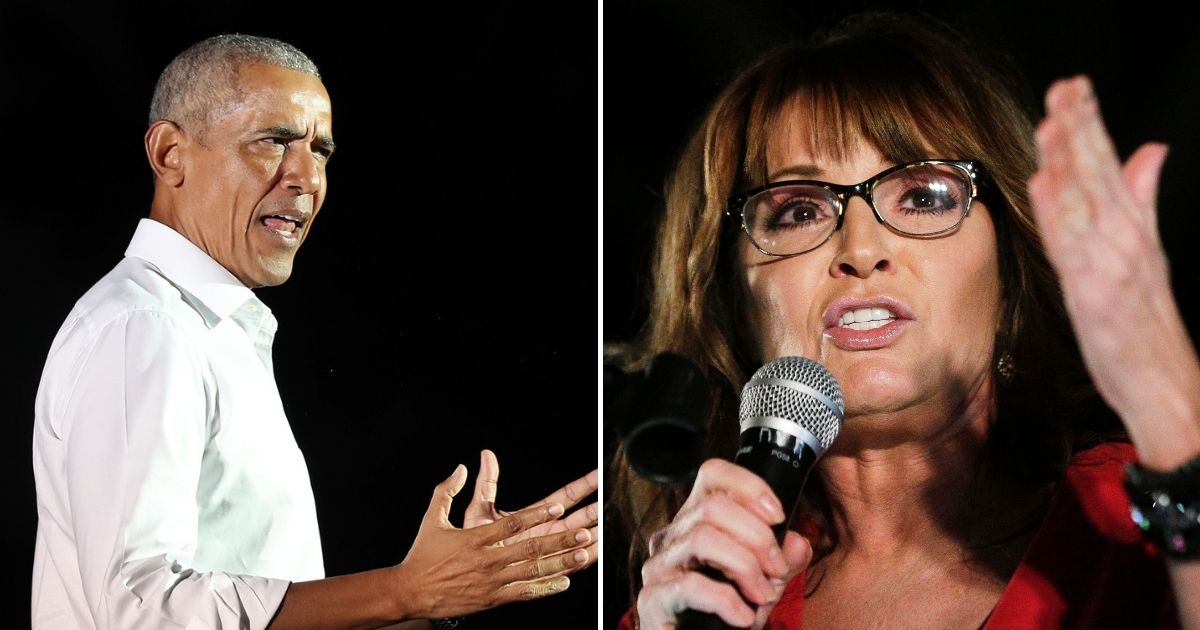 Former President Barack Obama reportedly blames Sarah Palin for bringing “dark spirits” to the Republican Party in a new memoir which has yet to be published.

In the 768-page book, titled “A Promised Land,” Obama went after the former Alaska governor and 2008 GOP vice presidential nominee, according to CNN, which obtained an early copy of the memoir.

Obama, according to excerpts, wrote that 2008 Republican presidential nominee John McCain’s decision to add Palin to his ticket brought racism and paranoia, among other things, ” to center stage.”

“Through Palin, it seemed as if the dark spirits that had long been lurking on the edges of the modern Republican Party — xenophobia, anti intellectualism, paranoid conspiracy theories, an antipathy toward Black and brown folks — were finding their way to center stage,” Obama wrote.

Obama also speculated, according to the copy of the book, that had McCain been given the chance for a do-over, he would not have chosen Palin as a running mate.

“Obama writes that he ‘wonder(s) sometimes’ about whether 2008 Republican nominee John McCain would still have picked Palin if he had known ‘her spectacular rise and her validation as a candidate would provide a template for future politicians, shifting his party’s center and the country’s politics overall in a direction he abhorred,’” according to CNN.

“I’d like to think that given the chance to do it over again, he might have chosen differently,” the former president wrote.

He added, “I believe he really did put his country first.”

The 44th president didn’t reserve his political criticism for just Palin, though.

Do you think Obama is still bitter about Trump’s 2016 election win?

Obama also lashed out at President Donald Trump and other Republicans in excerpts of the not-yet-released book.

The former president argued that Trump succeeded by breaking norms in a way that Republicans like Sen. Mitch McConnell, now the Senate Majority leader, and former House Speaker John Boehner, did not.

“[T]here wasn’t much difference between Trump and Boehner or McConnell. They, too, understood that it didn’t matter whether what they said was true,” Obama wrote.

He added, “In fact, the only difference between Trump’s style of politics and [McConnell and Boehner’s] was Trump’s lack of inhibition.”

RELATED: President Trump Officially Has Received More Votes than Barack Obama Ever Did

“It was as if my very presence in the White House had triggered a deep-seated panic, a sense that the natural order had been disrupted,” Obama wrote in the book.

“Which is exactly what Donald Trump understood when he started peddling assertions that I had not been born in the United States and was thus an illegitimate president,” he added.

“For millions of Americans spooked by a Black man in the White House, he promised an elixir for their racial anxiety,” Obama wrote.

According to CNN, Obama concluded that racist sentiments “migrated from the fringe of GOP politics to the center.”

Another missile attack on U.S. forces in Iraq