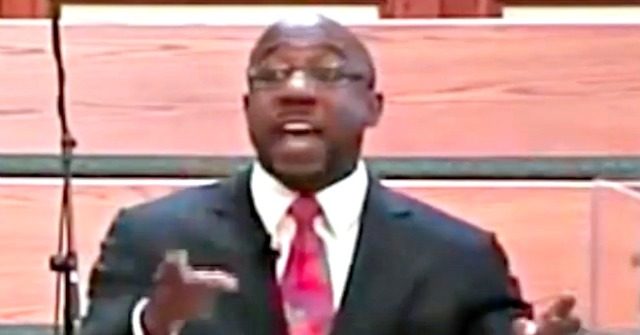 Georgia Senate Democrat candidate Raphael Warnock said during a 2011 sermon that Americans could not serve God and the military at the same time.

Warnock served as a senior pastor at the church.

Warnock currently hopes to unseat Sen. Kelly Loeffler (R-GA) during the January Senate runoff. Georgia hosts the fifth-largest active duty military population in the United States. The Peach State also has Fort Benning, one of the largest military installations in the country.

One military veteran found Warnock’s 2011 remarks very offensive to Christians who serve in the military.

Kenneth E. Brandt, a former U.S. Army National Guard chief chaplain, said, “If he’s saying you cannot be in the military and be a Christian, I will take issue with that.

I’ve met some great people in the military, young men and women in the country who have raised their right hand and took an oath to defend this country against all enemies foreign and domestic. They have a deep belief, whether it’s in God or a higher power, whatever you want to call it.

“It just makes no sense to me how you can say that, especially if you’re running in Georgia,” Brandt added.

Breitbart News has continued to report on Warnock’s controversial remarks.

Warnock in 2019 called for the mass release of prisoners, saying, “Somebody’s got to open up the jails and let our children go.”

During a 2013 speech, he called for “dismantling the prison industrial complex” as well as the creation of a “new and militant church.”